EVolution: MiniE to BMW ActiveE to BMW i3 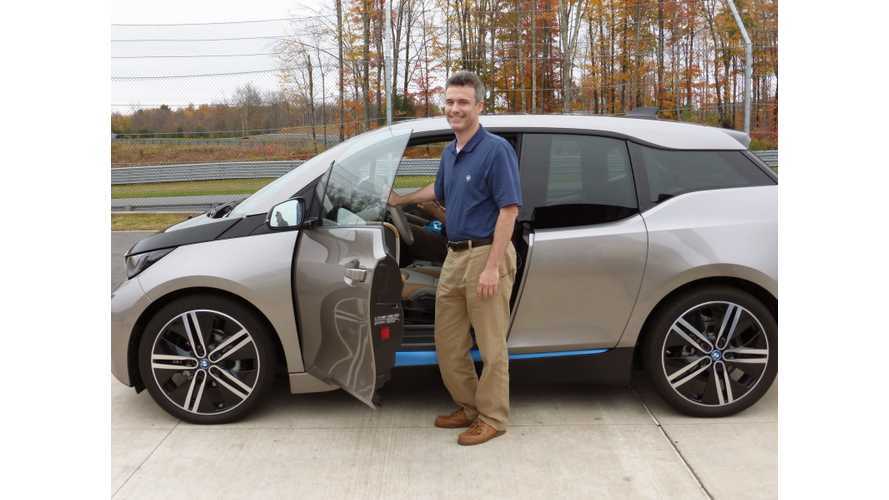 My introduction to EVs began back in the Summer of 2008 when I was lucky enough to be at an event with the AC Propulsion eBox, I even got a chance to drive it, though not very far or fast, it was enough for me to realize EVs were something special. As a car guy, performance is key.  After hours of rides in the eBox and a brief stint of driving it myself, I wanted one...simple.

I got my chance the following year when the MiniE was offered as a field trial by BMW. When the time came for me to grab one I did not hesitate. I remember the day I picked it up at the dealer, there it was, just sitting there waiting to be driven. It was a good looking package, subtle yellow plug graphics, a badge number and a slight hood bulge to clear the electronics underneath, the interior had attractive yellow highlights throughout. I could not wait to turn it on and drive it. I quickly signed the papers, grabbed the key, got in and started to roll away.

I was really careful at first, just eased out onto the street, after about 100 feet I floored it….whoa!!!!!! 200+HP and 160+ foot pounds of torque went to the front wheels and I was hanging on…absolutely an amazing silent rush of power, there was no turning back, EVs would now be in my future. BMW did this one right, the aggressive regen and one pedal driving took about 30 seconds to adjust to and then it became instinct. Imagine being in 1st gear all day silently and no vibration, that’s what it’s like.

*Editor's Note: This post also appears on Chris Neff's "My BMW i3" blog.  Check it out by clicking here.

As much fun as the MiniE was it had its faults. The MiniE was truly a conversion, there was no back seat because that was where the 35 kWh battery sat. Pop the hood and there was a golden box with wires here and there, we were warned not to take it through puddles or car washes….so what, this EV was still a blast to drive. I loved surprising supposedly quick cars at the light, sure they could take me past 50 but under that I had the distinct advantage of instant power, no need to downshift and silent take off that confused minds. Nothing felt cooler than stomping the juice pedal at 30mph, breaking the front tires loose and pulling away from the guy behind me in a rush of electrons.

The MiniE was just raw, meaning it rode firmly, the heater was just adequate and the AC was so-so, not a lot of storage and this was not a car for long trips, even if you could find charging stations, it was a bit tiring to drive long ways.

I went to the dealer to get my plates and as I got out this guy ran up to me and said "Is that what I think it is, you actually got one?" He was talking on the cell and continued telling me he and his friends have been talking all about this car and never saw one, then he got back on the phone and said "Man you will never guess what I'm standing next to."

Next up was the BMW ActiveE. This was the 2nd phase of BMWs EV test program and it was a converted 1 series. It took me just one brief test drive to realize this car was far more civilized than the MiniE, this one would drive on the highways comfortably. The ActiveE was down on HP (170) but up on torque (184) and it was also up on weight, a whopping 4,000 pounds, but it was rear wheel drive which made it more sporty. Fortunately the BMW engineers spent more time tweaking this ride and it drove extremely well for its heft, it glided along the roads effortlessly and you could push it hard in turns. It felt like it was carved from a solid piece of metal as it had frame reinforcements throughout. This added to the capabilities of the chassis, it took whatever you could give it.

Charging From a Potato?

With that said it was not as fast as the MiniE but much more refined and it handled like a BMW. The EV also stood out, it had circuit graphics all over it which I really liked. To help clear the battery up front there was an aggressive hood bulge which many 1M drivers asked how I got. The interior was a light grey leather with blue highlights, very tasteful. It also had BMWs iDrive system for gadget fun.

Since the ActiveE was more of a of a drivers EV I took lots of long trips in the ActiveE, having a standard J1772 did not hurt, and its refinement meant I was not fatigued after a long trip. I often did 80 miles or more and sometimes I did that daily for months….in the MiniE I probably would not have been as excited to do that. In fact, in the two years I had the ActiveE I did over 30,000 miles, 80% of that in just over a year until my long commute changed, that is a lot of EV driving and it saved me $1,000s in gasoline costs. The ActiveE actually became the main car for me and my family…my red sports car sat in the garage.

Those graphics on the car made it a real stand-out, unmistakable that this was a special BMW. Often I’d be approached or even followed, police too, so they could get a close look at it. Folks in my town knew me by my car, I showed it wherever I could, it was an amazing experience all around. Unfortunately the party has to end and the ActiveE will be going back.

Driving to a Cars and Croissants, NJ exotic car meet, for the first time with my ActiveE and having 8 to 10 people running behind me before I even got a chance to park and talk to me about the car.

The ActiveE was a great car but there was something even better, worlds ahead, just around the corner, the BMW i3.

Admittedly when I first laid eyes on the i3 I was like…oh no way, how could they make it look like that, it does not scream BMW but econo-hatch. Well over the weeks of seeing pictures and getting an up close and personal look at the car I began to like it more. There are a lot of details, you just need to find them. My last concern were those tires, talk about retro, like 1907 retro, those were some skinny tires, how in the world can this EV even ride on those. I soon got a chance to find out and on a racetrack. Yes a racetrack, BMW asked me if I’d be interested in riding around in the i3 on a racetrack with a professional race car driver…..ummmm let me think about that…OK!!

I won’t go into details of that racetrack day, you can read all about it on my blog www.myactivee.blogspot.com but I will say I was extremely impressed, as was the pro driver, Erin Crocker.

I can tell you the BMW i3 is indeed worlds ahead of the ActiveE and makes the MiniE feel like a soap box. It is fast, it has the same power as the ActiveE but is over 1,000 pounds less in weight. Other than being flung around in the i3 for hours at its limit I also got to drive it. As soon as I pressed the accelerator I could tell this was a finely tuned EV, it just felt right. The power is linear, the regen steps in seamlessly, the steering is connected to you and those brakes are incredible. The i3 rides extremely well and yes, even with those skinny tires, it handles like it’s on rails. The interior is roomier than you would expect and the carbon fiber details are really cool.

The i3 is packed with tech, from its cool features to the carbon fiber shell to the modern interior to its ability to hold the track. I was seriously impressed. Just one thing was missing, no hood bulge.

The EV had evolved into a seriously interesting daily performance driver in less than 5 years.

Visit my new i3 blog at www.mybmwi3.blogspot.com to see my Solar Orange i3......eventually