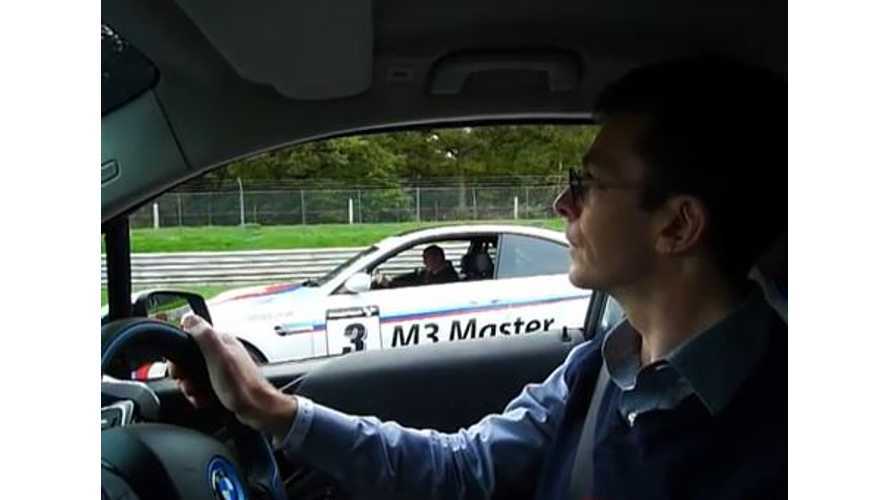 The BMW i3 is no match for the BMW M3 in terms of outright performance or top speed, but when it comes to the 0 to 60 MPH dash, the i3 almost holds its own against the far more powerful M3.

There's no way an i3 will beat an M3 in the 0 to 60 MPH category, but as this video shows, the i3 can at least sort of compete.

Officially, the M3 does the dash in approximately 4.7 seconds.  Whereas the i3 is listed at 7.2 seconds.

Using those figures, we have to assume that either the M3 isn't being fully pushed to the max in this video or that the i3's time is actually much quicker than 7.2 (BMW is notorious for being conservative on its 0 to 60 MPH estimates).  Our guess is that the M3 driver isn't pushing it to the max.

Either way, it's still fun to watch the i3 try to take down the M3 - aka the true "Ultimate Driving Machine."

Here's what Business Car Manager, the uploader of this video, says of the i3 versus M3 event:

THE UK launch of the BMW i3 – call it the German take on the electric car – saw groups of journalists driving out to ex-F1 circuit Brands Hatch in a fleet of brand new i3s.

When we got there, we were unleashed on the track.

In an unexpected twist, BMW lined up professional instructors in a pair of V8-powered M3s, the idea being that we’d drag-race them from a standing start to 60mph, the classic Sweeney traffic-light test.

In the clip here, we opened up the windows of the i3 and filmed out of the driver window.

Apart from the wonderful theatre of the M3 V8, which howls gloriously, you can see that the i3 stays ahead initially because its wall of immediately available torque, delivered with no gear changes and crossed with low kerb weight, makes it a true super-car baiter in the 0-40mph stakes.

The M3, initially bogged down by its higher weight and inertia, settles into its stride and eventually takes the i3, but only in the 50-60mph segment.

The day before, on a sopping wet track, the i3 gripped better and beat the M3 all the way to the chequered flag. One of my colleagues disbelieved the result and asked to drive the M3 for himself, having accused BMW of under-driving the M3.