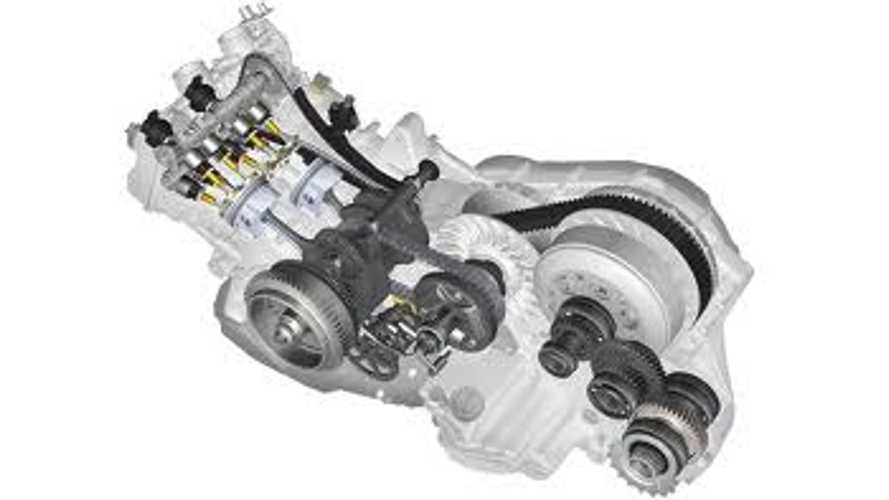 We know that the i3’s range extender is based on BMW’s C 650 scooter engine. This engine, in the scooter version is rated at 65 hp @ 7500 RPM. However, as the range extender, it is de-rated to 35 hp. Presumably when used as a range extender the engine will be running at a lower engine RPM due to NHV considerations.

First reaction would be that a typical transverse mounted 2 cylinder would be too tall. One might think that BMW’s boxer engine would be a better pick for this application (picture an old VW Beetle engine with 2 cylinders removed) as it would fit easily under the rear deck.

Having owned a K1200S motorcycle, I know that BWW likes to lay the cylinder down more than on a typical transverse mounted engine in order to keep the bike’s center of gravity low. In the case of the C 650 we find that the cylinders are laid down a full 70 degrees from vertical.

A quick look at the C650 scooter tells us why the engine is laid down so far: scooters are a step thru design.

One can see from the cutaway of the C 650 engine how radically flat this engine is for a conventional 2 cylinder. Other things to note are the balance shafts.

The engine owes its low position and therefore low centre of gravity to its cylinder bank, which is inclined to the front through 70°.The characteristic sound and low vibration levels are the result of the 90° crank pin offset, 270° ignition spacing, and two balancer shafts driven by spur gears.

An electronic fuel injection system supplies the four valves under the two overhead camshafts. Oil is supplied from a dry sump with double oil pump, and an efficient cooling concept optimises the thermal equilibrium in the 2-cylinder engine.”