Here's How Speed Impacts Range of the Tesla Model S 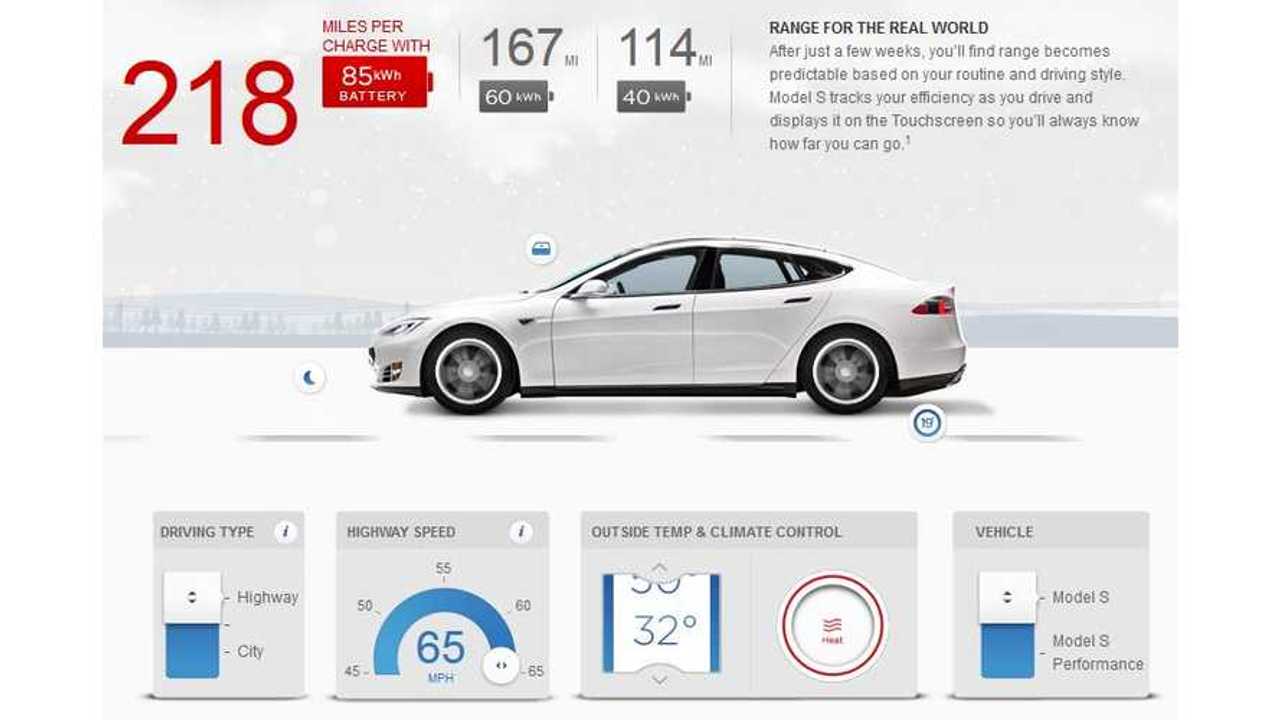 Range Impacted by Speed? Of Course It Is.

Here's Part Two in our ongoing series focused on them nifty interactive graphics posted by Tesla Motors and pertaining to the Model S.  If you missed Part One, may we suggest you click here to discover how much the Model S saves owners in "fuel" costs.   Let's now move on to Part Two.

A common question for potential electric vehicle buyers are concerns pertaining to range.  Some will ask how cold temperatures affect range, while others are more concerned with the impact that speed has on range.  In this post, we'll focus solely on the aspect of speed.

According to Tesla Motors:

"Model S has been engineered to come as close to defying physics as possible: it is the most aerodynamic sedan in its class. That being said, no car—gas or electric—can outrun physics. Because of forces like gravity, friction, and drag, your range will always vary."

Range is never a constant in the real world.  It will, as Tesla says, always vary.  But we can isolate one variable to determine its impact on range, given that all (and we do mean ALL) other variable remain the same.  That's what Tesla's done with this range-versus-speed interactive graphic.  Yes, temperature is included (HVAC settings, too) in Tesla's graphic, but we'll revisit its impact at a later date.

"It takes more energy for any car to travel at 80 MPH than it does at 40 MPH. Drag from the air around the car increases with speed. Model S reduces the effect by coupling best in class aerodynamics with an extremely efficient powertrain. In addition, Model S is engineered to use terrain to its advantage: it is equipped with Regenerative Braking to recapture energy when slowing or heading downhill."

As the chart above depicts, all versions of the Model S lose range as speed passes the 55-mph (actually, the Model S starts to lose range at much lower speeds, but Tesla's baseline range figures are based on the 55 mph) mark.  At a constant speed of 55 mph, range of the 85-kWh version of the Model S equals 300 miles (in lab conditions with all other variables controllable and ideal), but at a constant speed of 75 mph, the chart shows a range of approximately 230 miles, or a loss of 70 miles compared to the rating at 55 mph.  Other versions of the Model S show a similar drop in range as speed increases.

On the flip side, at lower speeds (25 mph to 45 mph) range increases over Tesla's baseline rating.  For example, the 85-kWh version of the Model S is listed at 300 miles (by Tesla and only under ideal conditions) at 55 mph, but at 35 mph, that range rating soars to almost 400 miles.

Here's we've presented just a couple of examples of how speed impacts range.  But you can click here for endless fun with the Tesla's interactive Model S speed versus range numbers.  And feel free to mess with the outside temp and HVAC settings, too.  It's a blast.