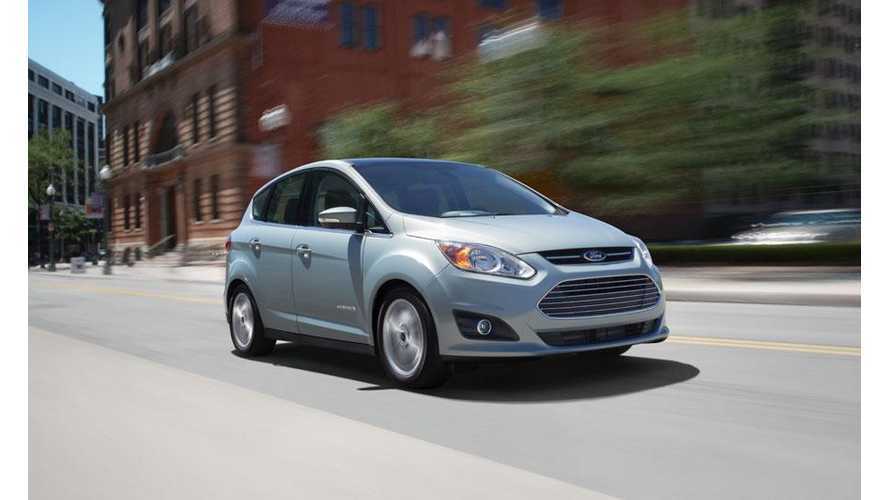 This week I traded in my Chevy Volt for the new Ford C-Max Energi.  I have outlined my reasons for this previously, but it really only comes down to my family's new need for a fifth seat.  To make it very clear, I love the Volt and think it is an awesome car.The C-Max Energi becomes the fourth plug-in vehicle I have owned.  We have a Nissan Leaf and, prior to my two years of driving the Volt, I spent a year driving the Mini-E.

With the perspective I have, I thought it might be useful to present my experience with the C-Max as it compares and contrasts with the Chevy Volt, as the cars, though somewhat different, are relatively comparable.

The C-Max Energi And Hybrid

Beauty is always in the eyes of the beholder, and in this category the two are particularly different.  When trading in the Volt, I could eyeball them both simultaneously.

The Volt has a more low-to-the-ground, sleek-sedan appearance.  The C-Max is a crossover.

The C-Max looks bigger and is definitely taller.  The rear cargo region has a high roofline.  They both seem to have a modern, clean and technical appearance.  The Ford speaks to utility and usability, whereas the Volt speaks to commuting.  Both are unique and stand out from most cars on the road.

In this category, the cars are similar yet distinct.  Both vehicles offer the quick takeoff provided by the instant torque of the electric motor.  Ford seems to titrate that experience based on being in D or L, with L producing a quicker takeoff.  Volt has a similar sports mode, too.  Both cars feel heavier than would be expected of their size, undoubtedly due to the battery packs.  Volt has its weight very low and central, whereas it could be felt shifted somewhat to the rear in the Ford, where the battery is located.

The Volt rides very low to the ground, perhaps a bit too much for my taste.  Though it makes the car road-hugging, there was frequent scraping of the front air dam going up and down steep inclines or speed bumps.  The Ford sits higher and perkier on the road similar to, though less acute, than you would perceive in an SUV.

Braking seemed similar in the two vehicles and quite acceptable, maybe a tad firmer in the Ford.  The Volt could take turns slightly faster due to its lower center of gravity.

The Ford C-Max is more spacious that the Volt and has a taller roof, thus adding to the experience of volume.

The center stack in the C-Max is more conventional, as is the more robust, sturdy and definitive shifter.

Frankly, I always found the Volt interface a little bothersome and never got used to the radio inadvertently going on no matter what button I pressed (fixed in newer models).  Overall, I prefer the Ford interface, though I do miss having the OnStar service at the ready.  The 2011 Volt also included a standard navigation system, which is optional in the Ford (and newer Volts).

The key difference between the two, and the only reason I traded my Volt for the C-Max, is the presence of a three-person bench in the rear.  The Volt can only sit two in the back due to the placement of the battery.

The Ford compromises cargo space however, as the battery juts up into the cargo compartment, reducing the cargo volume by about 20%.

In this category both cars achieve something that non-plugin cars cannot: astounding fuel economy.  The fuel economy is quite different between the two vehicles and is a function of driving pattern.

Fortunately I have a short 6-mile round trip daily commute.  The Ford is EPA rated at 21 miles pure EV range.  So far, I have seen that a fully charged battery displays an expected range of 15 miles.  Mile for mile on my 6 mile commute it runs about 20% better than that.  It is somewhat cold outside and I would imagine range will improve with higher ambient temperatures.

The Volt is clearly superior in pure EV driving range, with the current model getting around close to 40 miles on average.  However, if your daily commute is below 20 miles, figure both will be equal.  In the 20 to 100 mile range, the Volt will be superior.  Beyond that, the Ford may be slightly better.

In non-EV mode, I think both cars are similar - the Ford is EPA rated at 43 mpg whereas the Volt gets 37 mpg.

I have so far taken two longer drives in the C-Max Energi.  First I took a 25 mile round trip, left home with a partially charged battery indicating 12 miles of range, and it managed to deliver 12.4 miles. Driving back mostly at highway speed but keeping it between 55 and 60 mph I got 34.3 mpg.

The Ford has the option of driving purely EV up to 85 mph until the battery depletes, or you can choose to drive in AUTO mode where the car uses the battery and gas alternatively as the on-board computer determines which mode is most efficient.  This is not an option in the Volt.

I tested AUTO mode over a 45-mile round trip with a fully charged battery.  At the end of the trip, the display indicated I had driven 23.8 EV miles and got an overall efficiency of 53.8 mpg.  This was mostly highway driving at 60 to 65 mph.

Of note, both gas engines sound similar and tended to be higher revving and noisier than you would expect at given driving speeds.

The two cars are closely priced, drive similarly, are high tech and fun.  They get tremendous fuel economy.  Overall, the Volt offers more gas-free driving potential, but that depends on your driving behavior.  The Ford offers rear seating for three, better interface, combined gas and battery AUTO mode, and a larger crossover design.

If you have questions you would like me to ask about the differences between the two, put them in the comments below.  I will try to answer them all in a post next week.