Typically, on average, a car depreciates about 39% over its three-year lease term. The Model S and X beat the odds too.

Despite Tesla's reported issues with build quality and the necessity for regular service visits, its cars hold their value at an almost unheard-of level. It does make us wonder why people would be paying a premium for these cars if they are all falling apart. While many Tesla owners have pointed out quality and fit-and-finish issues, the vast majority of its vehicles must be holding up well enough to retain most of their initial value.

Based on a detailed report on iSeeCars.com, the Tesla Model 3 only loses about 10 percent of its value over a three-year lease term. Its example shows an average selling price of a three-year-old Model 3 at $41,734. If you were to buy that car used instead of buying a new Model 3, you'd only save $4,720.

Looking at other EVs, iSeeCars shows BMW i3, Nissan LEAF, and Kia Soul EV three-year depreciation around a whopping 60 percent. For example, you can save about $33,000 by buying a three-year-old BMW i3 over a new one. However, this is not a fair representation of the industry as a whole. According to iSeeCars, EVs depreciate 52 percent on average over three years. The average for all cars over three years is 39 percent. 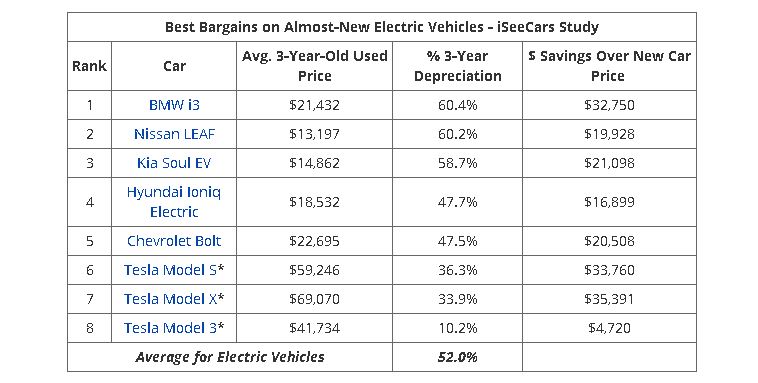 Based on the above information, the Tesla Model 3 can retain its resale value over five times better than all other electric cars and about four times better than all cars in general. Interestingly, the Model S and Model X, while not as impressive as the Model 3, hold their value well too. Over three years, they depreciate at 36 percent and 34 percent on average, respectively. This is fantastic compared to all other EVs, aside from the Model 3. It also beats the industry average and is significantly better than the average depreciation of most luxury vehicles.