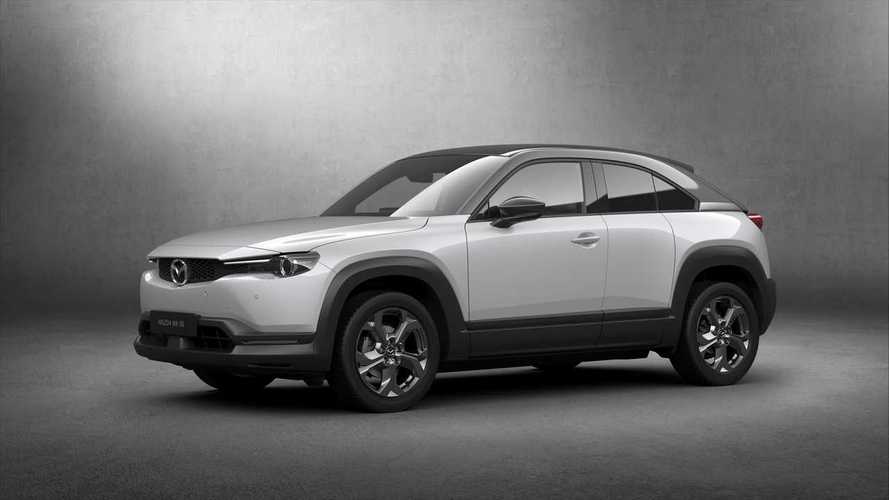 Mazda has finally succumbed to producing an electric car, but it fails on the most important metric and then some.

It has been publicized that Mazda's forthcoming all-electric MX-30 will have a smaller "responsibly-sized" 35.5 kWh battery. The rationale for the battery pack, which is smaller by today's standards, is that it will have an allegedly smaller carbon footprint.

The argument goes that the energy required to mine and refine the needed materials and then build a larger battery pack creates a large carbon footprint, one that may possibly not be offset within the battery packs lifespan. According to Mazda, the MX-30 battery pack is "right-sized." Its smaller pack will bring its carbon footprint in line with its diesel engine cars.

Mazda Explains Why The MX-30 Has A Small Battery

I'm not so sure that I buy the carbon footprint argument. I would have to have the facts laid out with comparisons between the energy required to build an IC powertrain and all its many parts and an EV powertrain. It seems to me that it would be difficult to argue that the energy (and thus carbon footprint) needed to mine steel, aluminum, and other resources, and then smelt the metals into engine blocks, pistons, transmissions and the many other IC components could possibly be less carbon intense than that of building an EV powertrain. I would think this especially true if battery dry-electrode technology is used (no huge drying ovens).

As far as the energy expended (and thus carbon footprint and pollution) from driving an EV vs IC vehicle, I think there is no question that EVs win. Electric motors are far more efficient. It is well known that 60% or more of the potential energy in gasoline (petrol) is wasted when burnt in an IC engine. And, as for their energy sources being green, the electrical grid continues to incorporate more renewable energy all the time. An anecdotal example is the electrical grid in the UK. Several times in the past two years the grid has gone an entire day without using even one pebble of coal. It's been powered by renewable energy. This trend is expected to continue and accelerate.

I do think though that the Mazda engineers have a point, however. Expending so many resources on a large battery pack, which rarely gets fully utilized seems foolish. Most trips top out at about 30 miles and average round trip journeys don't go beyond 60 miles. It does seem a waste to have a very large battery pack. In fact, I think that Mazda doesn't go far enough. If they truly believe the argument that a smaller battery pack equals a smaller carbon footprint then the Mazda MX-30 should have a battery pack that is smaller still. If they subscribe to the notion that most trips are about 30 miles then a 25-kWh pack should be sufficient.

It is believed that the MX-30 may possibly get up to 35 MPX(kWh). (That is 35 miles per 10 kWh.) This is a fairly reasonable assumption. This power efficiency rating is in the range of what other EVs get. So, we can do some math, 35 MPX(kWH) multiplied by 2.5 equals 87.5 miles. Having 87.5 miles of rated range should translate to at least 60 miles of dependably usable-range. That's plenty of range for most daily trips. But what about occasional long-distance trips? Mazda's answer is a Wankel REx. It will be no secret to any of my readers that I think this a great idea.

The only question is how many additional miles will the Wankel REx configuration provide?

I have posed this question directly to Mazda, but as of this writing, and in direct contact with Mazda and holding off my post for a period of time in order to have more details, I have not received a response. Sadly, I must assume that government mandates may push Mazda to give the EV a very limited mileage, but we can hope. If the Wankel REx adds over 300 miles, then I believe Mazda will have a potential winner, especially in maturing EV markets such as Norway and China.  (See Norway: A Case Study In EV Adoption)

Happily, the MX-30 is expected to sell for around $35,000 US. They have not announced if the optional Wankel REx variant will have a similar price point, but we can hope. If pursued, a smaller 25-kWh battery pack could possibly offset the cost of the Wankel REx and keep the price about the same. At this price point, an EV with a total usable range of almost 400 miles should be very popular, particularly in markets where EVs are becoming prevalent.

I will be watching Mazda's EV journey with great interest. I will be especially interested in seeing if the MX-30 REx does well in Norway and China. If it does, I would think that it may be a sign of things to come. I do wish them well. I hope that the are willing and able to sell hundreds of thousands of them.