Perfecting the Wankel. Producing a small roadster when the vehicle type is practically dead. Combining gas and diesel in one engine. Mazda is always coming up with unusual ideas. As it is again now: The MX-30, which will go on sale in September 2020 in some parts of the world, is not an off-the-shelf electric car according to the normal scheme.

We now had the opportunity to drive the Mazda MX-30. Is the group's first pure series-produced electric vehicle innovative or too timid? The first encounter is always exciting. 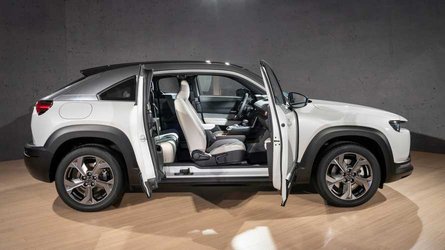 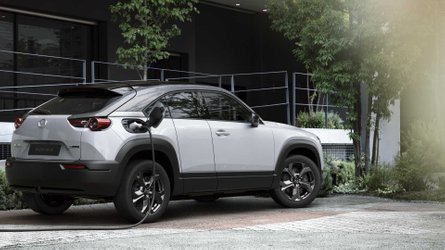 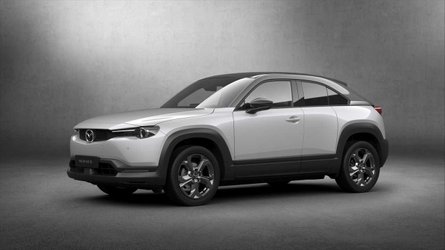 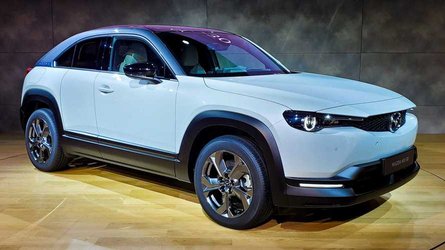 ***Editor's note: This first drive review originally appeared on Motor1 Germany. You can check it out there by clicking here.

It starts with the design: the 4.40-meter long MX-30 mixes a sleek roofline with an SUV look and a distinctive nose. The result is impressive, even without the color-contrasting roof.

The doors are particularly unusual: the rear portals only open when the front doors are open. "Just like the BMW i3!" the e-car expert will shout. Right. But Mazda sympathizers might feel reminded of the RX-8.

Inside, the retro continues: Cork on the free-floating center console refers to the origin of Mazda. The company Toyo Kogyo was founded exactly 100 years ago for the production of artificial cork. All in all, the cockpit shines with great materials and excellent workmanship. Beyond Bentley, Rolls-Royce and Co., Mazda is currently making the most beautiful interiors. The MX-30's only minus point: Its climate touchscreen is difficult to read.

If necessary, one can certainly drive four people in the Mazda MX-30, especially since the trunk is quite spacious with 366 to 1,171 liters. But if you sit in the back, you'll be cramped if you're taller adult. Spacious? Yeah.

How big is the battery?

Let's come to the essential point of the MX-30: its battery. Much has already been written about this, mostly not flattering. 35.5 kWh capacity is far too little, the range as a consequence ridiculous and in general: Why?

Mazda defends the defendant with the following arguments: The battery size is optimal in terms of production, weight and life cycle. Research has shown that EVs with smaller batteries tend to produce lower CO2 emissions over their entire life cycle. In addition, the battery weighs "only" 300 kilograms, so you don't drag a virtual caravan around with you.

The electric motor in the MX-30 delivers 107 kilowatts or 145 hp, plus 271 Newton meters of maximum torque. So a lot of power meets a small battery. Mazda states a maximum range of 262 kilometers in urban areas according to the WLTP cycle, and my test car had 212 kilometers fully loaded.

"But then I can buy a cheaper VW e-Up right away! It's 32.3 kWh and it can do 260 kilometers." That's right. But it is smaller, not a brand new concept and not nearly as well equipped as the MX-30, and the Mazda can be driven very precisely. This is made possible by the G-Vectoring Control, or GVC for short.

And how much power does it draw?

Let's go! My test track is 120 kilometers in total with a lot of motorways. The MX-30 keeps up well there, although 9.7 seconds at 100 km/h is not brutal acceleration. But Mazda likes to leave that to others. On the motorway I swim along without problems, many construction sites slow me down to 80. Talking about brakes: I can adjust the degree of recuperation using rockers on the steering wheel.

Where the track is free and there is no speed limit, I use my full power. At a speed of 140 km/h the MX-30 is regulated and the speedometer shows 147 km/h. Typical Mazda is the sensitive steering, the sometimes harsh rolling behavior is due to the 18 inchers.

Now you and I are sure with this speed-based driving, the car is drained faster than an old Game Boy. But the consumption of the MX-30 is a positive surprise. Mazda gives 17.3 kWh as a factory figure according to the old, optimistic NEDC cycle per 100 kilometers, even 19.0 according to WLTP. I achieved a good 16.1 kWh, values around 15 kWh are also feasible.

But it's not really cheap, is it?

Let's get down to the price: At 33,490 euros the standard equipment is already extensive

However, all the German government has reduced the value-added tax to 16 percent by the end of 2020, making 32,645.71 euros for the basic model of the MX-30. Expensive? All right, a smaller Opel Corsa-e with a little more range is also a good 30,000 euros without a bonus. I don't even want to start with the Honda e.

At the same time, the government is now offering an even bigger environmental bonus for e-cars, namely a whopping 9,480 euros for manufacturers. This leaves 23,654 Euros for the MX-30. On September 25, 2020, the electric Mazda will be on its way to the dealers.

One thing is certain: Cool calculators and rational e-car buyers will not understand the new Mazda MX-30. It is a bold antithesis to the eternal "bigger and further" in batteries. Either you want this car or you don't. Our thesis: The MX-30 will find enough enthusiasts.