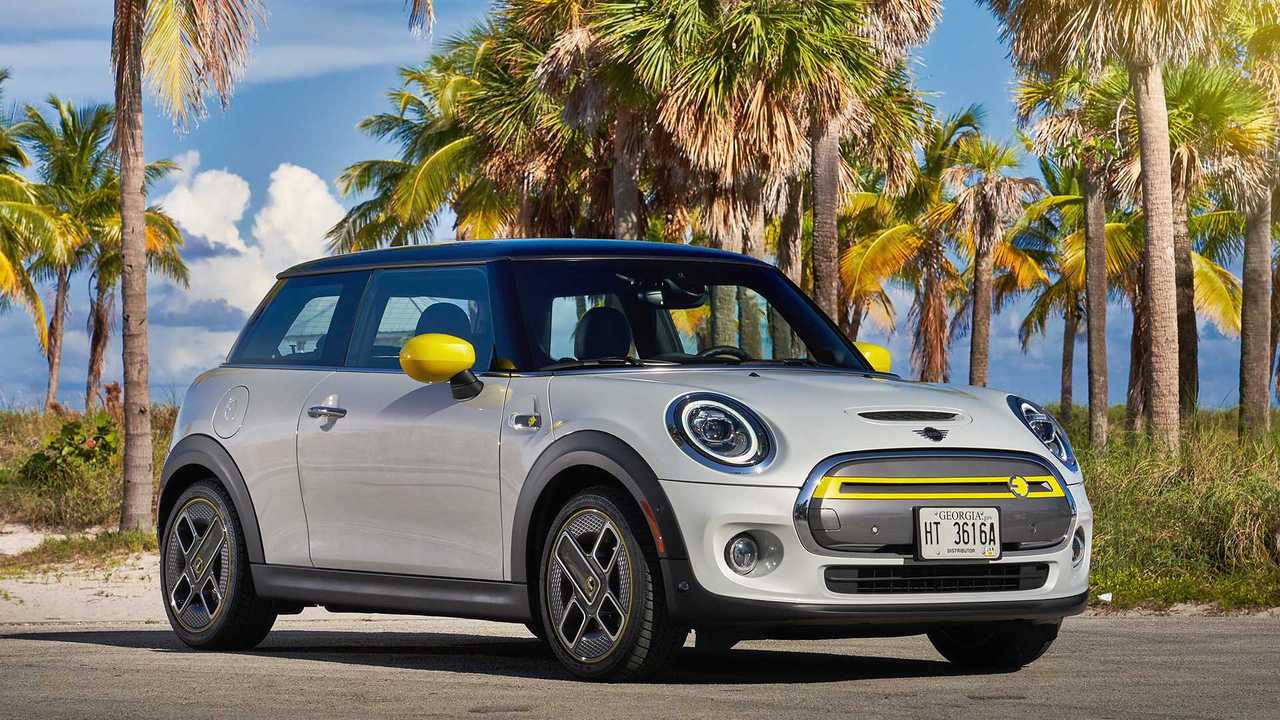 Meet the new boss, same as the old boss.

The 2020 MINI Cooper SE will arrive in US showrooms in a little more than a month and we were on hand last week in Miami when MINI hosted the media first drive event. It was a little extra special for me, as I was one of the original MINI-E drivers ten years ago, and got to drive an electric MINI Cooper for 2.5 years in an e-mobility pilot program run by BMW.

However, that electric MINI was a crude vehicle, quickly assembled from 3rd party, off-the-shelf parts. The entire back seating area was taken up by the 35 kWh battery, so it was a 2-seater. The car had no thermal management system, just a couple fans to blow cabin air on the pack when it got too hot. Still, I really enjoyed driving that car, and it will always be special for me because it was my first electric car. So how much has changed in 10 years? Well, surprisingly, not all that much.

When you consider that Tesla was rolling our their proof-of-concept Roadster when the MINI-E was in production and see where they are now, it's hard not to look at the new MINI electric and wonder "That's what we've been waiting 10 years for?"

Not that the 2020 MINI Cooper SE isn't an extremely cute and fun EV, because it is. I thoroughly enjoyed my time driving it, and I'm actually thinking about leasing one now that the lease on my 2018 BMW i3s has ended.

However, in the 10 years since the MINI-E came out, the EV market has improved dramatically and the electric MINI has mostly stood still. Yes, it has a sophisticated thermal management system and heat pump, it goes further per charge with a smaller battery and is more than a second faster from 0-60 mph. It also can accept 50 kW on a DC fast charger whereas the original MINI-E was not DC fast charge capable and oh yeah, it actually has back seats.

But the 2020 Cooper SE is also a converted gas car, not a purpose-built EV, just like the MINI-E was and that comes with sacrifices. MINI needed to find a place for all the batteries, so they created a T-shaped pack, stuffing the modules in the tunnel down the center of the car and under the rear seats. They could only fit 32.6 kWh in there, so the vehicle has basically the same range as the MINI-E did in 2009.

In fact, the Cooper SE will have the shortest range of any BEV available in the US in 2020, and by quite a long margin. The 40 kWh Nissan LEAF has an EPA range rating of 150 miles per charge, and that will be next up on the range chart after the MINI Cooper SE, now that the Honda Clarity BEV has been dropped and the Hyundai Ioniq is getting a larger battery for 2020.

The Cooper SE's powertrain is borrowed from the BMW i3s and provides plenty of punch. It has 181 hp and 199 lb-ft of torque. That's good enough to propel the car from 0 to 60 in slightly under 7 seconds. It actually feels faster than that and I would have guessed it was in the low 6's if I didn't already see the spec sheet. Handling should be on par or even slightly better than other MINI's, as we were told the center of gravity on the Cooper SE is lower than any other MINI because of the battery placement. We didn't get the opportunity to really test that out, as our 70-mile test drive was compressed into only a couple of hours and the route wouldn't allow for that kind of spirited driving.

Even with the rear seats up, the MINI Cooper SE holds two suitcases in the rear

However, the car felt planted and the steering crisp. Hopefully, I'll get a loner to drive for a couple of days in the future to experience a proper road test. As with most sporty front-wheel-drive cars, there was definitely some torque steer when you punch the accelerator, but it wasn't too noticeable.

The Cooper SE really shines in the 0-40mph game, but once you get over 50mph the power fades considerably, more so than it seemed my BMW i3s did, and that's surprising because as mentioned, they share the same motor. Top speed is electronically limited to 93 miles per hour, two miles per hour less than the 95 mph limit on the 2009 MINI-E and 6 mph less than the BMW i3s, which has a top speed of 99 mph.

The Cooper SE can charge at 7.4 kW on a level 2 charger. The car comes with a Webasto Turbocord, which can charge from a 120v or 240v supply. When charging from a 240v outlet, it can deliver 3.8 kW. This will probably be good enough for many MINI Cooper SE owners since the battery isn't too large.

The 32.6 kWh battery has a usable capacity of 28.9 kWh, so the Turbocord will recharge the battery from empty in about 8 hours, which should be fine for overnight charging. When charging from a Level 2 EVSE that can deliver the full 7.4 kW, the Cooper SE will fully charge in under 3.5 hours. On the road, the Cooper SE uses the combined charging system, or combo plug, and can accept up to 50 kW, just like the BMW i3. This will recharge the car to 80% in 35 minutes.

The EPA rated range is 110 miles and that seemed about right after driving it for the afternoon. The car showed 115 miles of estimated range as it was fully charged when we started out. After driving the 70-mile round trip we ended with 50% state of charge. The thing to consider is the driving conditions were nearly perfect for range. On the first half of the trip, we were in slow-moving traffic and rarely got over 40mph.

On the return, we were on the highway, but there was a good amount of cars sharing the road and we were driving 60 mph to 65 mph most of the time. All of the driving was in warm Miami temperatures, but not too warm that we would need the air conditioning. Basically perfect range conditions, something that I'm sure didn't happen by accident.

So while we may have observed an estimated range of 140 miles, that probably won't be what most owners see, unless they live in warm areas like Southern Florida or Southern California. However, if you do live in a mild-climate area, I'd bet it wouldn't be too hard to get 150 miles of range per charge if you didn't goose the throttle too much.

What is worth mentioning is the base level, Signature is loaded with items that are optional on the gas MINIs. The vehicle is well-appointed and costs $29,900, all you do is select the color. This is where the MINI Cooper SE begins to make sense. With a base price of $29,900, the Cooper SE can be had for under $20,000 in some states. That's because MINI (which is part of the BMW group) still qualifies for the full $7,500 federal tax credit. You then add on State rebates available in California, Massachusetts, Colorado, Connecticut, Delaware, Louisiana, Maine, Maryland, New York, Oregan, and New Jersey and the Cooper SE basically becomes a $20,000 car.

I can see lease rates to be under $150/month with very little down in some states, and that's going to make a lot of people take a look at the Cooper SE.

Just like the BMW i3s, there are four driving modes. However, instead of Sport, Comfort, Eco Pro, and Eco Pro Plus, the MINI Cooper has Sport, Mid, Green and Green Plus. The car defaults to Mid upon startup, just as the i3 defaults to Comfort. Sport mode was decidedly more responsive, but I really couldn't tell too much a difference in Green and Green Plus, other than they were both noticeably less responsive than Sport and Mid.

I drove the 70-mile media drive route mostly in Mid and Sport mode and finished the day with 45 miles of estimated range remaining.

The car always defaults to high regenerative braking upon startup, but the driver can select low regen with a dedicated switch on the center console. In high regenerative braking mode, one-pedal driving is possible and the car behaves similarly to a BMW i3 with relatively strong lift-off regen. The car will come to a complete stop and hold without using the friction brakes. In low recuperation mode, the car will nearly freewheel coast, and it's meant to feel like a gas MINI.

Was It Worth The Wait?

I like the new MINI Cooper SE, and as mentioned above I may very well lease one now that my BMW i3s lease has expired. It's a fun car to drive, easy for city driving and parking, and I have a Tesla Model 3 for any long road trips. The range of my 2018 i3s was pretty much identical to the Cooper SE, and I was just fine with it. Many people, in fact, will be fine with a 110-mile EV, especially since it can DC fast charge at 50 kW and recharge to 80% in about a half an hour.

Not every EV has to have 300 miles, but the Cooper SE would benefit from a slightly bigger battery in my opinion. If you live in one of the Northern states, I would expect to be able to count on only about 80-90 miles of range in the winter months, and that could be an issue for some. If MINI could have managed to squeeze 5 more kWh in there somewhere, the car would have been capable of 100 miles in pretty much any weather conditions, making it more versatile.

I can't help but think this wasn't MINI's best effort. Retrofitting an existing platform that was engineered for an ICE drivetrain is so 2015. I'd love to see a ground-up EV from MINI utilizing a skateboard platform. It would be lighter, more agile and have even more interior room as the cab could be positioned even further forward as it is in the i3. MINI could have brought this vehicle to market years ago, but they didn't and that's disappointing. It just isn't that much advanced from the MINI-E that I drove from 2009 to 2012.

That said, it's a good car that's fun to drive, looks cool, and is offered at a great price. Yeah, 110 miles of range isn't great but it's more than enough for a lot of people. Especially those that want to drive electric, but need to do so for under $200/month.