What We’ve Learned After 2 Years Of Chevy Bolt Recall

Over half of 2017 to 2021 Bolts have recorded a battery replacement.

I think about EV battery health and range every day. That means large battery recalls, like the one that GM announced 2 years ago this week for the Chevrolet Bolt, are particularly interesting to me and my fellow battery nerds. Battery replacements, in general, raise an important question for electric cars: Is the odometer a good indicator of vehicle value? A Bolt with 50,000 miles and a replacement battery is as good, if not better, than new.

My team of battery scientists has closely followed and reported on the Bolt recall since it was first announced in November 2020. Each day over 1,600 Bolt owners monitor their EVs with Recurrent and this data gives us insight into how their batteries perform before and after replacement.

The origins of the Bolt battery recall

In November 2020, after a handful of seemingly unrelated fires, Chevrolet issued the first Bolt recall for 2017 to 2019 Bolt model years. The company instructed owners to limit charging capacity to around 90% and to bring the cars to a dealer for diagnostics and possible battery module replacement. Following driver data, we saw that 16% of owners stopped charging to 100% in response to the safety guidance.

In July 2021, after an unsuccessful software fix from GM, NHTSA issued a consumer alert, and Bolt owners were asked to park outside until further notice. A few weeks later, GM announced that they had found the issue – a coincidence of two battery faults – and that dealers would replace modules on all 2017 to 2019 Bolts. In September, the recall was widened to 2020 to 2022 model years, with complete battery pack replacement for 2017 to 2019 models and as-needed module replacement for later years.

Where do we stand now?

By mid-2022, Chevrolet and the National Highway Traffic Safety Administration (NHTSA) reported that well over half of 2017 to 2019 model year batteries had been replaced but had made less progress on newer models.

Using anonymized data from our community of nearly 1,684 Chevrolet Bolt EVs, we found that 58% of 2017 to 2021 Bolts have already recorded a battery replacement. This includes a large majority of 2017 to 2019 Bolts. Newer models, which are presumed to be less at risk of malfunction, are lagging.

Here’s a look at the number of Bolts by model year that have had a replacement in the Recurrent community.

Chevrolet has prioritized early model years since the beginning of the recall. While this shows that the company has made an incredible amount of progress in two short years, this recall is far from over.

Note that while the recall did cover 2022 Bolts and Bolt EUVs, there was a mid-year cutoff for at-risk vehicles. While Recurrent tracks battery replacements in all vehicles, we do not know how many 2022 Bolts in our community require one.

Bolt owners had to go through a lot over the past two years, including reduced range and a lot of anxiety. However, after replacement, older models are erasing years of range degradation due to age. The replacement packs for 2017 to 2019 models are also 6 kWh (or 10%) higher capacity than their originals. That translates into increased range -- and a courtesy restart on their battery warranty.

Using data from 1,684 Bolts on our platform, we charted how the range has increased as more batteries are replaced. The chart below shows the estimated range at full charge for Bolts before (blue) and after (yellow) the high-voltage (HV) battery was replaced in 2021 and 2022. You can see that as time progresses and more batteries are replaced, the thick yellow line (moving average of range) pulls away from and above the blue. 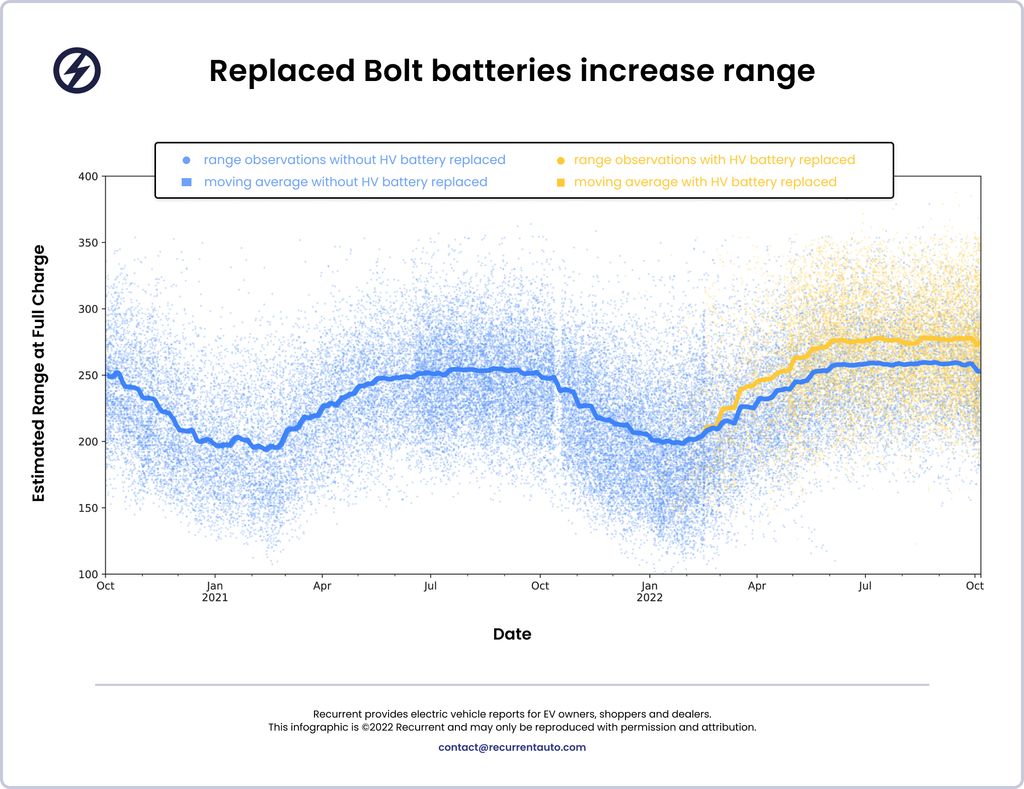 The chart above includes some seasonal fluctuations around the winter months when cold weather reduces some range estimates, and temperature swings affect the Bolt, too. The chart below simply compares before (blue) and after (yellow) the battery replacement at one point in time this fall. 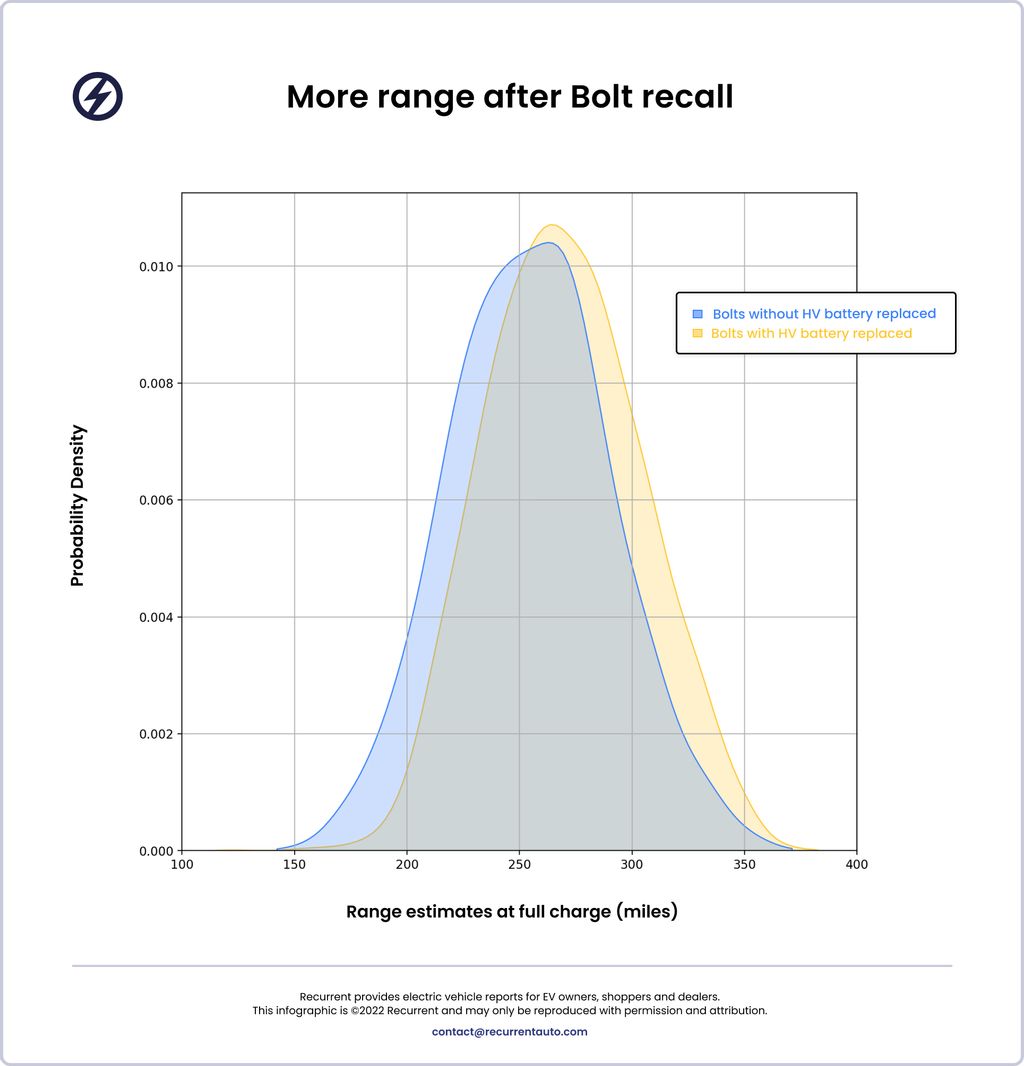 Lessons to take away from the Bolt recall

2. Bolt owners who stuck with Chevy were rewarded with a new, often bigger battery, and a renewed warranty.

3. GM’s strategy of prioritizing older, more vulnerable battery packs for replacement seems to have worked with +80% of the 2017 to 2019 models back on the road with a new battery.

4. Lots of factors are contributing to surging Bolt sales this year, but GM’s swift response seems to be helping this leading EV model get past battery fears. At a great deal of cost, they handled it right.

⠀ The Chevy Bolt EV Battery Recall Bonus That Nobody's Talking About
Keeping The Chevrolet Bolt EV/EUV Recall In Perspective
++
Comment!
Got a tip for us? Email: tips@insideevs.com