It's faster than the fastest Tesla and basically matched the internal combustion engine cars.

Here is a very special episode of Bjørn Nyland's 1,000 km challenge, in which the NIO ES8 7-seat electric SUV has been tested using battery swap stations, instead of fast charging.

There are two battery swap stations in Norway right now - the first one, installed at Kjellstad in Lier in January, and the second one, installed this month in Svarthagsveien 1,1540 Vestby.

Bjørn Nyland was using just the first station to give us glimpses of what to expect when the battery swap infrastructure is widely available along highways. NIO already installed more than 1,000 of such stations in China, and soon intends to start production of them in Hungary to support the expansion in Europe.

Previously, the NIO ES8 with a 100 kWh battery pack was able to achieve a time of 11 hours and 25 minutes, which is not the best - mostly due to relatively high energy consumption and limited charging rates. Not only that, the car had to stop five times for charging.

However, with the use of battery swapping, things are different and NIO ES8 is much faster - by almost 2 and a half hours.

That's the best EV time ever registered, noticeably shorter than in the case of the top Tesla models and especially other big electric SUVs. The overall result is the same as the reference car (Kia Ceed PHEV).

Not only that, the NIO ES8 requires just three battery swaps along the way (on average, every 234 km (145 miles) excluding the initial segment), which is a better number than the typical 4-6 charging stops in the case of other EVs.

The 1,000 km challenge is a unique test (optimized for time rather than convenience), which expands our empirical knowledge about EVs and gives us glimpses of what is physically possible by an experienced driver in a country with dense DC fast charging/battery swap infrastructure.

The battery swapping is basically a semi-automatic operation after parking in front of a station, although the driver is required to stay inside and make a few confirmations during the process. Bjørn Nyland estimates that it takes about 7 minutes total (including initial parking), rather than 5 minutes as advertised.

The energy consumption during the challenge amounted to 280 Wh/km (451 Wh/mile).

Overall, battery swapping appears to be a good solution, because an electric car can potentially travel long-distance as fast as any conventional model.

However, the infrastructure is not yet widely available (especially at scale), compatible only with NIO models and is supposedly expensive. It means that we are not so sure whether it's better than fast charging.

Fast charging still has big potential for improvements, including higher peak power and higher average power. It should gradually move the time towards the 9-hour mark, thus reducing the difference. 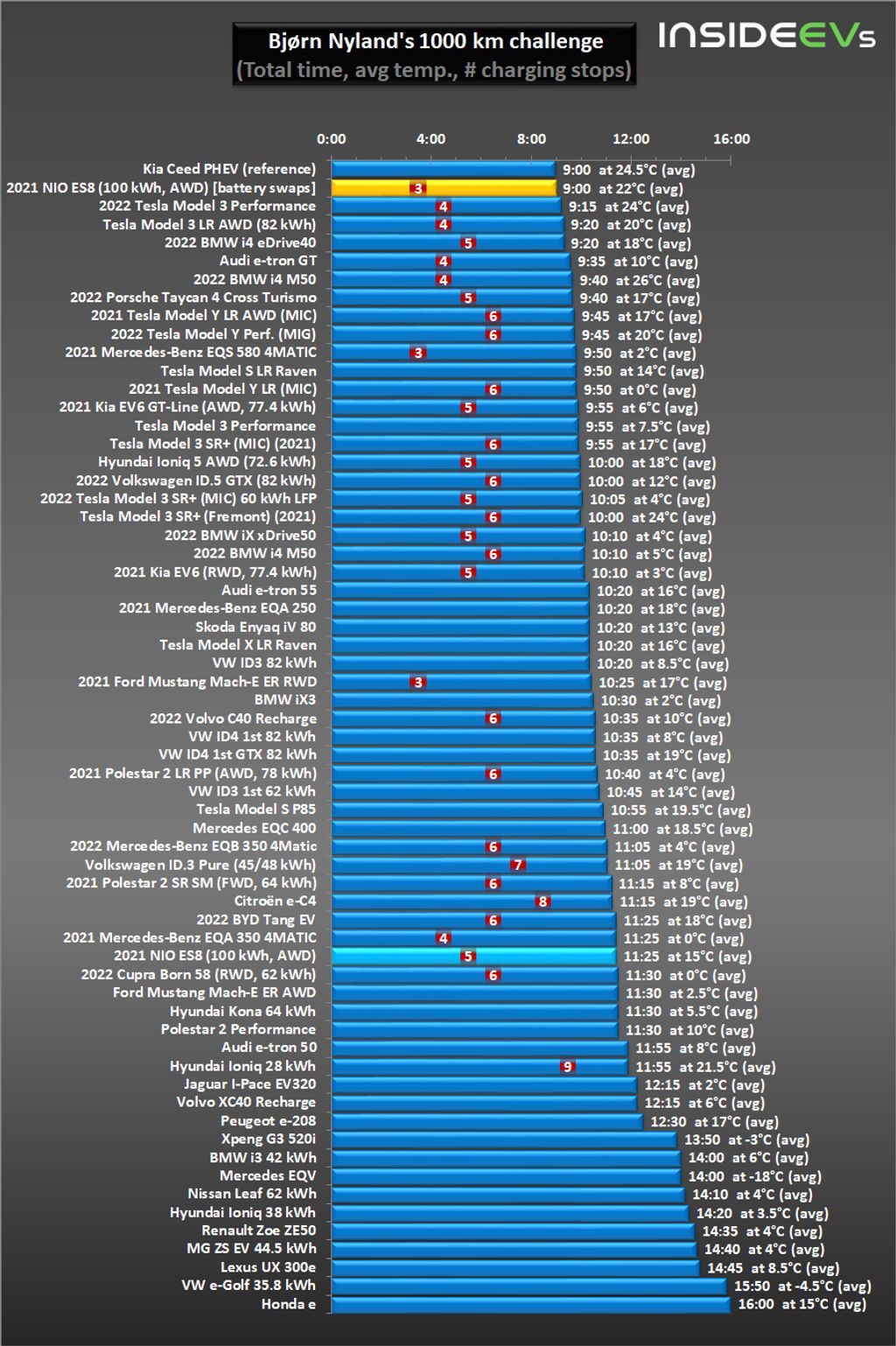