It also notes that it does not foreshadow mass EV adoption across the market yet.

Electric cars are gaining popularity around the world thanks to people wanting to be early adopters, government incentives and to an increasing extent climbing fuel prices. It’s already cheaper to run an EV than an ICE vehicle in many places around the world and people are clearly more interested in EVs now than they have ever been, although we are still quite far from the tipping point when EVs will rival ICE popularity among new car sales.

Cars.com quantifies this by announcing that in March, it observed a 173 percent increase in the number of searches for electric vehicles in the United States. They looked at February 24, the start of the Russia-Ukraine conflict, through March 25 and compared it to the same time last year.

The states where the highest numbers were recorded from are, incidentally, the ones where EV adoption is already the most advanced - California (16.3 percent of searches), Florida (7.4 percent) and Texas (7.1 percent). At the other end of the tables, we have the two Dakotas, Alaska, Idaho, Montana and Wyoming, each of which only accounted for 0.1 percent of searches. 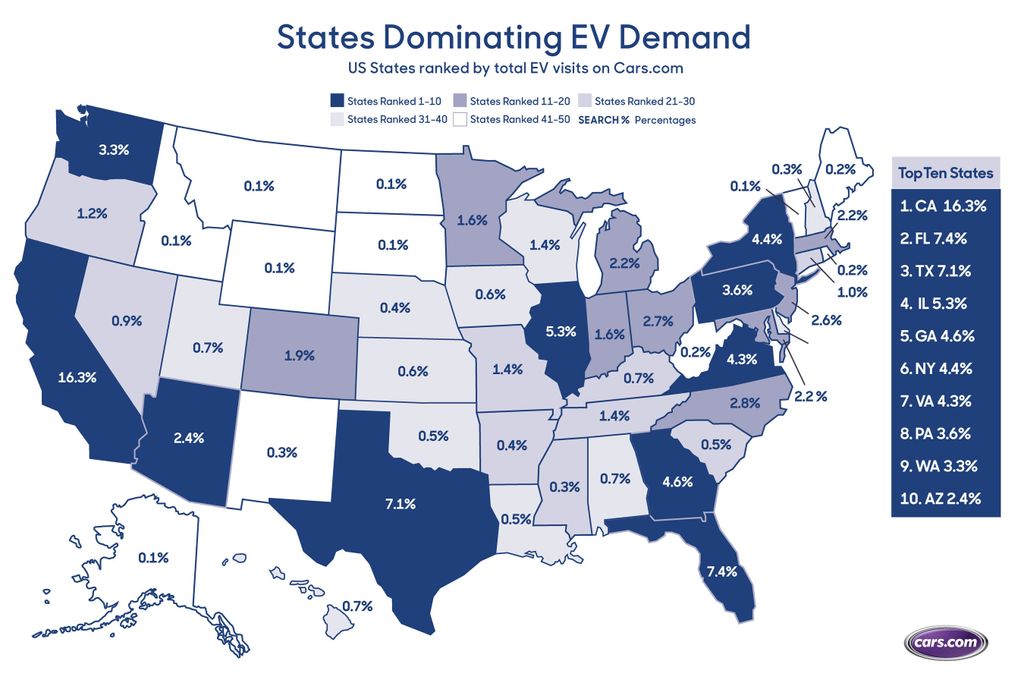 According to Jenni Newman, editor-in-chief for Cars.com,

Recent macro events including historic inflation, rapidly rising gas prices, and debate over oil production and supply have transformed consumers' mere curiosity about EVs to an unprecedented level of interest.

Automakers need to ramp up production, but until the supply-chain shortages level out, the extreme lack of available EVs can't keep up with the growing demand in the current market. There is hope, with almost 50 new EV models planned by 2025, car shoppers will have more styles and inventory to choose from — eventually.

However, in spite of this increased from buyers, Cars.com notes that its data suggests only around 55 percent of Americans who don’t currently own an EV would consider one as their next purchase. It found that 52 percent of Americans see cost as the main hurdle for adoption, while 70 percent don’t currently have a 240V electrical connection and 65 percent don’t plan on upgrading in the near future.

Jenni Newman goes on to explain that

Although we're seeing EV interest on Cars.com at historic levels, today's consumer momentum may not translate into action tomorrow. If gas prices stabilize, the public is likely to get complacent about making a change, a path they may regret during the next market swing.

Even if gas prices remain at record highs, factors such as cost, availability, infrastructure, education and awareness still present barriers to widespread adoption.

More on EV vs ICE