This single plant supplies EV batteries for most of the plug-in car brands in Europe.

LG Chem's LG Energy Solution (LGES) has recently released an interesting PR video about its lithium-ion battery cell factory in Poland, which gives us a rare insight into this large gigafactory.

The site, located in Wrocław in western Poland, is actually the largest EV battery plant in Europe and one of the largest in the world.

The company does not say what is the current output, but in the European Investment Bank (EIB)'s info from 2020 it was said that the initial manufacturing capacity of 35 GWh/year will be expanded to 65 GWh/year.

That's a massive volume and probably the biggest LGES battery factory so far. It's believed that this single site is able to provide a sufficient amount of batteries for several hundred thousand electric vehicles annually.

As we can see in the video, there are a lot of advanced and highly automated production processes. The South Korean company notes also that the plant is powered by 100% carbon neutral electricity.

The video includes also a map of where the batteries are exported. As we can see, LGES batteries are used by a pretty high number of manufacturers, including Audi, BMW, Daimler, Jaguar, Porsche, Renault, Stellantis, Volkswagen and Volvo: 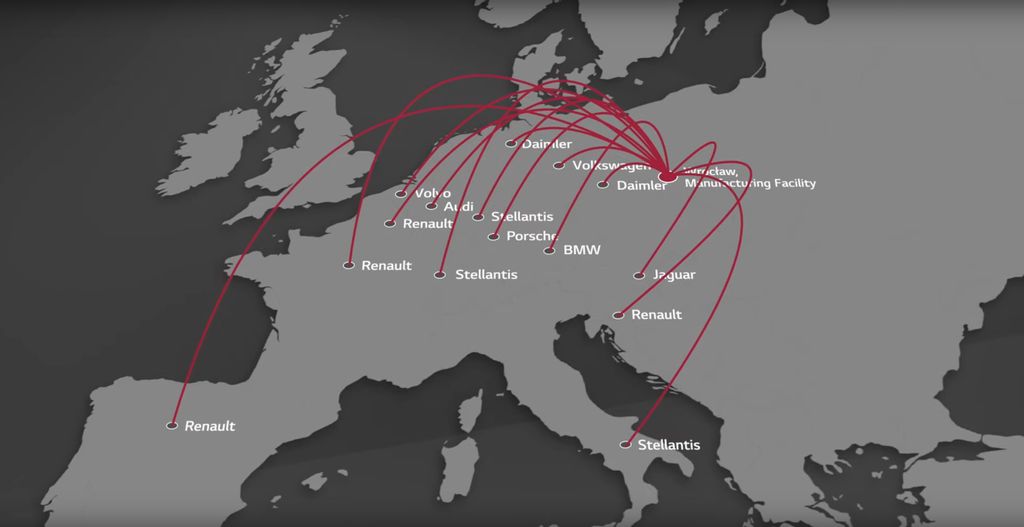 The list of customers actually might be higher than shown on the map, depending on when it was updated.

According to the recent press release, Poland has attracted the investment, supporting it with €95 million ($104 million) aid, which according to the European Commission, was confirmed as necessary.

"Therefore, without the €95 million Polish support, LG Chem would have opted to invest outside of the European Economic Area."

Other European countries also are trying to attract gigafactory investments. One of the most successful over the past several years was Hungary, which was selected by SK Innovation's SK On and Samsung SDI.

Currently there are double-digit number of battery gigafactories under construction/planned in Europe, compared to basically none a decade ago.