Elon Musk did not say what the upgrades are and when they will become available, though.

Tesla owners who bought the Full Self-Driving package for their EVs equipped with Autopilot 2.0 hardware will need a camera upgrade before they get access to FSD Beta.

The bad news came from Elon Musk himself in a Twitter reply to a question on whether 2016 and 2017 Teslas with FSD will get FSD Beta. He confirmed that owners of those model will need “camera upgrades,” which likely means replacing one, several, or all cameras.

“Yeah, although early production cars will need camera upgrades, as well as FSD computer (all included in the price).”

The executive did not provide details on when the upgrade will become available and if it’s for all eight cameras that are part of the Autopilot 2.0 sensor suite. It’s not even clear why these cameras need to be replaced in the first place.

White-hat hacker @greentheonly offered a clue in the same Twitter thread, claiming that the only difference between the older cameras and the newer ones is the RCC camera filter.

The only certain thing is this upgrade will delay some Tesla owners’ access to the Full Self-Driving Beta package even further, despite the fact that most of them have paid for it years ago.

When the Autopilot 2.0 suite of sensors was introduced in 2016, Tesla said all of its cars have the necessary hardware to achieve full self-driving capability via future software upgrades. That promise helped Tesla sell vehicles but turned out to be inaccurate.

The EV maker updated its Autopilot hardware several times, including with a new computer included as a retrofit for Autopilot 2.0 owners who bought the Full Self-Driving package.

Unfortunately, no Autopilot 2.0 owners with the new FSD computer reported getting access to FSD Beta—not even those who achieved a 100/100 safety score in the app.

This has obviously sparked rumors that Tesla would eventually need to upgrade more than the computer to achieve self-driving capability.

How Many Cameras Does Tesla Autopilot 2.0 Currently Use? 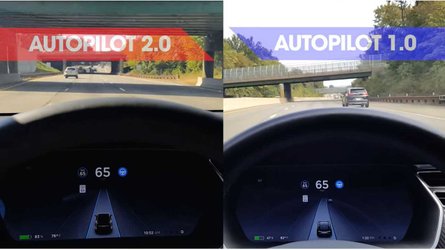