Was Tesla Disrupted By Traditional Carmakers Selling EVs In Europe?

This is what a Schmidt Automotive Research graphic suggests.

Tesla disrupted the automotive world by showing electric cars could be high-performance, desirable machines. Elon Musk even said his main goal was to make other car companies follow Tesla’s path before becoming the most valuable car company in the world. We have no idea if Musk still has the same motto, but European EV sales numbers show his wish was granted. More than that, it reveals the disruptor might have been disrupted.

It was with this question that Matthias Schmidt, from Schmidt Automotive Research, shared the graphic above in a tweet.

As you can see, Tesla started dominating the EV market in Europe by October 2019. Until that point, the highest EV volumes came from Renault, Nissan, and Mitsubishi, the three companies that Carlos Ghosn tried to stick together with an alliance that almost became a merger.

From that point on, Tesla sales in the Old Continent rose to reach a peak in December 2019 and January 2020, when sales plateaued until March 2020, when the COVID-19 pandemic started to hit Europe. Sales then began to decline.

Between August and September, Tesla was surpassed by the alliance and also by the Volkswagen Group. The VW ID.3 was introduced at the beginning of September, and sales kept rising for the German automaker and Renault, Nissan, and Mitsubishi.

In the graphic, we can see that one reason for the push from traditional automakers to sell EVs came from the requirement to reach 95 g of CO2 per kilometer. As we mentioned in a previous article, the Volkswagen Group started selling the ID.3 before its software was fully developed to try to avoid a fine. Although it sold a lot of EVs, the effort was not enough to avoid the penalty.

You can see that the graphic shows data of 18 European markets (the ones prior to the 2004 EU enlargement), Norway, Iceland, Switzerland, and, in case you were in doubt due to Brexit, the UK as well. We asked Schmidt the reason for that. 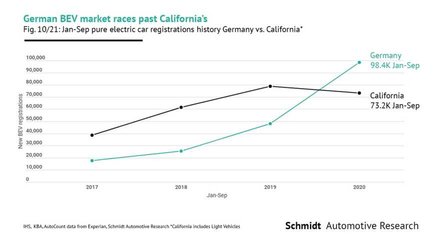 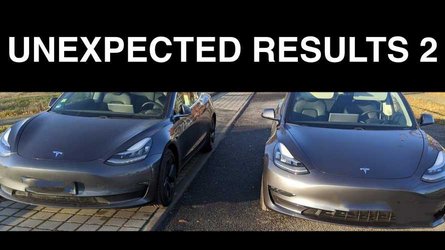 We also asked the author of the graphic what he believes to have been the reason for Tesla sales to have decreased when those of legacy automakers selling EVs rose. A Tesla supporter claimed it was due to supply issues, but other commenters said the company would not reduce prices if it could sell the same car elsewhere for more money.

If the disrupter was disrupted in Europe, it could be something related to the COVID-19 pandemic or limited to 2020. Would the same happen with Giga Berlin delivering cars? Wouldn't Tesla need an ID.3-sized EV – something smaller than the Model Y – to succeed in Europe?

All traditional automakers that sold more EVs than Tesla have European plants for these cars. At this point, all we can do is debate about the reasons and guess about what will happen after Tesla begins to produce cars in Germany. Make your bets.