The bad news is that, on average, they still cost $137/kWh, according to BloombergNEF.

We're close to the end of 2020, and none of us will miss it. The COVID-19 pandemic is still around, and there are few reasons to celebrate, but we should cherish the ones we have and try to forget the rest. When it comes to EVs, 2020 did not only show us what a world without oil is. It was also the first year with a battery pack for less than $100/kWh, according to BloombergNEF. Sadly, it was limited to some e-buses in China.

On average, battery packs now cost $137/kWh, still according to the research company. Regardless, achieving the magic number for production cost parity with ICE vehicles is representative of how electric mobility and EV adoption are progressing faster than many legacy automakers would like to admit – especially the ones still trying to make them look as dirty as combustion-engined cars.

BloombergNEF has some other good news to share. If battery packs follow “a volume-weighted average basis,” their current price is even lower: $126/kWh. It also said the $100/kWh average would probably arrive by 2023, as Ray Wills said in September 2019. Some people believe that will be the point in which BEVs will reach a production cost parity with ICE cars.

These numbers are on BNEF’s 2020 Battery Price Survey. According to James Frith, lead author of the report and the company’s head of energy storage research, the $100/kWh battery price was possible because of the larger demand for electric cars, which drove an increase in battery pack orders. New designs and better chemistries also have an important role in achieving production cost parity with combustion-engined vehicles. 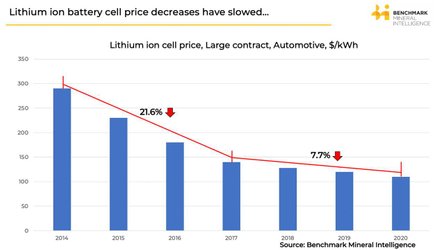 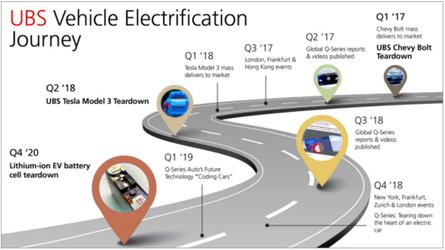 EVs May Reach Production Cost Parity With ICE Cars By 2024

Frith also addressed a concern that Benchmark Mineral Intelligence expressed when it disclosed that the pace at which battery prices are falling has been slowing down. According to him, “even if prices for raw materials were to return to the highs seen in 2018,” the price reduction would not come to a halt because the industry has become “increasingly resilient to changing raw material prices.”

In other words, prices may take more time to drop, but they will. As they have for some e-buses in China. The next stop in this story may come sooner than expected.