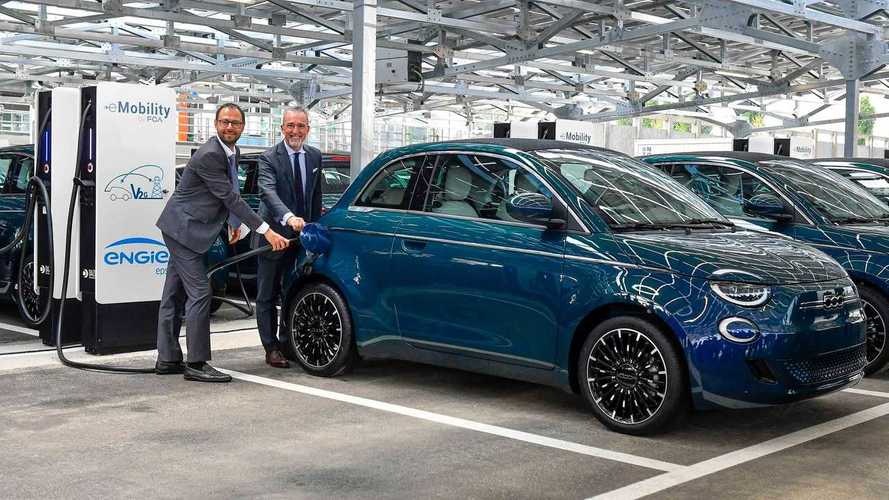 This week Fiat Chrysler Automobiles (FCA) launched the first phase of its Vehicle-to-Grid (V2G) pilot project at the Mirafiori plant in Italy, announced in 2019, which soon should become the world's largest V2G installation.

Initially, it has 32 dual bidirectional chargers, for 64 cars, but by the end of 2021, it will be able to handle up to 700 electric vehicles. Additionally, there will be also a solar installation with 12,000 panels, which should provide 6.5 MWh of electricity a year.

FCA is conducting the project in partnership with the ENGIE Eps as the technology partner and Terna Group (electricity grid operator).

The main goal is to test in real-world conditions whether EVs can really play a significant role in the stabilization of the electric grid.

An interesting thing is that FCA intends to use brand-new electric cars (in this case, the all-new electric Fiat 500), which are waiting for delivery to the sales network.

"...has enabled the transformation of what is typically only a cost (the storage of vehicles waiting to be delivered to the sales network) into a benefit that could be exploited by vehicle fleet managers in the not-too-distant future. Indeed, a (potentially high) number of vehicles parked for long periods in one place represents an opportunity to provide services to the network in an ‘aggregated’ manner."

"V2G technology enables vehicles to exchange energy with the power grid, making them a valuable resource for the national power grid operated by Terna, to contribute to the establishment of a more sustainable electrical system and to represent an opportunity to optimize the operating costs of the cars for the benefit of motorists, as well as a concrete possibility of contributing to a more sustainable electricity system.

Bidirectional technology – which both charges the car and returns power to the grid – can only work efficiently when the car and the charging infrastructure speak a common language. This is the focus of the trial launched with the inauguration of the plant."