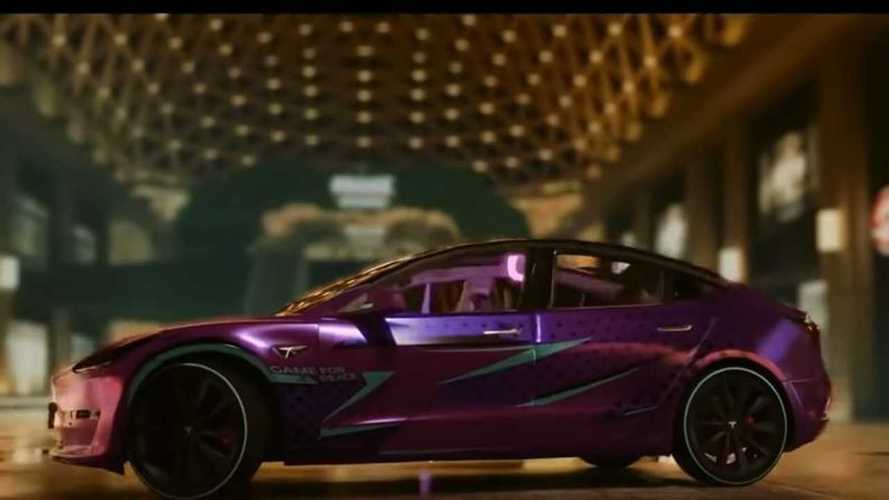 This wild Tesla Model 3 skin is a maxed-out version of the game vehicle.

Here's The Story Behind The Massive Package Airdropped At Tesla Shanghai

Tesla China delivered a big surprise box at the HKRI Taikoo Hui Shopping Mall in Shanghai. When opened, a one-of-a-kind Tesla was unveiled showcasing a version of the Model 3 featured in Game For Peace (Chinese version of PUBG) —  a mobile multiplayer battle royale game developed and published by PUBG Corporation.

So what did this tricked-out Tesla look like? Check out the 'Awesome Purple' color and turquoise vinyl accents as featured in the video game.

The first photos of this car were shared by our friend Jay who reports on Tesla news from Shanghai, China.

This skin of the Tesla Model 3 in Game For Peace is the maxed-out version of the vehicle. The player has to start with a basic Model 3 or a Model X in a solid color. As the level raises in the game, new skins and upgrades become available (known as ‘Tesla Crates’, demo video below).

Reportedly, these skins are developed in collaboration with the Chinese technology company Tencent, which holds a substantial stake in Tesla.

The official Tesla China Twitter account has also offered up some free wallpapers from the video game. Now, you can glam up your mobile phone with one of these cool Tesla wallpapers.

These contemporary marketing tactics aim at a younger generation in China via gaming platforms. In turn, this should strengthen the Tesla brand among a desired target market — the next generation of Tesla owners.

Could something like this be coming to the U.S. or Europe? Elon Musk responded “Something fun is coming” in a tweet when a follower had asked to be able to play PUBG on the in-car Tesla touchscreen. In fact, a recent "deep crimson" colored Tesla was spotted which looks like it's got a familiar purple tint.

Regardless of new car colors, perhaps this was just a hint that Tesla owners might be getting something interesting as part of their in-car entertainment soon — so be sure to stay tuned for Tesla's next software update.
===