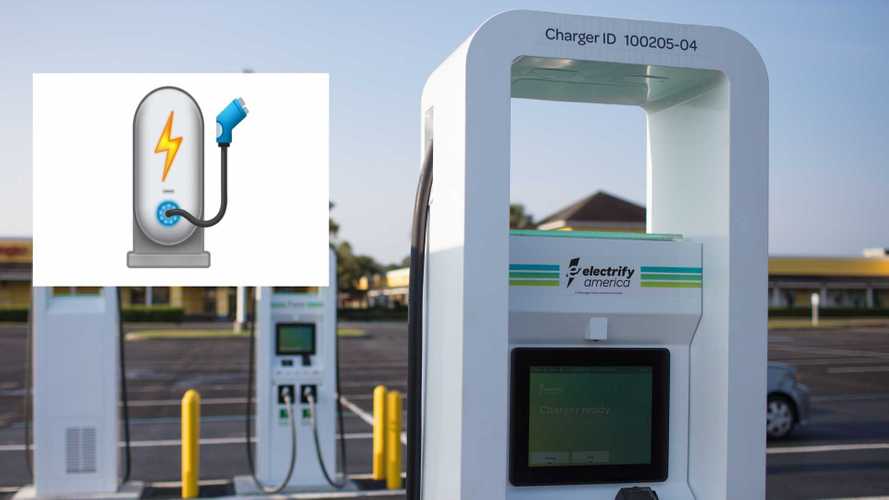 If at first you don't succeed...

Electrify America is at it again with another electric vehicle charger emoji application. After a failed first attempt, Electrify America has revised the emoji and established a petition for support.

You may remember about this time last year we ran an article on the charging network's efforts to have a charging station emoji accepted by the Unicode Consortium. the governing body that establishes emoji.

In fact, the Unicode Consortium the entity responsible for all computer characters, whether emojis, letters, symbols, and so forth. It assigns each new character a number that allows you to insert them in any computer system.

However, Electrify America's EV charger emoji submission was rejected by the Unicode Consortium last year, and the official response they received is that instead of a special EV charger emoji, people could simply use a gas pump emoji, followed by a lightning bolt emoji.

“Emojis represent today’s emotions, feelings and activities, and when it comes to transportation, that should include electric vehicle culture,” said Rich Steinberg, director of marketing, communications and Green City initiatives at Electrify America. “Pushing for an emoji that reflects the experiences of EV drivers is part of Electrify America’s goal to increase EV awareness and adoption, and support the transition to a cleaner energy future – a shift that will have impact on Americans and people around the world.”

I don't think most EV drivers would agree with that logic, and evidently Electrify America doesn't either, so they created a new EV charger emoji which they have submitted for consideration. They have also started a change.org petition in support of the new emoji. Take a minute and add your support to the petition if you'd like to have the EV charger emoji formally accepted.

Thoughts? Do we really need a dedicated charging station emoji? I guess not, but if you look at all of the other emojis out there - and there are approximately 3,300 official emojis, it makes sense to consider an EV charger emoji. After all, there is a gas pump emoji, so if you're going to have an emoji for the fueling station of the past, why not have one for the fueling station of the future? Let us know what you think in the comment section below.

RESTON, VA (July 14, 2020) – Ahead of World Emoji Day on July 17, Electrify America – the largest open electric vehicle (EV) fast charging network in the U.S. – announced a new proposal to introduce the first-ever “EV Charger” emoji for smartphone keyboards. The proposal was officially submitted for consideration to the Unicode Consortium, the governing body for emoji creation.

Currently, the only emoji for vehicle fueling is a gas pump. With the continued growth of the EV marketplace and proliferation of EV charging stations, the emoji lexicon should be updated to accurately reflect current culture and include this common alternative mode of vehicle fueling. While some may be able to creatively interpret ‘electric vehicle charging’ from a gas pump emoji placed next to a lightning bolt emoji, the millions of drivers who rely on EVs know that this is not an appropriate substitute for the unique experience of charging an electric car.

“Emojis represent today’s emotions, feelings and activities, and when it comes to transportation, that should include electric vehicle culture,” said Rich Steinberg, director of marketing, communications and Green City initiatives at Electrify America. “Pushing for an emoji that reflects the experiences of EV drivers is part of Electrify America’s goal to increase EV awareness and adoption, and support the transition to a cleaner energy future – a shift that will have impact on Americans and people around the world.”

After offering an “Electric Vehicle with Charger” emoji on World Emoji Day 2019 and receiving a decline from the Unicode Consortium, the EV charging company felt strongly enough about accurately representing EV chargers and the future of transportation through emoji to create and submit a new design. The new “EV Charger” emoji design takes feedback from the committee into account, streamlining the emoji to focus on solely the charger.

EV adoption is trending upward, with passenger EV sales increasing from 450,000 in 2015 to 2.1 million in 2019[1].
More automakers are committing to manufacturing them – last year, automakers announced a combined $225 billion to investments in electrification[2]. According to publicly available information, major brands including Audi, BMW, Ford, Genesis, GM, Hyundai, Jaguar, Kia, Mazda, Mercedes-Benz, MINI, Tesla, Volvo and Volkswagen plan to release new EVs later in 2020 or 2021.
It’s estimated that by 2022, over 500 different EV models are expected to be available globally, and by 2040, over half of all passenger vehicles sold will be electric[3].
As new models of electric vehicles come to market and more consumers adopt EVs, the charging industry is adapting – the global number of publicly accessible chargers increased by 60 percent in 2019[4], and it’s estimated that the U.S., China and Europe will install over 29 million EV charging stations by 2030[5].

How to Get Involved

To support the creation of the “EV Charger” emoji, consumers can express their excitement on social media using #EVmoji and visit Change.org to sign a petition.

Electrify America LLC, the largest open DC fast charging network in the U.S., is investing $2 billion over 10 years in Zero Emission Vehicle (ZEV) infrastructure, education and access. The investment will enable millions of Americans to discover the benefits of electric driving and support the build-out of a nationwide network of workplace, community and highway chargers that are convenient and reliable. Electrify America expects to install or have under development approximately 800 total charging stations with about 3,500 DC fast chargers by December 2021. During this period, the company will be expanding to 29 metros and 45 states, including two cross-country routes, delivering on its commitment to support increased ZEV adoption with a network that is comprehensive, technologically advanced and customer friendly. Electrify America also offers home charging solutions for consumers with flexible installation options. For more information, visit www.electrifyamerica.com and https://media. electrifyamerica.com/.