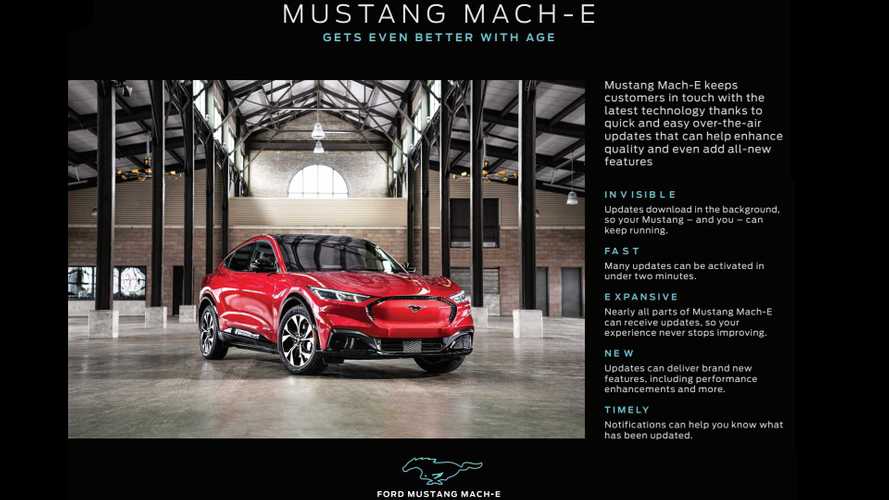 Owners will also be able to schedule them for less downtime.

Although over-the-air (OTA) updates were a welcome feature in Tesla vehicles, we told you in February Tesla decided to force some of them to customers that did not want them. Ford said the Mustang Mach-E will also have these updates and gave more details about them today.

The major difference Ford promises to have with its updates is that most will take less than two minutes to complete. The company promises to warn about longer ones so that Mach-E owners can schedule them for more convenient times, such as the middle of the night or another time in which the EV is not in use.

Scheduling is something Tesla already offers for its OTA updates, as you can see in the video below.

Some Tesla owners have already complained about updates that happen without further notice and in inconvenient situations. Still, we were never able to check if they were familiar with the scheduling procedures or not.

Ford did not mention if owners will be able to choose whether they want the updates or not. The company also did not say if these updates will be classified in any way, such as safety updates, feature updates, and so forth. That would allow clients to be able to choose if they will perform then or not in case there is an option.

Gallery: Will The Ford Mustang Mach-E Have More Convenient OTA Updates Than Teslas?

According to Ford, OTA updates will also be available to “most redesigned vehicles in the US,” which will undoubtedly include combustion-engined vehicles. These updates will not be restricted to the SYNC multimedia computers, but rather to “nearly all Mustang Mach-E computer modules.” We have no idea what will be updated in ICE vehicles apart from SYNC.

Ford says one of the goals of the OTA updates is to reduce dealer trips. In Tesla’s case, that makes perfect sense, but not in Ford’s.

Tesla works with a direct-sales model, and Tesla Service Centers belong to the company. The fewer visits they receive, the better. Ford works with the traditional dealership model, and these dealers need visits to make a profit.

In COVID-19 times, Ford engineers tested these OTA updates as a real need to avoid meeting other members of the team in person. The company claims they have managed to reduce programming times from five hours to less than ten minutes.

We hope Ford seizes the chance to work on something Tesla already does to improve it. In case the Mach-E has a mandatory update, it would be nice if Ford disclosed why it is vital in the first place. If it has updates that are not safety-related, Ford would be very welcome to tell clients about that and allow them to accept them or not. At the end of the day, that could make the difference between buying a Mach-E or another EV.