Tesla Model 3 was the best-selling car, while Jaguar I-PACE was second. Together they took 75% of BEV registrations.

April 2020 is an extraordinary month in most markets because the COVID-19 lockdown highly affected the automotive market. Here we take a look at the UK, one of the first countries to release new car registration data.

The British car market collapsed. Only 4,321 new cars were registered in April, which is 97.3% less than a year ago.

An interesting thing is that the plug-in market appears to be significantly less affected - down 57.3% to 1,469, because the all-electric car segment was almost immune to the lockdown (at least on paper). BEVs went down only 9.7% to 1,374, thanks to fulfilling orders from previous months. We will see the true level of demand for BEVs later this year.

As a result, 31.8% of all new registrations were electric cars (34% including plug-in hybrids)! Kind of surrealistic, as April was one of the slowest months ever.

"Fleet orders represented by far the bulk of the market, taking 71.5% market share, equivalent to 3,090 units, while private buyers registered just 871 cars – a year on year fall of –98.7%. The distortion was reflected across all segments and fuel types, with the numbers of new petrol and diesel cars joining UK roads down -98.5% and -97.6% respectively, as plug-in hybrid vehicles (PHEVs) declined -95.1% and hybrids (HEVs) -99.3%. Meanwhile, the niche battery electric vehicles sector saw a smaller percentage decrease of -9.7%, as some pre-ordered deliveries of the latest premium models were able to be fulfilled."

The SMMT's forecast is that in 2020 new car registrations will decrease to 1.68 million, on track for the worst performance since 1992’s 1.59 million units.

On the other hand, all-electric car sales are expected to double in 2020 to 77,300, thanks to many new models. 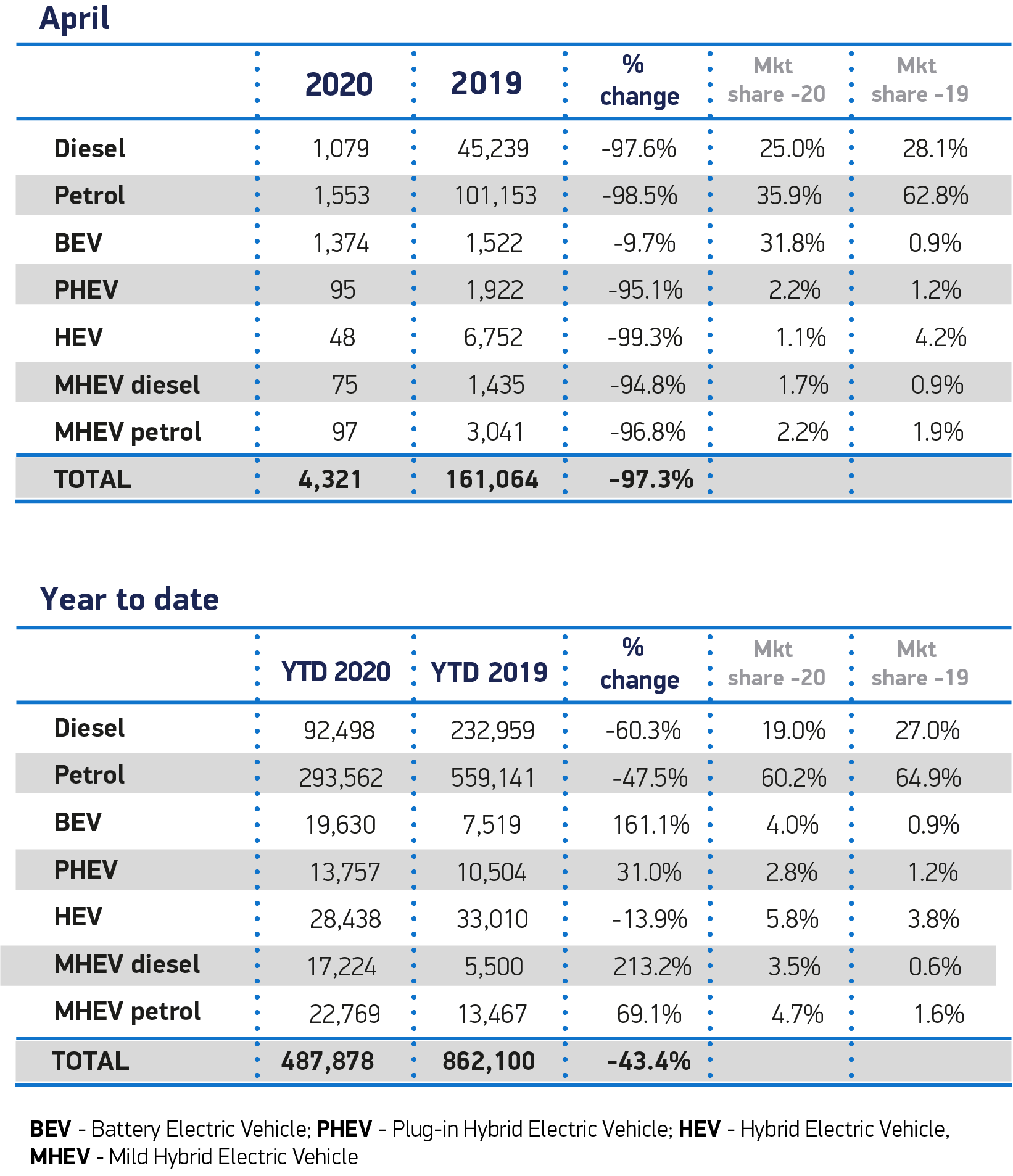 Tesla Model 3 and Jaguar I-PACE turned to be the top-selling models in the UK for the month of April with 658 and 367 new registrations respectively! By the way, Model 3 is finally is being named properly, instead of "Other".

Significant deliveries of the Model 3 translated into 48% of all BEVs for the month, while I-PACE noted almost a 27% share. Those two models together accounted for 75% of all BEVs.

Down the table, we see also Nissan LEAF (72) at eight, together with Mercedes-Benz A-Class.