A Tesla spokesperson claimed the carrier truck caused the blaze, not the Teslas.

What is there in a trailer to make it burn completely? Apart from its tires, probably only the content. That is what makes this fire involving a trailer with five Teslas and a Subaru very strange. It happened on September 24, at about 9:10 PM, in Nevada, close to Carlin, at the Interstate 80. 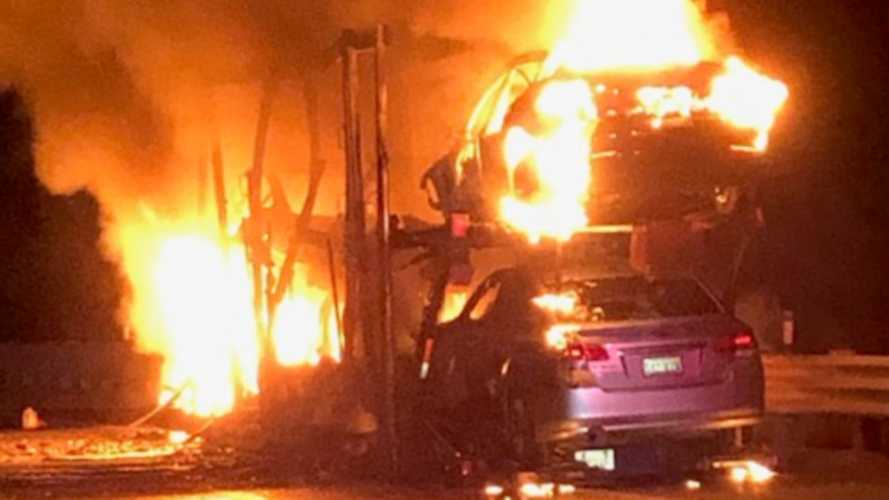 The Elko Daily first reported the fire and said a Tesla spokesperson has denied it started because of its cars. It would have been a problem with the carrier truck. We are having a hard time to understand how is that possible.

For you to have more details on the story, a tractor-trailer had two trailers full of vehicles. According to the local newspaper, the rear one started to present fire, and the truck driver managed to get it disconnected. Carlin firefighters were the first ones to attend the call.

Unfortunately, all the six cars that were on the trailer were destroyed. The blaze also damaged the nearby guard rail posts that were close to the trailer, and the flames almost caused a forest fire.

“The cause of the fire is undetermined at this point. The extreme heat generated by the fire has made it very difficult to determine the cause. I am not sure what basis Tesla has on saying it was the carrier so I cannot help you there,” Linda Bingaman, from the Elko County Fire Protection District, told InsideEVs.

There is no more information on the circumstances, which leads us to just wonder what may have happened.

We have no idea if the carrier truck had any damages since it is not in the Elko Daily article. Assuming it had not, what sort of issue affects the rear trailer and not the carrier truck that theoretically caused it? Nor the front trailer that was between them?

Were these vehicles new or pre-owned ones? The pictures Linda Bingaman kindly sent us show the Subaru – a Legacy – had a license plate. The Tesla right above it didn’t, so the cargo probably had a mix of new and used vehicles.

If the fire started at the trailer, could the truck driver have extinguished it before it affected the cars? As you can see, there are a lot of unanswered questions that only the ones that were there could answer.

It would be nice to talk to the truck driver, or to the company that was carrying these vehicles to get the whole picture. In case you know him or his company, please let us know.