It's not a typical review, but Porsche proves that the Taycan can live up to the promise of repeated acceleration.

Porsche did not allow for a typical test drive, so the review focuses on the plain acceleration experience. As it turns out, the car is capable of doing dozens of hard launches 0-200 km/h (124 mph) on an airfield, which means that there shouldn't be any throttling in the real world. The Taycan clearly will be the driver's cars with a focus on performance. 0-100 km/h (62 mph) takes over 3 seconds.

The video includes glimpses of an artificial sound, emitted by external speakers at low speeds. The other thing, that couldn't be shown, was the charging inlet - reportedly AC on both sides and DC on the driver's side like in the Audi e-tron. 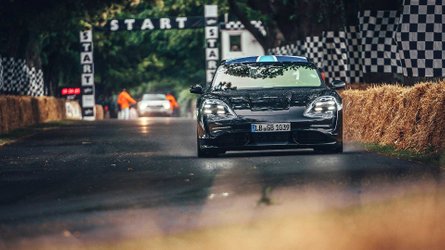 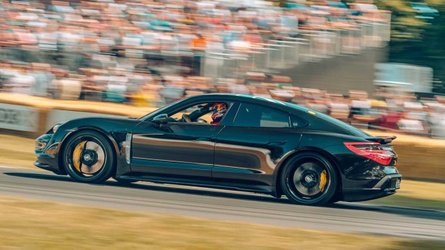 The Fully Charged Show is given exclusive access to get Jonny Smith behind the wheel of the new first Porsche all electric car - the Taycan - and drive it full throttle from 0-124 mph (200 km/h) dozens of times. The Taycan is a twin motor 600+hp, 96kWh, 800-volt 4-door 4-seater coupe with a supposed range of 320 miles. It can reach 0-62 in just over 3 seconds repeatedly, and can rapid charge at over 250kW. Prices for this 'Turbo' launch model will be around £130,000 with cheaper/slower versions kicking off around £65,000 within 18 months of the car's launch in late 2019. The Taycan is potentially as much of a milestone for Porsche as the aircooled flat six 911 was, taking aspects of the new 992, 911 and Panamera, but is ground-up all new. Jonny was allowed to take the genuine first drive of the car alone for some 30 full throttle launches, but the final spec and aesthetic details of the Taycan still remain under embargo.

Jonny's predictions for the flagship Porsche Taycan model, available later this year, were...