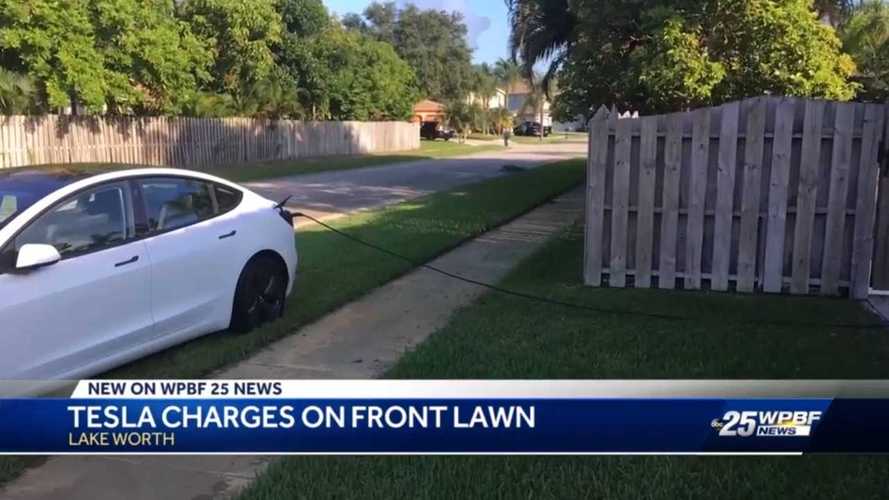 Reality is stranger than fiction. Definitely. If anyone told you someone parked a Tesla Model 3 on your lawn and left it charging for 12 hours, you would think that was a lie or the plot of a low budget B movie. But it really happened to Phil Fraumeni, a resident from Lake Worth, Florida.

Fraumeni woke up with his gardener asking him to remove his car from the lawn, but he had not left it there. When he saw the reason for being called that early, he probably did not believe it.

A white Tesla Model 3 was over his lawn. Worse still, it was plugged to Fraumeni’s external socket. Although lots of evil possibilities were on the table, the house owner did just what any decent person could do: he called the police. We may have gone so far as to call 911 since a situation like this can seem a bit scary if you don't know the details. Is the driver on drugs or drunk somewhere around the home? Is there someone sleeping in the back seat of the car that's going to confront you when you go out there?

The cops tracked the owner and he arrived to pick up the car. He had left it there for 12 hours. And, according to Fraumeni’s wife, Rose Ann, he did not even apologize for doing so. His only excuse was that his battery went dead.

And what do you do if your car stops running? You do not call for a tow truck. Or call your friends to help you pull the vehicle. You just park in front of someone’s house and use whatever they have to get things sorted! Isn’t it brilliant? Said no one ever.

Luckily for Fraumeni, this guy had an EV and not a gas-powered car. If he did, he would probably “borrow” gas from the Fraumeni’s car.

Luckily for the Tesla owner, Rose Ann was in Orland with their grandchildren. She claims on a Facebook post she would have demanded compensation. At least. It would be a lot of fun if she just pressed charges.

Fraumeni didn’t. He apparently just laughed of it all and got some of his neighbors making jokes that they would leave their EVs overnight at his lawn. If you think it through, Fraumeni is a very wise man.

There are people that buy EVs because they want to save the world and be environmentally friendly just to throw garbage out of their windows and kill decency and good manners with an alibi. Don’t be these people. EVs will love you a lot more if you don’t.

Why Have These MIC Tesla Model 3 Units Come With HW 2.5?

Is This Tesla Model 3 Towing Video Right Or Wrong?

Tesla Model 3 Window Shatters By Itself? Owner Is Accused Of FUD

Check The Ways In Which Tesla Is Cost-Cutting. But Why?
++21