Autopilot isn't a fully autonomous system, so you can't count on it to help if you fall asleep.

As you can see from the video above, this Tesla Model 3 driver doesn't seem to be paying attention to the fact that a lane is abruptly coming to an end. He's next to a semi-truck and makes no attempt to slow or get over (and neither does the car's technology).

He claims the Tesla is on Autopilot and should have braked for him. However, there's initially nothing to brake for, but rather, a merge was necessary, either by Autopilot or by the driver if the semi-autonomous system wasn't going to do so. 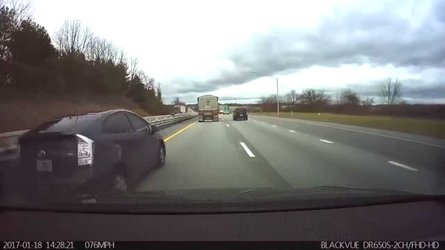 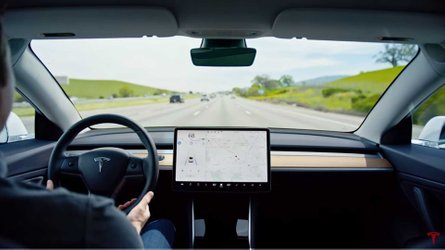 Once the lane ends, he's still driving at speed and hits the first cone. After this, the car proceeds to hit a whole slew of cones, one after another. Still, it appears there is no deceleration and it seems as though the driver is asleep or completely unaware.

When Richard FS first posted the video, many commenters called him out with information similar to the above observations. Clearly, this upset him, so he updated the video description with more details.

Richard claims the accident was his fault since he fell asleep at the wheel. However, he says Tesla's Automatic Emergency Braking failed him.

We always assert that you really don't know the exact circumstances from watching a video. We also continue to insist that you must pay attention while driving and remain in control while using Tesla Autopilot. This is because we know the system is far from perfect and doesn't always perform as you might expect it to. The car "should" have merged on its own and it "should" have slowed down and eventually stopped, but it didn't. Thankfully, even though he fell asleep, some may say Autopilot actually saved him from what could have been much worse.

At any rate, we'll leave it for you to discuss in the comment section below.

Read this entire description before you post (click on "SHOW MORE"). It will make your reply appear to be more intelligent.

Tesla Model 3 with FSD option. Automatic Emergency Braking totally failed me on the one time I needed it most. With all the phantom braking events I have experienced in the 2-1/2 months I've owned it, it does seem like it would panic when it saw this coming.

After reading about 100 comments here, I see quite a few of you are probably feeling much better now that I have given you the chance to bash the poster. And I find it interesting how many of you can take what little information I have given you about what happened and create all kinds of assumptions. Well, you don’t deserve it but I’m going to tell you… this movie clip was posted here as a reference to a Tesla forum post I did today. That forum post had basically 3 messages I wanted to relay to the readers. 1. This accident was my fault. I fell asleep at the wheel. I wasn’t sleepy prior to falling asleep or I would have done something about that. That’s actually the scary part. 2. A Tesla driver on Autopilot should not allow oneself to be lured into a false sense of security and should maintain vigilance at all times. I had monitored Autopilot for about an hour prior to the collision without a single hint of an incident. 3. Since Autopilot CAN avoid hitting a small human (either by braking or swerving or both) then I would expect that it could detect a 50-gallon drum in the middle of the road. I say that I expected this because I get sudden braking at times when there is nothing to brake about, and Tesla has told me that it detected something that could have been a hazard so it braked out of an abundance of caution. The conclusion from that is that it is better to brake when not needed that to not brake when needed. And that’s my point. If it’s so conservative on what constitutes a hazard then what about those 10 barrels? Yes, they’re plastic and not picked up by radar but a small child isn’t either, so it’s relying on those 3 forward facing cameras. Why didn’t it detect the barrels?

'
By: Steven Loveday
++
Got a tip for us? Email: tips@insideevs.com