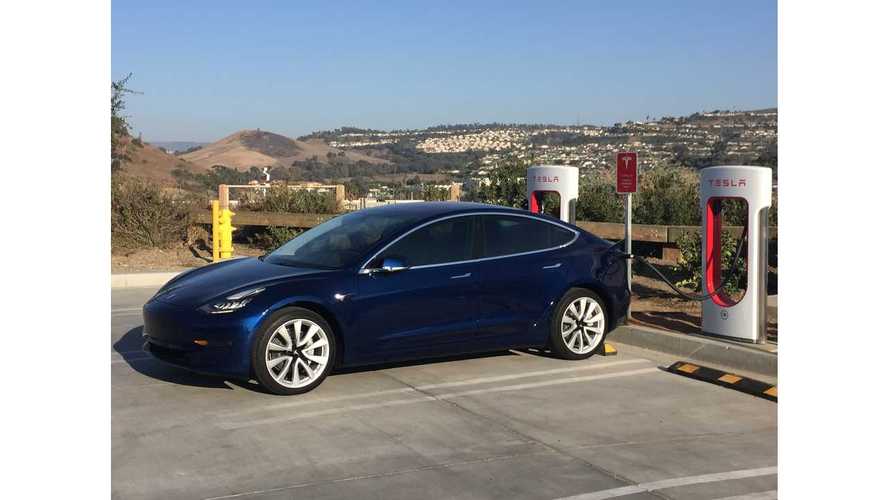 The first-ever right-hand-drive Tesla Model 3 was recently spotted on the interstate-280 California highway (see below) — I-280 has been notorious for Model 3 spottings in the past as this freeway happens to be near Tesla's headquarters in Palo Alto.

*This article comes to us courtesy of EVANNEX (which also makes aftermarket Tesla accessories). Posted by Iqtidar Ali. The opinions expressed in these articles are not necessarily our own at InsideEVs.

Above: The first right-hand-drive Tesla Model 3 was recently spotted driving on the highway (Source: Mister_Salty_Peanuts)

Tesla Model 3 reservation holders from right-hand-drive markets especially the United Kingdom have been very patiently waiting for their turn to take delivery of one of the most well-reviewed and safest cars on the planet.

Elon Musk has stated that the Tesla Model 3 is designed in a way that requires minimum engineering and tooling changes in order develop its RHD variant. In a tweet last year he said that the RHD Model 3 deliveries will probably start mid-2019. Now, with this latest Model 3 RHD spotting, the timeline appears to (hopefully) be on track.

Model 3 was designed for min engineering & tooling change for RHD. Note left/right symmetry. LHD for Europe & Asia first half of next year. RHD probably middle of next year.

Tesla brought the first display Model 3 to the United Kingdom at the end of last year after a jam-packed tour of its European stores, although this was a left-hand-drive United States version of the car, it gave reservation holders a chance to experience the vehicle first-hand.

EV Maps, a British electric vehicle routing website talked to Tesla's staff in the United Kingdom last month and was able to learn that the Tesla Design Studio / Model 3 Configurator will be open to RHD markets in the next month or so.

Above: EV Maps gets some inside information about RHD Tesla Model 3 launch in the United Kingdom (Twitter: EV Maps)

The right-hand-drive Model 3 was spied in a basic black color with aero wheels and according to the Tesla subreddit user who photographed this rarity, Mister_Salty_Peanuts, this specific RHD Model 3 had a 'Dual-Motor' badge on the rear — unfortunately he was only able to snap one photo.

In the typical Tesla roll-out strategy, higher-end variants likely will be first introduced to the RHD markets (mainly the United Kingdom and Australia). Sometime after that, Tesla's new base trim, lower-priced Model 3 will be available.

Written by: Iqtidar Ali. An earlier version of the article originally appeared on X Auto.