Electric Porsche Blows Away McLaren 720S At The Strip: Video

The electric Porsche has dual 11-inch DC motors powering the rear wheels. It can produce up to 980 horsepower and 1,500 pound-feet of torque.

That battery-powered Porsche is brutally quick.

The McLaren 720S has been a favorite subject of drag races because it rarely loses. It does so a few times but it's either it had a bad start or it was against a modified 1,000-horsepower version of it. Heck, it even won against two Lamborghinis and one Ferrari in a European drag race. And who would forget its win against a Bugatti Chiron and two Ferraris? With its track record, or should I say "drag race" record, the 720S is a force to be reckoned with when it comes to straight-line races.

This time, however, the British supercar is facing a rather odd opponent: a modified Porsche that doesn't use fuel. In short, an all-electric Porsche that isn't a Taycan. 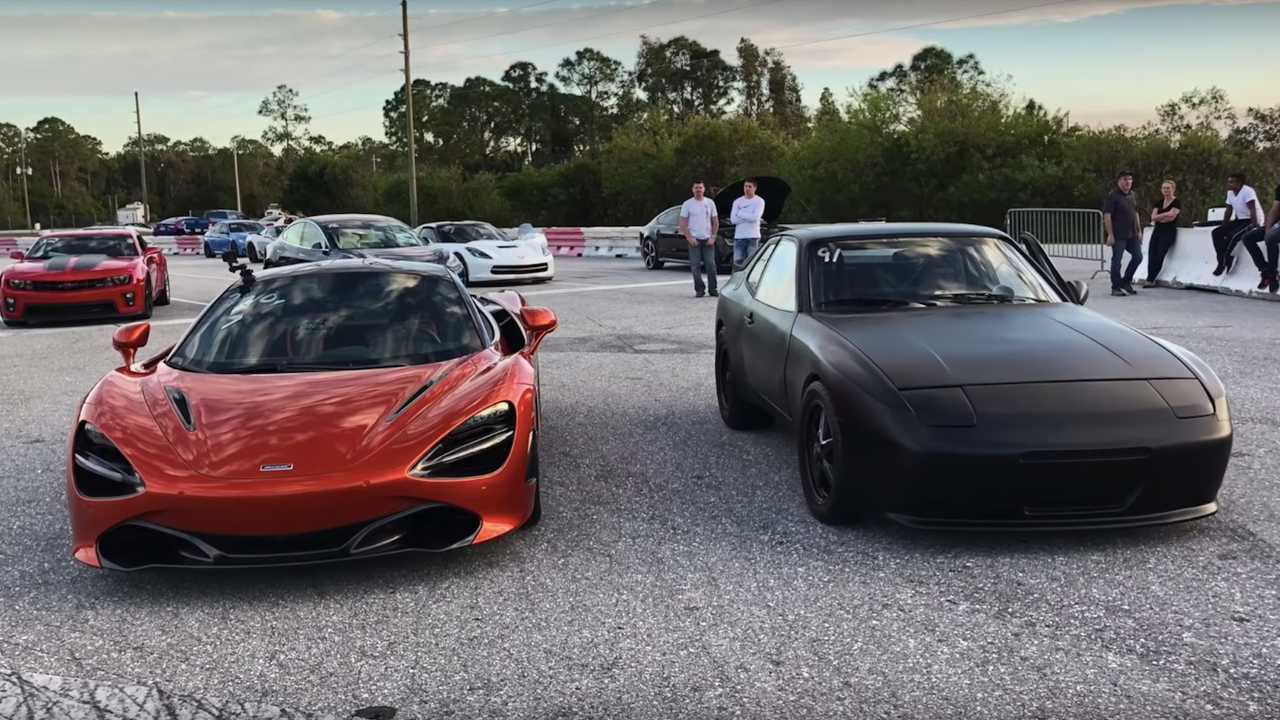 In this episode of the DragTimes, the 720S lost to a non-Taycan all-electric Porsche. And it wasn't just a loss – the distance between the two cars was huge. Before you start watching the video above, let's have a little tale of the tape to compare the numbers of both cars.

The McLaren 720S is powered by a 4.0-liter twin turbo V8 that produces 710 hp. It's rear-wheel drive and equipped with a seven-speed dual clutch transmission. It weighs a total of 3,180 pounds.

On the other hand, the all-electric Porsche has dual 11-inch DC motors powering the rear wheels. It can produce up to 980 horsepower and 1,500 pound-feet of torque while weighing only 2,450 pounds.

The owner of the amazingly fast Porsche posted this on Facebook:

I had a great time Sunday at Street Car Drags at Palm Beach International Raceway. There were many Teslas there even with their own generator truck with 2 Tesla super charges on board. I was able to make 5 runs in Black Pearl which is usually impossible at PBIR. I went all day undefeated. I must have beaten over 1 million dollars worth of supercars in my old 944.

My first victory was against a M5 BMW with turbo upgrades, then a Lamborghini, next was my closest race against a pro charged late model Corvette. He ran a 9.73 against my 9.70. My last 2 races were against a Mercedes AMG BI Turbo which I blew away with a 9.50. Finally Brooks was setting up a race for me against a new Demon. Unfortunately the Demon was already in the trailer but that race is to be done on a future date. Brooks said come on against his 9.90 Mclaren. That was my last race of the day posting a 9.41 at 143 mph.

Watch for this in a future Drag Times video. We had both cars set up with cameras. Brooks said I stole the show for the entire Drag times day. The 9.41 is also a new MC/3 ED record. I am no longer a high school teacher, I now teach at Sheridan Technical College in Hollywood Florida. The school system allowed me to transfer the 2 warp 11 motors which were purchased with school board monies. Other than that the Black Pearl is mine.

Special thanks to John Wayland who several years ago sponsored one of my z2k's and Shawn Lawless who loaned me the other z2k after mine blew a dc-dc converter and has to be repaired. The Lonestar Battery Pack I built with made it all possible. I do have the 1500 hp battery pack I built for Don Garlits setting in my shop. Someday I will build one to equal that and BP will be an 8.90 street legal electric vehicle.