What Happens When You Cut Into A Tesla Battery Cell? 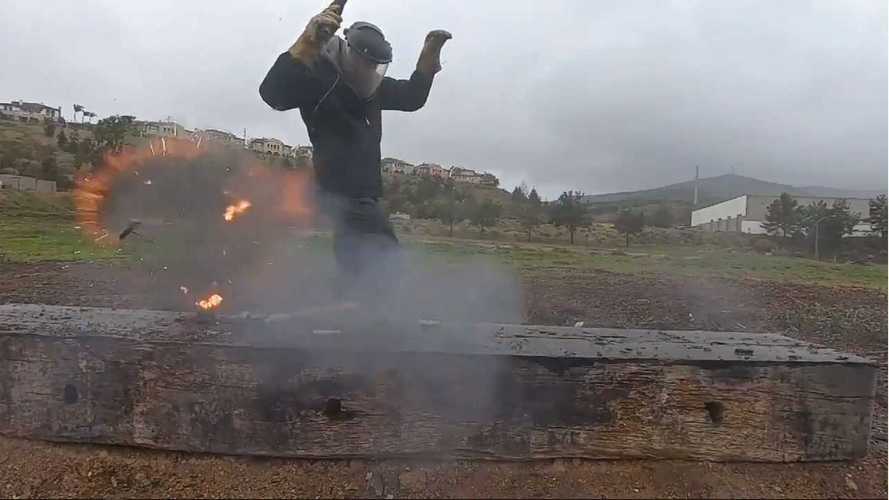 Don't try this at home.

A wise man once noted there are a few things one should never do. Things like pulling on Superman's cape or spitting into the wind, for example. Now, we would like to add a new item to this list: don't drill into a Tesla battery cell. As you can see in the video below, tweeted out by Ben Sullins of Teslanomics fame, there is a good chance it will combust, and mayhem may ensue.

The short bit of footage was tweeted out along with the text "What happens when you cut into a Tesla battery cell? Fun at @EVWestDotCom." We take it, then, that the TeslaTuber was visiting the EV West electric vehicle conversion shop in San Marcos, California, north of San Diego.

Known for having fun while creating awesome electric vehicles, the folks here haven't thrown caution completely to the wind while performing this "scientific" experiment. Performed in a wide open space, the person drilling into a cylindrical cell from a Tesla battery pack --presumably an 18650-type cell -- is wearing some face protection. We also note that the camera is on a stand, so as not to endanger a videographer.

After being pierced, the cell appears to short out causing a rapid release of stored energy. Unconstrained by a physical container, the cell launches itself into the air, spinning and spitting sparks as the igniter attempts to jump back out of the way. We saw similar, possibly even more dramatic, fireworks recently after the Rich Rebuilds crew overcharged a Tesla battery module in its "princess car."

Obviously, this is something people should not try at home. Things have a way of going wrong at the worst possible moment and the next thing you know, someone's received physical injuries or burned down a car or structure. Better, we think, to just watch the video below of others tempting fate and remain safe. Enjoy!

What happens when you cut into a Tesla battery cell? Fun at @EVWestDotCom pic.twitter.com/NRRNURO6gI