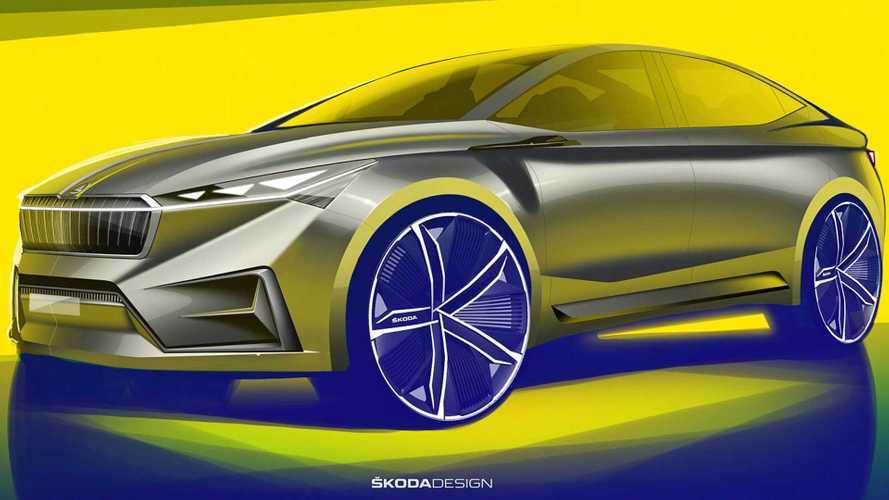 It appears we're looking at an electric crossover-coupe with a sharp design.

Skoda confirms it's an electric crossover-coupe based on the MEB platform, riding on 22-inch wheels.

With the Volkswagen Group announcing an armada of electric vehicles, it makes sense that Skoda will also play an important role in VAG’s zero-emissions ambitions. The Czech marque has already announced plans for a purely electric Citigo, which will follow the company’s very first electrified model – the Superb plug-in hybrid due most likely next month in Geneva. By 2025, Skoda will have a total of 10 electrified models in its lineup, including six pure EVs.

Skoda Vision E Electric Will Be Offered In SUV Form

To signal the brand’s eco-friendly agenda, Skoda will display the new Vision iV concept next month at the same Swiss show. The two teaser images are showing a crossover-coupe mashup riding on oversized wheels like you’d come to expect from a concept. Conventional mirrors have been replaced by side cameras, and there’s no sign of regular door handles. The absence of a B-pillar could be a sign of suicide doors.

The Vision iV embodies Skoda’s latest design language with a focus on sharp lines and edges, while still carrying the corporate front grille despite the concept’s lack of a combustion engine. Overall, it looks like an evolution of the Vision E introduced in 2017, and might be closer to production than the original concept. Obviously, it’s not quite there yet.

With Skoda revealing plans for a production-ready Vision E due in 2020 as the brand’s first MEB-based vehicle, we won’t be too surprised if the Vision iV is going to be a follow-up to the 2017 concept.  Technical specs are not available at the moment of writing, but the Vision E had dual electric motors with a combined 306-horsepower output, 311 miles (500 kilometers) of range, and a top speed of 112 mph (180 kph).

The public debut of the Skoda Vision iV (after the E, X, and RS) is scheduled for the first press day of the 89th Geneva Motor Show, on March 5.