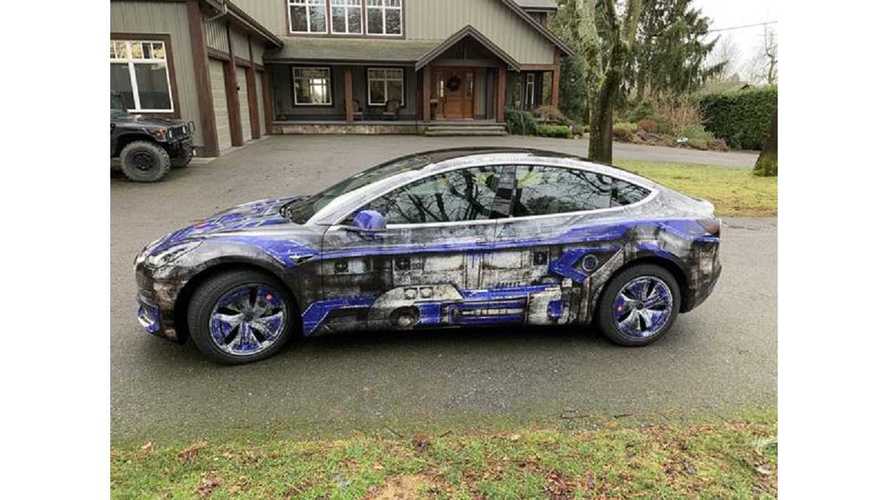 CHECK OUT THE R2-T3, A STAR WARS INSPIRED TESLA MODEL 3

There's no doubt that Peter Litherland is a serious Star Wars fan. Growing up in Vancouver, Peter dragged his Mom to the theater to see the original Star Wars film back in 1977. Nowadays, he dresses up as a Star Wars character every year for Halloween. So when Peter decided to get a Tesla Model 3, he had an idea.

Peter's last new car, a Toyota Prius, was purchased in 2009. He put a deposit down on a Tesla Model 3 on April 1st, 2016. According to Peter, although the Model 3 is not yetfully autonomous, "I knew long before delivery that this self driving car would be like R2-D2, a self-aware droid... How cool would it be to paint it up like R2?"

Above: Even the wheels showcase Peter's attention to detail (Facebook: @R2T3droid)

Peter didn't paint his Model 3 though, he went with a vinyl wrap. He approached a local company, Vinyl Labs, and they hired an artist to come up with the look. Peter explains, "We discussed the R2-D2. Should it be clean or distressed. Ended up with the distressed look as it gave more character and depth."

Above: A rugged robot that feels at home in nature (Facebook: @R2T3droid)

After the transformation was complete, Peter says, "Walking into the studio to see the work done was amazing. I had to stand back and absorb it all. They did an amazing job... Driving home that evening I had a few people smiling and giving me a thumbs up. I get lots of people staring at it when it’s parked in public. Who doesn’t like R2-D2?"

Above: Peter even got his license plate "branded" to correspond with the look (Facebook: @R2T3droid)

Peter explains, "I hope to help promote EV adoption and I see internal combustion engine cars like celluloid film going digital. Eventually gas cars will only be a novelty. The Tesla Model 3 costs less than a tenth to drive compared to ICE cars. Under a penny to drive 1km. Without any oil, oil filters, transmission fluid, intake filters, mufflers etc.,  maintenance cost is low. No gas stations to stop at, just charge at home and if I go on a road trip, I just have stop at a supercharger for 30 minutes."

Proud of his new droid, Peter says, "I call it R2-T3. Inspired by R2-D2 on the Tesla Model 3. Now with the summon feature activated, I can make it drive a little using the app on my phone. Maybe one day, R2-T3 will be driving itself around Vancouver as Tesla pushes out updates over the air to the car. The car has been better than I expected too and am very happy with the Tesla Model 3."