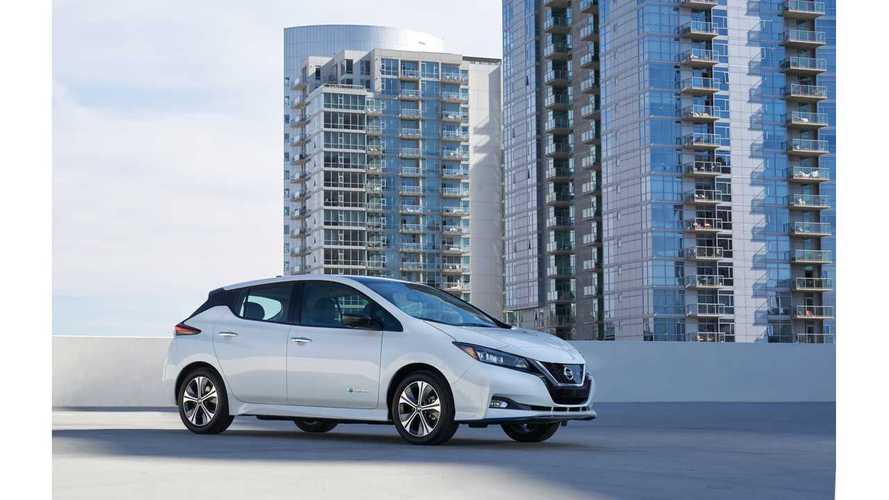 The Nissan Leaf is the world’s best-selling BEV with almost 400,000 sold since 2010. But Nissan hasn’t been resting on their laurels, instead, continuously improving the Leaf, and has now released what is the best Leaf—as in the one with the ability to go the farthest—so far–the 2019 Nissan Leaf Plus (also known as the Leaf e+ in other markets).

Nissan is trying to leave the short-range EVs behind

The big news announced at the 2019 Consumer Electronics Show in Las Vegas is that the Leaf Plus increases its battery capacity 55 percent to 62 kWh, and its EPA range on a single charge is now approximately 50 percent more than the 40-kWh Leaf at 226 miles (385 kilometers). This puts the Leaf in the 200+ mile club.

The Leaf Plus will be hitting markets worldwide in the spring of 2019 and builds on the recent release of the second-generation 40-kilowatt-hour (kWh) Leaf introduced last year that will continue to be available.

It is possible that the Leaf Plus EPA mileage rating might be lowballing its actual range. The 40-kWh Leaf has an EPA range of 151 miles, but owners routinely report achieving ranges of 165 to 175 miles. If this hidden range carries over to the Leaf Plus, potential ranges of 260 miles are possible.

With a bigger battery comes more demands for better fast charging. The Leaf Plus continues with the CHAdeMO system, but its power has increased from 50 kW to 70 kW (100-kW peak).

There was a collective sigh of relief with the long overdue announcement of the Leaf Plus and its 62-kWh battery. More than three years ago this battery was first revealed by Nissan, but then disappeared from view. While Nissan has been silent on the details of the delay, the company’s efforts to sell its battery manufacturing subsidiary Automotive Energy Supply Corporation (AESC) to a Chinese investment group–and the subsequent collapse of that deal—may have been a factor in the delay. Nissan still owns AESC and manufactures both the 40-kWh and now the 62-kWh batteries for the U.S. market in its Smyrna, Tennessee, factory.

The new 62-kWh battery fits into the existing Leaf chassis with no modifications to the floor plan. The battery pack is slightly taller than the 40-kWh version and to accommodate the height, Nissan raised the suspension of the Leaf Plus .02 inches for clearance. The pack is slightly heavier, with the vehicle gaining about 300 pounds. A new flexible laser welding technology allows for more compact cell modules. The new pack has three different module shapes, each with a different number of cells (12, 21, 27 cells) where the previous battery has only one module size with eight cells. The new arrangement allows for 55 percent more battery capacity as the 40-kWh battery in the same space.

The new pack’s cells are laminated, and there are 288 of them vs. 192 in the 40-kWh pack. The chemistry is more heat tolerant, with a nickel manganese cobalt cathode, a graphite anode and an improved lithium electrolyte. Nissan continues to stick with passively air cooling for the bigger battery. With the continued improvement and tweaking of the cell chemistry since 2013, they feel that the service life and durability of the battery and its ability to operate at higher temperatures will be sufficient, such that active cooling systems, along with their increased complexity, weight and cost, are not necessary. It appears that the multiyear development and testing of the 62-kWh design have given Nissan that confidence. To back that, Nissan continues to offer its eight-year/100,000-mile as standard on all Leaf models.

The Leaf Plus is now capable of charging at around 70-kW with a peak of 100-kW and allows the 62-kWh Leaf Plus to achieve 80-percent charging times similar to the 40-kWh Leaf. This increased charging speed also helps the battery pack run cooler during charging sessions and increases its durability. The net effect mitigates performance and capacity loss over years and many charging cycles.

Charging with the Leaf Plus is faster

Last year, Clean Fleet Report took a 2018 40-kWh Leaf on a 500+-mile road trip in California from Monterey on the coast to the Sierras and Lake Tahoe and back. We found it to be a vehicle more than capable of freeway and mountain driving. While we only briefly experienced the charging slowdown that some have noted, we can hardly wait to drive the same route with a Leaf Plus and report what we found.

The interior may look the same, but software updates are now OTA

ProPILOT is an advanced driving assistance technology that works on single-lane driving. A ‘hands-on, eyes-on’ system, it allows the car to stop, restart and stay centered in its lane in higher-speed cruising and lower-speed congested traffic scenarios. The technology is designed to reduce driving stress and fatigue, enhancing driver confidence behind the wheel.

In the cockpit, the instruments and displays are updated with a new interface that includes a larger 8.0-inch display with better smartphone integration. Software updates are now over the air (OTA).

Both the 40-kWh and 62-kWh cars are available in S, SV and SL trim levels. Pricing for the Plus has not been announced yet for the US market, but expect a $4-$6,000 premium for the Leaf Plus compared to the old Leaf. Nissan is all about value and maintaining its lead in the low-priced BEV market. The 40-kWh Leaf S will continue to lead that game with pricing under $30,000 and it would not be surprising if they deliver a 62-kWh Leaf S Plus for under $35,000 or less.

The exterior and interior appointments of the Lear Plus carry over from the Leaf; the only indication that it is a Plus model is a small badge on the rear hatch.

Leaf Plus will be a winner

Clean Fleet Report thinks that there will be significant worldwide demand for the Leaf Plus despite the upcoming competition from Kia, Hyundai, VW, Tesla and others. The Leaf pioneered the affordable BEV market and had stayed relevant because of Nissan’s continued improvements over the last nine years. The Leaf’s quality is the standard for the industry. It’s not uncommon for owners to report never having an issue with their vehicles other than replacing tires and wipers. Early cars had problems with the traction battery degrading, but Nissan solved that issue and stepped up confidence with a battery warranty that became the industry standard. The fact that there is increasing competition in the BEV space is excellent news and shows the worldwide conversion from internal combustion to electromotive propulsion is irreversibly in motion and has reached the tipping point. If Nissan had not risked being first, would that have happened?