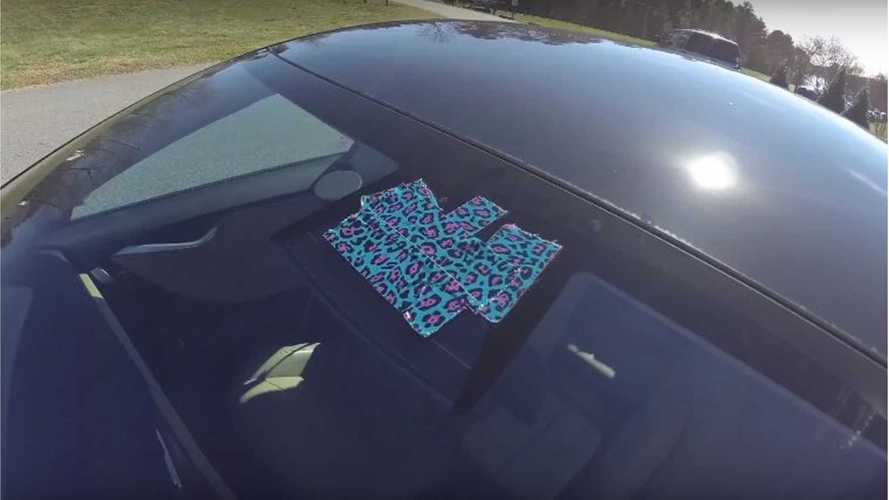 Which Tesla Autopilot cameras are activated, and can the car drive itself with multiple cameras rendered useless?

"Hold on while I blindfold my Tesla!"

***UPDATE - March 21: This post obviously piqued another Tesla owner's interest and skepticism, so he did his own experiment, which attempts to "debunk" this story. Check out the video at the bottom of this post, with different results. Sadly, it's not very easy to watch due to the camera work, but the point comes across just fine.

YouTuber and Tesla Model S owner Brian Jenkins (AKA i1Tesla) decided to have a little fun with Autopilot cameras and tape. Not knowing for sure which cameras are even activated at this point, as well as specifics about the car's ability (or inability) to function in Autopilot mode with various cameras incapacitated, he felt the need to perform an experiment.

As you can see from the video, Jenkins used somewhat of a system of covering and uncovering various cameras, then initiating Autopilot. Interestingly, the Model S will let Autopilot control the car with most cameras covered.

Unfortunately, he didn't check to see what happens when every single camera is covered. We really wish he had because there's a chance the car would have still initiated the self-driving feature, although it would have driven very badly.

What does this all tell us?

Well, you can look at it in a few different ways. It's nice to know that if rain or debris blocked a camera, your car would rely on the others and keep doing its thing. However, perhaps you wouldn't want it to keep on keepin' on since there's a chance it wouldn't work as safely ...

Moreover, if this is simply a glitch ... meaning the car should not allow Autopilot to engage with all of these cameras covered, but the system doesn't understand that this is a huge problem, then there's big trouble here. As you can see near the end - when the Model S is driving itself and only the side-pillar cameras are "seeing" - it's all over the road and may have crashed if Jenkins didn't take over.

With all of these cameras activated and seemingly working as their supposed to, reports are saying that the system is drastically improved. The newly-activated cameras on the pillars have reportedly cut down on the "ping-ponging" issue.

Hopefully, the system is much safer now and continues to improve. However, we can't say we're not a bit concerned that Autopilot will still attempt to drive the car when it can't see! We surely wouldn't choose a blind chauffeur.

I taped up the cameras to see what would happen. Found out something very cool. All the cameras seem to be on and operational.

Check out the new "debunking" video below (Hat tip to scottf200!):

Quick edit. After watching a video in which someone covered up the front windscreen camera-unit, side repeaters and only left the B-pillar cams totally uncovered on his AP2-Tesla, I felt like putting the line-detection capabilities of the AP2.0 hardware and software to the test myself. Debunked the assumption that autosteer can be activated with the front unit covered and totally relying on B-pillar camera's for line-detection. However, Autosteer can still be activated when the 3 front camera's are partially obstructed in their view. Although, output by the system becomes very poor, as demonstrated in this video. Region: The Netherlands, EU