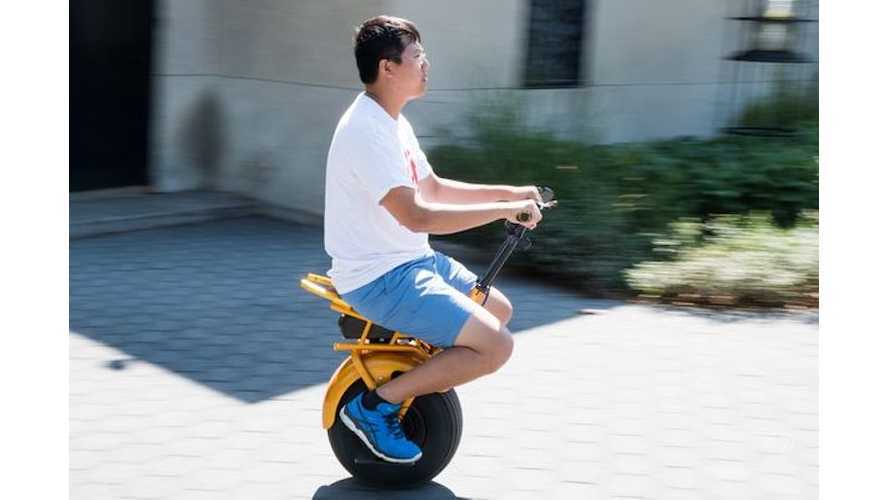 Say Hello to the Uno Bolt, a Self-Balancing Monowheeler

The unicycle has been around nearly as long as the bicycle, but one-wheelers have only recently emerged as practical transportation. Okay, well, semi-practical. Despite their shortcomings, the marriage of small electric motors and gyroscopes has at least made powered unicycles more accessible.

A report on theverge.com recently displayed the Uno Bolt, a self-balancing single-wheeler that sells for $1,500. Resembling a sit-down Segway with one chubby tire, the 45-pound Bolt was created by designer Sean Chan, who describes it as “the quickest responding gyroscope to be put into a one-wheel machine.”

The Bolt’s steel frame supports 280 pounds, though a lighter rider may be necessary to reach the posted top speed of 22 miles per hour. The 1000-watt motor has a claimed range of 25 miles, and battery recharge time from zero is 45 minutes. The Bolt can reportedly climb a 45-degree grade, and includes amenities like folding footrests, rearview mirror, and LED lighting.

While riding the Bolt seems a less than entirely intuitive process, the videos do show operators cruising along with apparent ease. Lean forward to accelerate, back to slow, and into the direction one wants to turn. A "Tire Assist” feature reportedly adjusts the tire pressure to prevent leaning too far. Hmm.

Interviewed by Men’s Journal, Chan said he was inspired to build the Bolt just to see if it was possible. The model shown is the the third version of the build.

“The second version was not released to the public,” he said. “But we ended up selling the V2 to James Cameron’s production company. Expect to see the V2 in the upcoming James Cameron movie, Alita: Battle Angels, coming out next year.”

Electric monowheelers like the Ryno have been around for a few years, but have yet to achieve any sizable production scale. The electric Onewheel skateboard is gaining popularity, adding the dynamics of snowboarding and off-road capability to the experience. (“Hack your commute, dominate any terrain and try to wipe that grin off your face!”)

In other words, the practical applications of monowheeling are less important than the fun factor. And while we will no doubt face issues of where and how they are used - sidewalks? bicycle lanes? - the era of electrified unicycling is at hand. Let’s be careful out there.