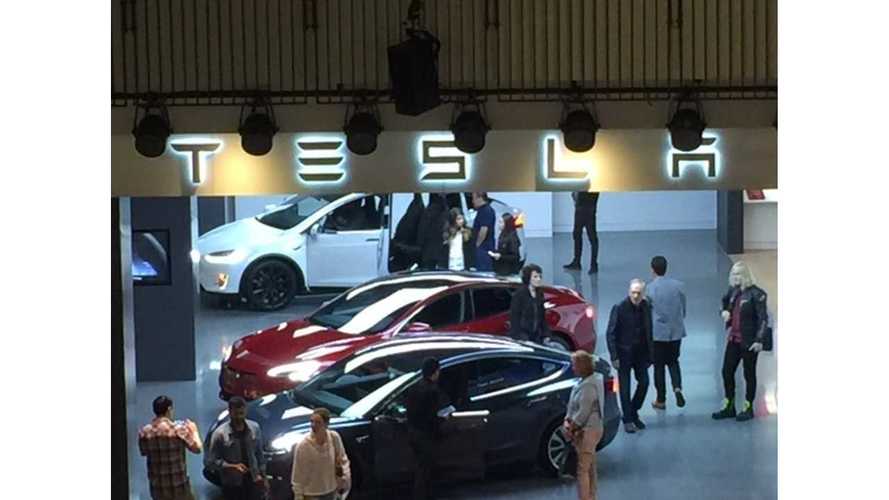 More Tesla Model 3 reservation holders will finally get to see the popular car before taking delivery.

Tesla Model 3 in Boston (via pjwood1) - click to enlarge

As we previously reported, Tesla finally put the Model 3 in a few of its California showrooms (specifically the Palo Alto - Stanford Shopping Center and Los Angeles - Century City). It was starting to seem like the car would never be in showrooms, or at least not many, due to the early production bottlenecks and the fact that the automaker has to fill about a half-million pre-orders.

Now, Tesla will be adding a Model 3 to a few other key locations in California. Soon, people will be able to check out the car at the Tesla showroom in Walnut Creek, as well as the Santana Row store in San Jose.

While these California locations don't really come as much of a surprise, the real news - which is likely much more exciting to those who will be able to partake - is Model 3s popping up at locations on the East Coast. People in California may see Tesla vehicles all the time, and there are a plethora of Tesla showrooms in The Golden State, but this isn't really the case in most other parts of the U.S.

The newest locations opened Friday, January 19, 2018, in New York and Boston. The first is at the Tesla store in Manhattan's Meatpacking district, and the other is at Boston's Boylston Street showroom. A Miami location will unveil the car this weekend.

At this point, customers can look at the car and sit in it. However, Tesla is not yet offering test drives. With only one vehicle at each of just a few locations, lines are long. The automaker has already had to set a time limit for each customer during busy times.

If some 500,000 paid reservations weren't enough, reports are showing that people are handing over the $1,000 deposit during these Model 3 viewings. It's not a wonder that Tesla wasn't in a huge hurry to get the car out in the public eye, since the automaker is struggling to fill just a handful of orders, and now the reservations are growing.