How To Polish And Protect Your Tesla Model 3 - Video 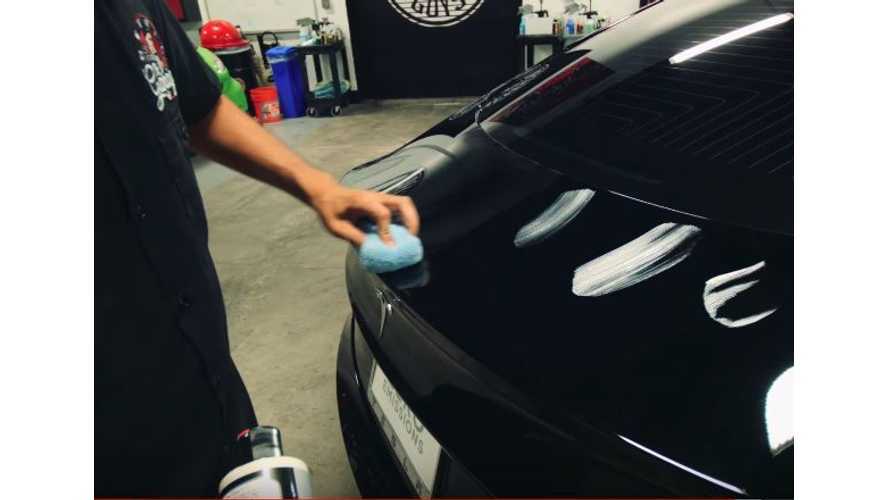 This in-depth video shows you proper polishing and protection techniques for use on your Tesla Model 3.

In the previous video, Nick had the privilege of washing the all new Tesla Model 3 with the TORQ Foam Cannon, and a two-bucket system to give this never before seen car the ultimate scratch-free wash. Upon close inspection of the Tesla in the beginning of the video, Nick observes the presence of scratches and marring. Paint correction is highly necessary to remove the scratches, and return the paint to pristine condition. Nick grabs his trusty TORQ10FX, and enlists the help of Javier and his TORQX. Time is limited, so the dynamic duo will have to work quickly to get the paint to shine like a pearl necklace.To start, Nick picks up V4 All-In-One Polish, and dabs four dime sized drops onto the pad. Before Nick begins to polish, he primes the pad with pad conditioner to avoid any marring that could be attributed to a dried up pad. Nick presses the polisher to the paint to spread the polish, which eliminates any type of flinging. With the polisher on the paint, Nick turns the polisher on and sets it to speed setting one to spread the polish. Once the polish has been spread, Nick sets the TORQ10FX to speed setting six to begin polishing.

While Nick begins polishing, Javier wields his trusty TORQX with an orange medium cutting pad. In order to maneuver around the sleek body lines of the hood, Javier opts to go with a smaller machine to polish the intricate details of this masterpiece of technology. Like Nick, Javier applies four dime size drops around the pad, sprays pad conditioner, and applies the polish to the paint before he begins to spread the polish. As a good rule of thumb and a good overall practice, Javier recommends working in a two foot by two foot square to keep the polishing manageable. Javier spreads the polish on speed setting one, before adjusting the speed to the max setting to begin the correction. When Nick and Javier complete the polishing step, they observe the amazing clarity and shine that has been restored. The unsightly scratches have been removed to reveal a beautiful veneer that was trapped underneath the heap of scratches and marring.

Lastly, since a fine layer of clear coat has been removed; the paint must be protected from contaminants that could etch the paint, and from oxidation that will occur from exposure to the sun. Nick applies a coat of Jet Seal, Chemical Guy's long-lasting paint sealant that could protect the paint for up to twelve months. Jet Seal can be applied to the paint, windows, headlights and wheels to provide the ultimate protection against the elements. Jet Seal can be applied with an applicator, or by dual-action polisher when being used on the paint.