Tesla Model 3 Carbon Fiber Spoiler - How It's Made 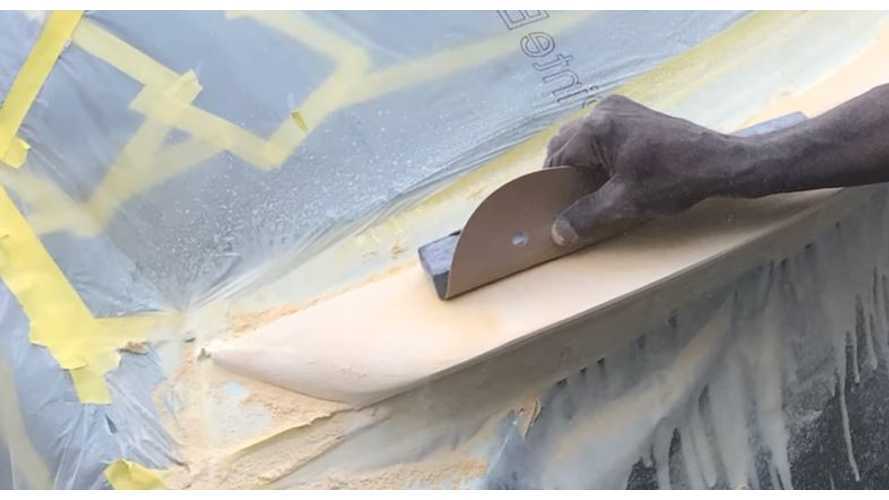 THE MAKING OF A TESLA MODEL 3 CARBON FIBER SPOILER

At EVANNEX, we specialize in designing and developing unique accessories for Tesla owners, and there’s no accessory that is more unique than a custom-designed carbon fiber spoiler. In this blog post and the accompanying video, we’re going to walk you through the design, development, and prototyping process that is required to produce an American-made, high-quality spoiler for Model 3.  If you’ve ever wondered how spoilers are created, I think you’ll find our journey interesting.

The Tesla Model 3 is a relatively small sports sedan, and as a consequence, a well-designed spoiler should not overpower the vehicle’s exterior design language, but rather, complement it.  It should be designed to provide a look that is just aggressive enough while at the same time blending with the compound curvature of the trunk upper surface and the trunk hatch edge. At the end of the day, a spoiler should look like it’s part of Model 3—like it belongs there.

We began our journey toward a unique spoiler for Model 3 by making some fundamental design decisions:

1. The spoiler would span the entire width of the trunk hatch, following the lateral curvature of the rear edge of the hatch down to the panel gaps that separate the upper trunk hatch surface from the upper rear fender surface.

2. The spoiler would be designed to extend the concave curvature of the rear-facing surface of the trunk hatch (where the Tesla “T” resides), emphasizing that curvature in a subtle, yet noticeable way, and...

3. The spoiler front-to-back width would ‘blend’ into the downward sloping longitudinal curvature of the upper trunk hatch surface, so that a side view allows the eye to follow the rear hatch glass across the hatch itself and into the spoiler without any discontinuity.

With these design decisions in mind, we proceeded to specify materials and fabrication approach. Our spoiler would be pure carbon fiber, no fiberglass core or other contaminants. It would be hand-finished in either a gloss or matte look and designed for easy installation using high strength automotive adhesives, without the need for drilling holes in the vehicle.

EVANNEX is located in South Florida, the home of high-end yachts (not to mention some fairly impressive automobiles). That allowed us to tap the experience of the very best carbon fiber craftspeople in the region, who worked with us as we moved from concept to design, on to fabrication and prototyping, and finally toward a final product.

Our journey toward a unique carbon fiber spoiler for Model 3 began in January when we were lucky enough to get one of the first non-employee Model 3s on the East Coast. Work on the spoiler began almost immediately.

Our first inclination (because we’re techies) was to laser scan the trunk hatch surface of our new Model 3, creating a 3-D mesh that would serve as the basis for the design of a solid model of the spoiler. Once that was created, we’d then have to use 3D printing to generate scale prototypes, ultimately working upward to a full-size model of the spoiler cut using CNC to form the basis for a mold. And then we got real and rejected the high tech approach.

Spoiler design is at least as much art as it is science. And when there’s art involved, the human eye and a skilled artisan’s hand can still beat 3-D modeling and CNC, particularly when beauty, as well as form and function, are in play. We decided to go old-school.

Early surface capture and molding work takes days, and it wasn’t easy to give up our new Model 3 while that work was conducted. Follow-on foam modeling, design iteration, prototyping, and final mold creation require still more time. But the sacrifice of not having the coolest car in the region was worth it.

Let’s go through the steps required to design and fabricate a carbon fiber spoiler:

Work began with a primitive mockup that was based on the spoiler design criteria I described earlier. The objective was to “set the shape”—to capture the shape of the rear deck and to determine location of the vehicle lines that define spoiler geometry. Obviously, the primitive mockup is a first draft, taped onto the trunk hatch and intended to give a feel for the ‘rise’ and multiple curvatures of the spoiler.

Model 3 was covered with protective plastic, and Bondo (a 3M product that incorporates a polyester resin and hardening agents to form a rapid setting gel) is used to create mockup number 2. The design remains rough in both a figurative and literal sense. It also is quite clunky, fabricated with the idea that material will be removed until the spoiler we want is achieved. Over 500 years ago, the artist Michelangelo said: “Every block of stone has a stature inside of it, and it is the task of the sculptor to discover it.”  The same holds for a spoiler design—our problem was to find the best Model 3 spoiler inside the primitive mockup. There’s a lot more art than engineering in doing just that.

The rough version is then smoothed a bit, and a cross-sectional cut is taken to judge overall spoiler thickness and heft at this stage. A lot of work remains to be done.

The ‘lie’ of the spoiler is examined to uncover areas where the lower surface of the spoiler must be modified to properly meld with the upper surface of the trunk hatch. Interestingly, the trunk hatch surface has an odd shape with a small ‘hump’ along the design line running from the side window frame before the surface falls off toward the fender. The results of these steps indicated that considerable smoothing and tuning remained to be done.

Lessons learned from rough mockup number 2 led to the development of a high-density styrofoam model that allows easy shaping as the design moved toward a was more ‘svelt’ in appearance. It’s worth noting that design and mockup work begins at the centerline of Model 3 and works outward. The intent is to establish a basic geometry and then shave and cut in a way that moves toward an aesthetic shape that meets the EVANNEX design criteria.

The foam model is coated with a special chemical that isolates the styrofoam from the Bondo that is used to further shape the spoiler. Those of you with a sharp eye might notice that there is a slight discontinuity in the foam model as it is coated. This was intended to allow us to assess slightly different curvatures and heights for the spoiler and select the one that best fits Model 3. The chemically coated model, ready for preliminary mold-making is shown in the last photo.

Once the curvature and height are determined, Bondo sculpting is used to refine the shape of the spoiler. Sculpting is an artistic skill combining the addition of Bondo material and then its gradual removal (via precise sanding) until the design shape is achieved.

Once the shape is finalized on the Model 3, the foam core Bondo prototype must be removed—no easy task. Using shims and a little force, the prototype is removed from the tape that protects the trunk hatch surface of Model 3.

It then moves into the shop for further refinement, symmetry analysis, and mold creation.

With all humility, I’d like to paraphrase the quote I used earlier from Michelangelo, a man whose genius has lasted for half a millennium. “As we made our journey toward the creation of a Model 3 spoiler, our job at EVANNEX was to recognize that the Model 3 design had a spoiler waiting to complement it, and it was our task to discover that spoiler.”  We think once you see the finished product, you’ll agree we did a pretty good job. More on that in Part 2.

All content provided by EVANNEX founder Roger Pressman, author of Getting Ready for Model 3, and professor at Electric Vehicle University.