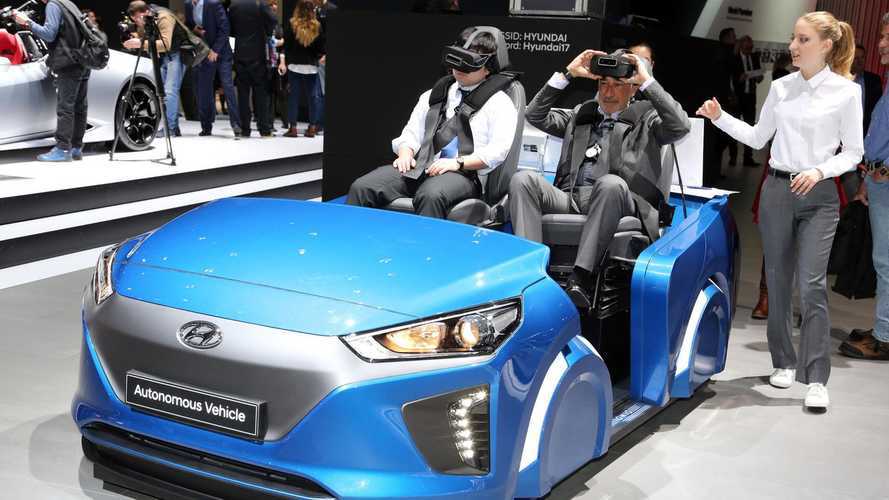 Joined by a virtual reality simulator providing a glance into the future of driverless cars.

Hyundai had two autonomous Ioniqs on display back in January at the Consumer Electronics Show (CES) in Las Vegas and now one of them is celebrating its European debut at the 2017 Geneva Motor Show. Those attending the event in Switzerland also have the possibility to take a glance into the future of driverless cars by hopping on a virtual reality simulator shaped like an Ioniq for an immersive experience to get a better understanding of what lies ahead.

The Ioniq concept looks virtually the same as the production car thanks to the fact Hyundai has managed to cram the Light Imaging, Detection, And Ranging (LIDAR) technology behind the front bumper. Typically, the hardware sits on a car’s roof, but the engineers made efforts to provide a better integration of the necessary components in order to keep the car’s design intact. The added tech works together with the regular aids found in the Ioniq, such as the Smart Cruise Control system’s forward-facing radar as well as the Lane Keeping Assist cameras. Blind Spot Detection radar is also onboard to help the car make lane changes in a safely manner, while a GPS antenna searches for a location of each vehicle. In addition, the very detailed mapping software provides a high level of accuracy to determine not just the location, but also the road gradient, curvature, and even the width of a lane.

Besides the Ioniq, Hyundai is also working on a pair of driverless Tucson fuel cell vehicles at home in South Korea at its Research and Development Campus in Namyang.

Since we’ve mentioned fuel cell, Hyundai is previewing its fourth-gen hydrogen fuel cell tech good for more than 497 miles (800 kilometers) of range in Geneva with the Futuristic FE Fuel Cell Concept prior to an all-new FCV crossover due in 2018.

7 March 2017 - After its successful test drive participation in the streets of Las Vegas, Hyundai Motor brings its Autonomous IONIQ model as an exhibit to the 2017 Geneva International Motor Show.

The advanced autonomous IONIQ model two virtual reality cockpits will give visitors the chance to experience a drive in an autonomous car on the stand.

Moving forward with the use of LiDAR technology, Hyundai Motor has fitted the hardware behind the autonomous IONIQ’s front bumper rather than using the typical roof-mounted approach, retaining the new car’s sleek design. The car’s advanced self-driving systems are kept as simple as possible by integrating existing functions from the production model, including the Smart Cruise Control system’s forward-facing radar and Lane Keeping Assist cameras.

The system also uses a GPS antenna to search for a location of each vehicle and high-definition mapping software delivers pinpoint accuracy for location, road gradient and curvature, plus lane width and indication data. In addition, a Blind Spot Detection radar ensures that even simple lane changes are executed safely.

Hyundai Motor’s latest technology allows the cars to navigate the most challenging situations safely, including high levels of pedestrian traffic, stop lights and signs, road construction and road blocks, speed bumps, dogs, small children and even intersections without traffic signals. Through extensive testing in urban environments Hyundai Motor is continuing to develop and refine its self-driving technologies with the goal of using less computing power, resulting in a low-cost platform that the typical consumer can afford.