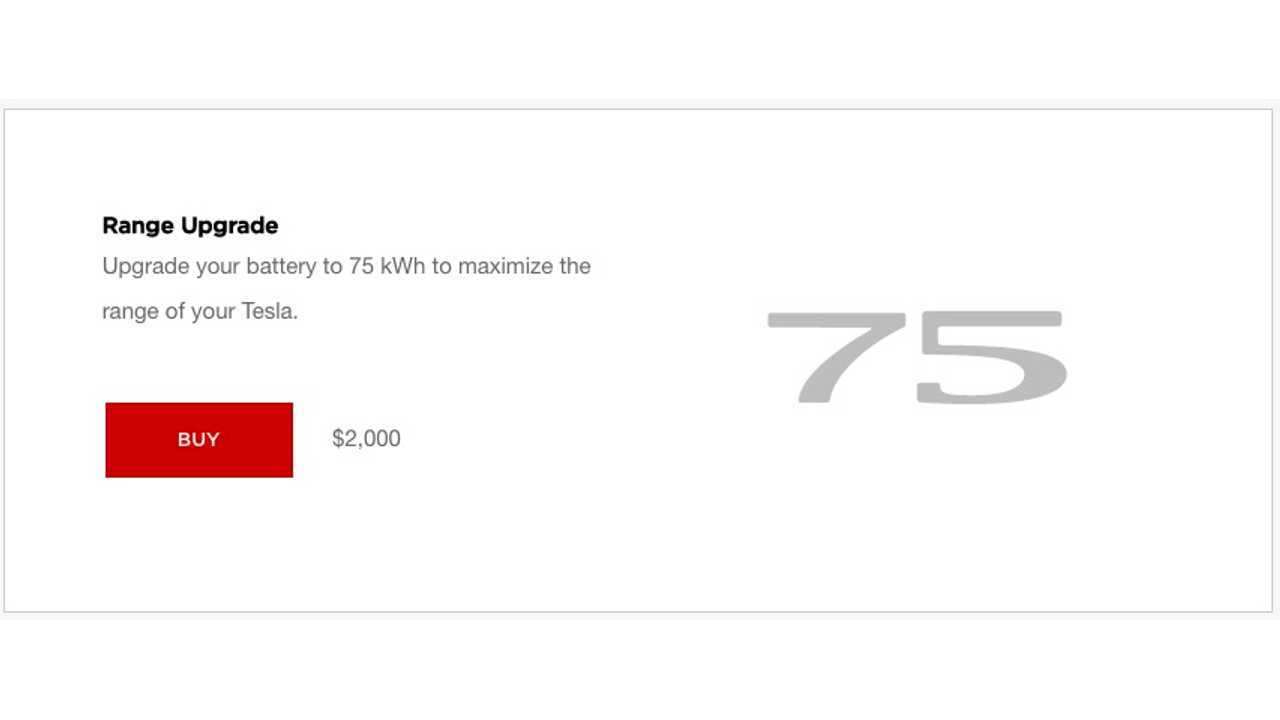 That's a big bump in range for what appears to be a bargain to us.

Effective today, Tesla has officially discontinued the Model S 60 kWh version. This means the base version of the Model S now comes with a 75-kWh battery pack. Tesla communicated the cancellation of the 60 kWh version a month or so ago with this release: 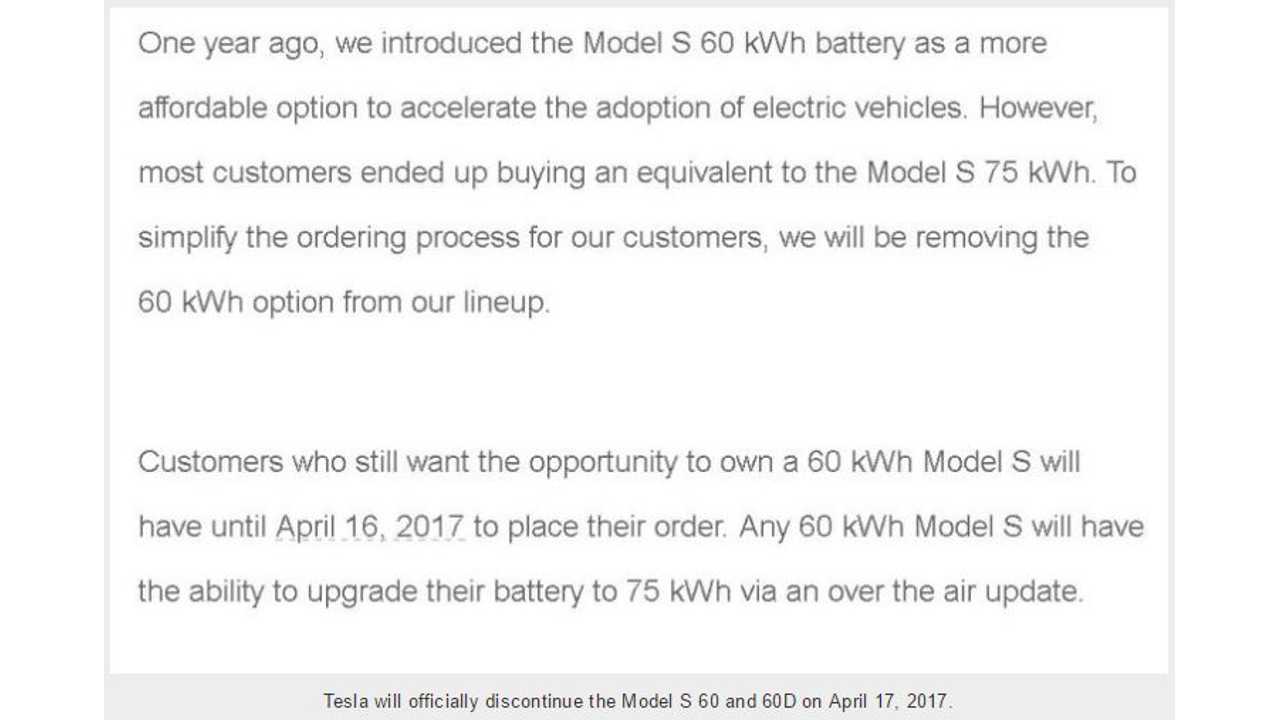 We've now learned that Tesla is making the upgrade from 60 kWh to 75 kWh more attractive by offering it for just $2,000! That's a huge price drop from when Tesla initially announced the upgrade option more than one year ago. Here's how we reported on the 60 to 75 kWh upgrade at the time it was first announced: 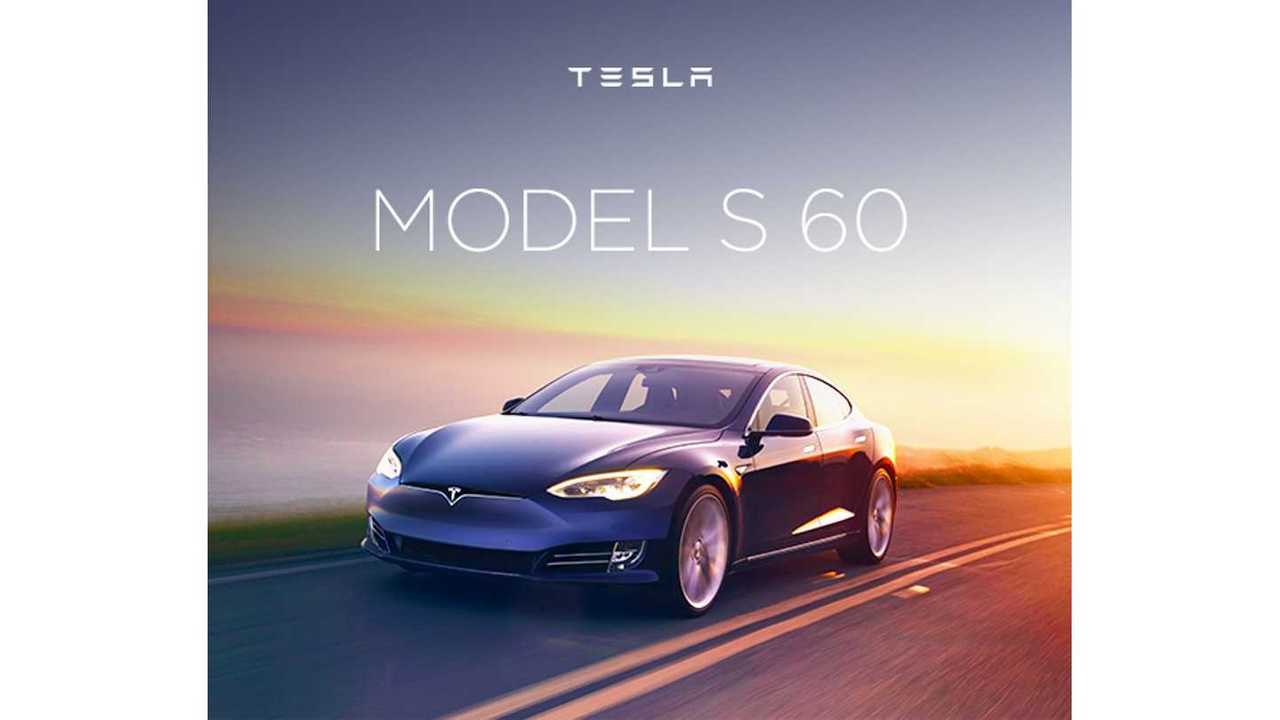 It didn't seem like a bad deal back then, so we'll say that this $2,000 price point is a raging bargain now.

Update:  Shortly thereafter making this deal available, Tesla  reduced the pricing on the 75 kWh versions of the Model S by $5,000 - making that model's MSRP start from $69,500.

"...Model S 60 and Model S 70 owners are being prompted with a very welcomed surprise in the form of a heavily discounted offer for an ‘unlockable’ battery upgrade."

"Teslarati forum user lTRKBLU shared a photo showing Tesla’s 75 kWh in-car Range Upgrade option being offered for $2,000, which represents a near 80% discount from the original $9,000 price tag first introduced in mid-2016. Tesla would later cut the price of the Model S range upgrade to $7,000, which took place earlier this year."

See detailed EPA range data for 60 and 75 kWh versions of the Model S below:

Furthermore, reports are confirming that Model S 70 kWh owners are being offered a $500 upgrade to unlock 5 kWh. This 70 to 75 kWh upgrade originally cost some $3,500. The math on this upgrade comes in at $100 per kWh.

Our recommendation? Unlock those extra kWhs now while this crazy cheap pricing lasts.