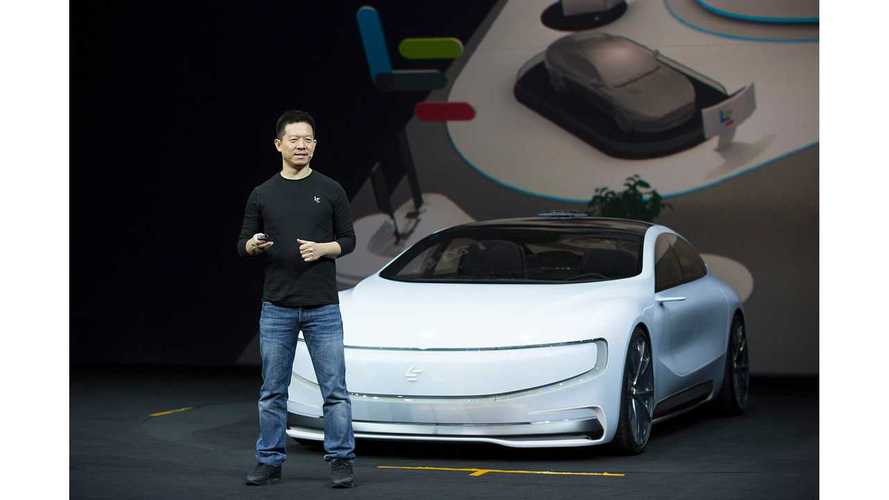 LeEco, the Chinese parent company of Faraday Future, is currently undergoing a massive restructuring, and now an executive reshuffle after earlier bold plans turned out to be well under-capitalized, causing a cash-crunch at the company.

LeEco's founder Jia Yueting is being replaced as general manager of Leshi Internet Information & Technology Corp (LeEco's "Netflix" business, as well as TV and phone making division, and automobiles) by Liang Jun, who earlier joined the company from PC-maker Lenovo Group Ltd. about five years ago.

Update (May 23rd): Statement from Faraday Future's Global CFO, Stefan Krause to InsideEVs stating it is unaffected by happenings at LeEco below

Yueting will remain a chairman of Leshi Internet.

LeEco recently receive a 13 billion yuan ($1.9 billion) investment from Sunac China Holdings Ltd. to put itself on better footing, but it appears that deal appears to have come with strings of better disclosures and executive control over its money.

"Billionaire Jia Yueting will relinquish the day-to-day running of his flagship streaming service, as cash-strapped parent LeEco considers an internal overhaul that will group businesses from entertainment to TVs under its main listed company.

The Chinese technology conglomerate’s founder announced he’s stepping down as general manager of Leshi Internet Information & Technology Corp., a Netflix-like service and phone- and TV-maker. Jia will remain chairman to devise longer-term strategy and oversee a corporate revamp intended to improve transparency -- an area in which Jia admitted LeEco’s been lacking."

It's not clear what will happen with the LeEco LeSEE electric car project, and more specifically, EV start-up in the US, Faraday Future.

"Jia didn’t spend much time expounding on LeEco’s U.S. interests. The billionaire is a backer of electric vehicle maker Faraday Future, which is building a plant in Nevada that at one point was suspended. It remains unclear how the American business, which on one occasion was said to have struggled to pay employees on time, will fit into a re-organized LeECo."

A transcript of an interview with Jia provided by LeEco (via Bloomberg), notes the company wants to distinguish itself legally from the electric automobile components...which doesn't sound like the precursor to good news.

“In the future, we hope LeEco is only formed of two parts: the listed businesses and the auto unit." - Jia Yueting

Update (May 23rd):  Faraday Future reached out to us on the news/article on LeEco’s US operations.

A spokesperson for the company stated that LeEco’s decision on US operations and Yeuting's has no impact on Faraday's "daily operations, the development of FF 91, nor our manufacturing plans in North Las Vegas in any way."   The company also stressed to us that "no layoffs are planned for FF employees."

Faraday Future’s Global CFO, Stefan Krause, also added this note to be added to our coverage:

“Hearing about layoffs at our strategic partner LeEco is discouraging. However, I want to be clear that these layoffs have no impact on Faraday Future. We remain committed to our immediate goals of diversifying FF’s investment sources and getting FF 91 on the road in 2018, and we remain confident in the outlook for diversifying FF’s global investment.”