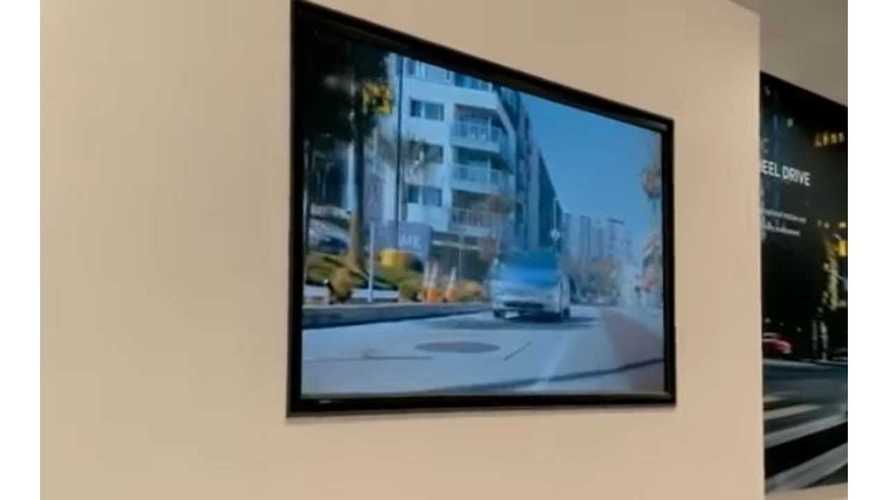 Above: New spy video shot of a Tesla Model 3 clip being played at a Tesla store in Zaventem, Belgium (Instagram: egearmedia)

Usually, in the business world, it’s considered a good idea to encourage customers to buy your product. However, if you’re sailing through uncharted territory in a new and rapidly evolving industry, it sometimes makes sense to throw out even the most basic of rules. And when you already have nearly 400,000 orders for a product that isn’t going to be available for another year, and that you won’t be able to produce in enough numbers to meet demand for some time after that, it might be time to try some “anti-selling.”

*This article comes to us courtesy of Evannex (which also makes aftermarket Tesla accessories). Authored by Charles Morris

In a conference call following Tesla’s release of its third-quarter financial results, CEO Elon Musk said that that’s just what sales personnel are doing with Model 3. “When somebody comes into our store to buy a Model 3, we say well why don’t you buy a Model S or an X instead? So we anti-sell the 3.” According to Musk, the first year of Model 3 production is already sold out, so why not have a go at upselling the customer to an S or an X, which they can buy right away? A lot of people order a Model 3 anyway, he said, but it’s worth a try. Back in 2015, Tesla employed the same strategy with regard to Model X.

the "3" from a symbol to the numeral on their website (Image: Tesla)

In general, Tesla is the least “salesy” of automakers - a study by market research firm Pied Piper ranked the brand dead last when it came to salesmanship. While sales gurus doubtless consider that a great failing, car buyers may see things differently. Tesla employees eschew the typical car dealer hard sell because they know it’s one of many things about the current auto industry that consumers hate.

All that said, Tesla is beginning to take some steps to market the upcoming Tesla Model 3. Recently, visitors to the company’s European sales centers have noticed a nifty little video of the new Model 3 playing on the wall screens. It’s only a few seconds long, and it’s nothing that you could really call a commercial. However, it’s the first spot of its kind that’s been seen in stores, and that’s kind of exciting - this short video clip may be subtly announcing that a new era of transportation is about to begin.