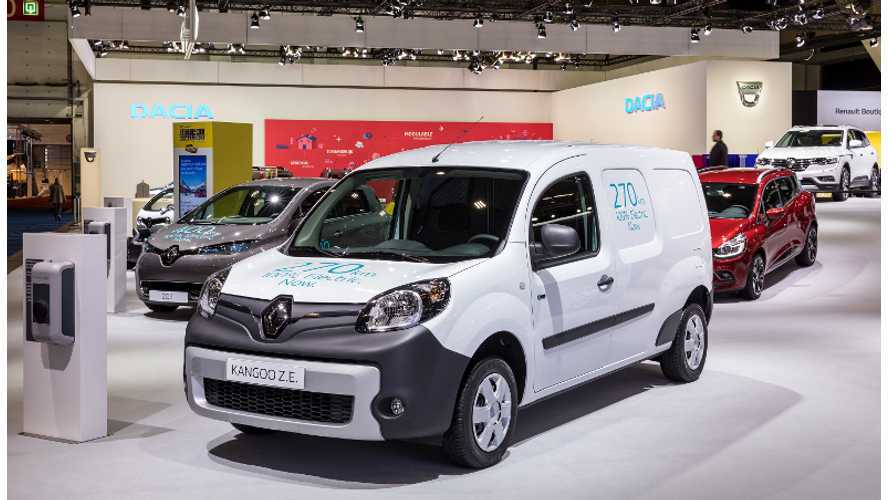 As promised, Renault has introduced a new larger battery equipped Kangoo Z.E. with up to 50% more range.

And while we are happy to see the upgraded "ZE 33" model, and its 33 kWh pack (instead of 22 kWh), the vans battery stills looks tiny as compared to the recently updated ZOE with a 41 kWh pack.

Renault pegs the new Kangoo ZE 33 at a range of 270 km/167 miles under the NEDC rating system, which translates to about 200 km/125 miles in 'real world' driving conditions.

Renault has also utilized a new electric motor found originally on the ZOE R75/90, rated at 60 hp (44 kW), and has replaced the original (and fairly weak) charging system.  The new Kangoo ZE can charge at near twice the rate of the previous version - up to 7 kW.

As you can see, the 7 kW charging capability still isn't near on par with the 22 kW charging found in ZOE.

Anyway, the new Kangoo Z.E. is still far better then the previous version, so perhaps we should not be too critical.  Renault promises the "ZE 33" will be available on the European market from mid-2017.

New Kangoo Z.E. now proposes a range of 270 km NEDC compared with 170 km for Kangoo Z.E. In real use, on a delivery cycle3***, the vehicle would have a range of around 200 km with a single load. New Kangoo Z.E. has a greater available range than any other electric LCV.

New Kangoo Z.E. cuts charging time thanks to a new-generation 7 kW AC charger. A full charge takes around six hours from a 7 kW WallBox. With this more powerful charger, New Kangoo Z.E. recovers a range of 35 km in just one hour of charging (in a temperate climate).

New Kangoo Z.E. features a real innovation in the world of electric LCVs: a heat pump linked to the air conditioning, maintaining range in cold weather.

New Kangoo Z.E. is built in France and will go on sale in Europe from mid-2017."

Bonus video (below):  Check out the new Kangoo ZE getting built at Renault's factory in Maubeuge (hat tip to Adrian!)

Like its consumer electric vehicles, LCV customers can also take advantage of new connected services like Z.E. Trip and Z.E. Pass on New Kangoo Z.E. These services enable an easy charging on one of Europe’s 80,000 public EV charging points. In 2017, Renault Pro+ will also be rolling out a number of other connected services dedicated to business users, starting with two prioritary service families, “Fleet Management” and  “Predictive  Maintenance”.

“Fleet Management” is a telematic service which gives access for fleet managers to:

“Predictive Maintenance” involves issuing real-time information on the vehicle’s condition. Based on the predictive data analysis system, it helps to: