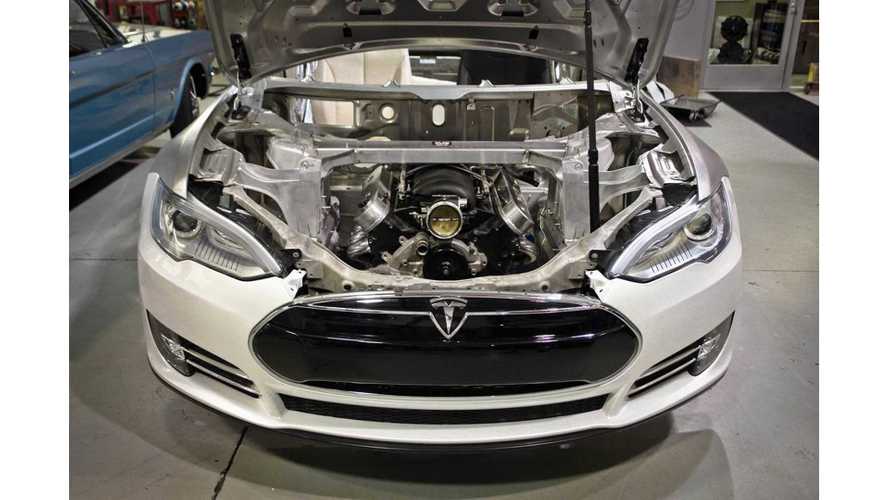 Tesla tuner Unplugged Performance alerted us to the image seen above.  Unplugged stated:

"We are working hard every day to further the potential of the Tesla Model S. What we are NOT working on is a Chevy LS3 swap into a Tesla. NEVER. However, someone else apparently is. Thoughts?"

"This photo we found on East Bay Muscle Cars‘ Facebook page had us excited, shocked, and confused, all in one fell swoop."

"Being an all-electric car, the Tesla Model S was never outfitted for an internal combustion engine, especially a 480 horsepower LS3. But why an LS3 and not another more powerful LS engine, to be in closer reach of the Tesla Model S P85D’s performance?"

The story doesn't end there...

"The guys over at East Bay Muscle Cars haven’t given out much info about the build, and that’s because it was a joke all along."

"EBMC was actually recruited by Draper University in San Mateo, California, to take a Tesla Model S shell and turn it into a reception desk. It came out awesome, nonetheless, but during the early stages of the build, the guys at the shop couldn’t help themselves and dropped an LS3 into the “frunk” of the Model S shell."

Here's a look at the completed desk.

"We’re not going to lie; once we found out the photo was a joke, we were a little disappointed. From the angle of the photo, it looks like the engine fits really well, but we can’t actually tell how far back the engine is really sitting."

Lastly, it seems the fellas over at Unplugged perhaps put some thought (even if only jokingly) into actually fitting a V8 gas engine into the Model S.  Here's some info on what that would entail: