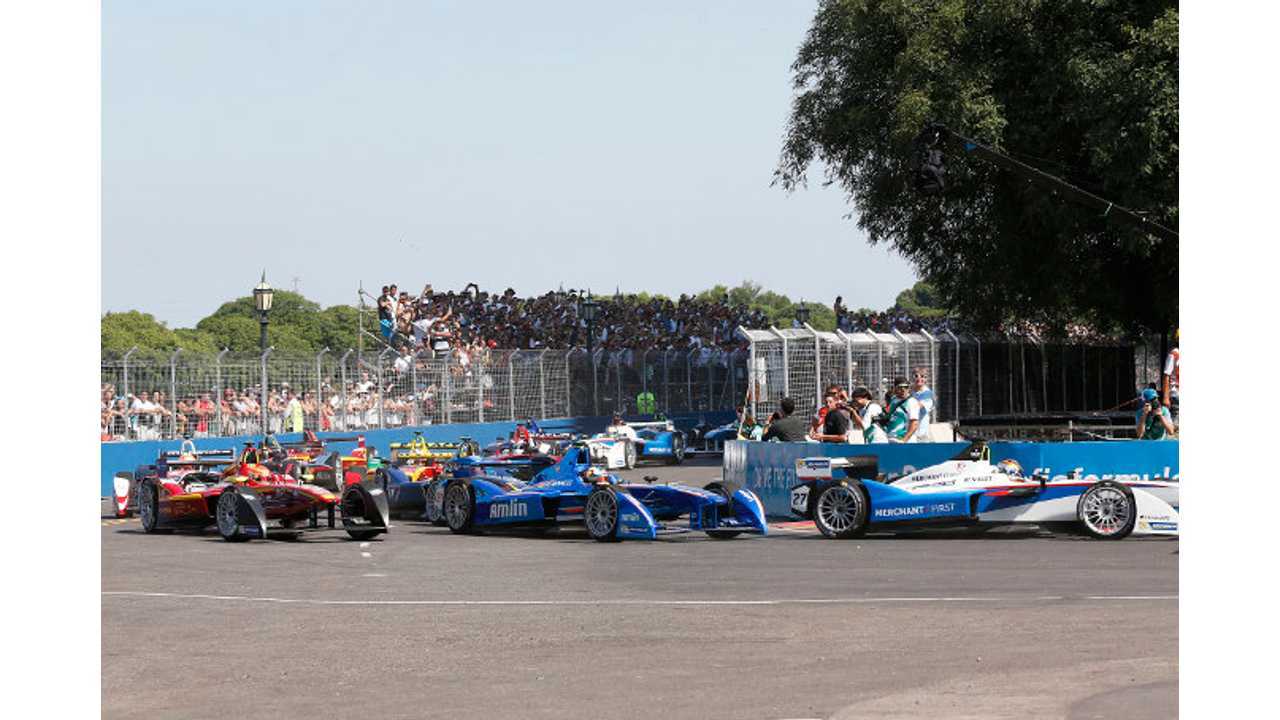 As was announced earlier, Formula E is looking to diversify the race cars in season 2.  In the first season, the cars were all the same in an effort to make to the series very competitive and the cost of entry cheap.

The move from a common car to a whole set of different cars will be gradual to not exacerbate costs, especially for smaller teams, as the series is still in its infancy.

The official statement from the Federation Internationale de l'Automobil revealed that in the second season there will be eight manufacturers that will supply powertrains to any teams participating in 2015/2016 Formula E season:

In the second season, teams will still get the same car chassis (the Spark-Renault SRT_01E) and the same battery packs, but the electric motor, inverter, gearbox and cooling system will be developed individually by each manufacturer and available for any team at fixed maximum cost.

"The Federation Internationale de l'Automobile has today revealed the eight manufacturers who will enter the all-electric FIA Formula E Championship in season two – further increasing the series’ credentials as a test bed for the development of electric vehicle technology.

For the inaugural 2014/2015 season, the 10 Formula E teams all compete using identical single-seaters – the Spark-Renault SRT_01E – utilising a powertrain by McLaren Electronic Systems. From the 2015/2016 season, the series will become an open championship allowing manufacturers to pursue their own in-house innovations, beginning with the development of bespoke powertrains.

In order to limit costs and promote investment and innovation in the most important areas, the manufacturers’ scope is initially limited to the powertrain – specifically the e-motor, the inverter, the gearbox and the cooling system. All other parts on the cars will remain as they are, with the aim being to prevent costly aerodynamic developments."

Batteries will be the next step in season number 3, while the ultimate goal of having different cars will be achieved in season number 5 with a switch to a one-car-per-driver (instead of today's two cars per one driver per race) format. Batteries would need to have twice the energy to hold up for the whole race.

"The next regulation progression – scheduled for season three - will see manufacturers extend their efforts to the batteries, with the objective being the use of a single car per driver during races from the fifth season."

“The launch of the FIA Formula E Championship has been a great success. This innovative and spectacular discipline is in the process of gaining its sporting and technical credibility and the arrival of manufacturers for its second season is the next stage in Formula E’s development.”

“The gradual opening up of the regulations will promote innovation, while at the same time keeping costs under control. The solutions chosen by the manufacturers will hopefully lead to rapid development of the future-focused technologies at the heart of Formula E. In terms of the manufacturers chosen, we are satisfied with the quality of the applications received and the number of manufacturers becoming involved reflects the huge interest generated by Formula E.”

“It’s fantastic for Formula E to have this many manufacturers wanting to be a part of the championship after just four races, and shows great confidence in the series. One of our objectives from the beginning was to promote technology competition but we cannot do that as organisers of the championship, we need ‘actors’ to join and to develop technologies to fight against each other in the races. Through this fight we improve the technology and then with this improved technology we improve electric cars in general. We expect more manufacturers to join from season three onwards and we’re already talking with many different manufactures and also OEMs.”

Here is longer quote from an interview with Alejandro Agag:

However, the aim of having many constructors competing, must not lead to an escalation of costs, a point about which Agag is adamant. “Cost control is one of the key elements of our project: we are aiming for gradual technical development, while focusing on the things that really count.

“That’s why, next season, work will be allowed on the powertrain, the inverter, the energy regenerators and on the overall energy efficiency. Furthermore, each team will be able to ask a given constructor for its powertrain to be supplied at a fixed maximum cost, thus allowing even the smaller teams to benefit from technology that would otherwise be unattainable. As from the third season, different batteries will also be allowed, although there will still only be one chassis supplier. It’s the fifth season that will see a significant change, in that instead of the current use of two cars per race, each driver will use just one, thus requiring a doubling of battery life. It’s an ambitious target and in order to reach it, competition between these constructors and others that might participate in the future, will be vital.”

When it came to Formula E’s ability to attract competitors, Agag seems confident. “I am convinced there will be more constructors as from the third season, including OEMs. I think that already, behind some of the candidatures announced today by the FIA, there are some OEMs, who however want to maintain a cautious approach to see if the championship grows in strength. Discussions are already taking place and they will continue in the coming months, with the aim of having them with us from 2016/17.”