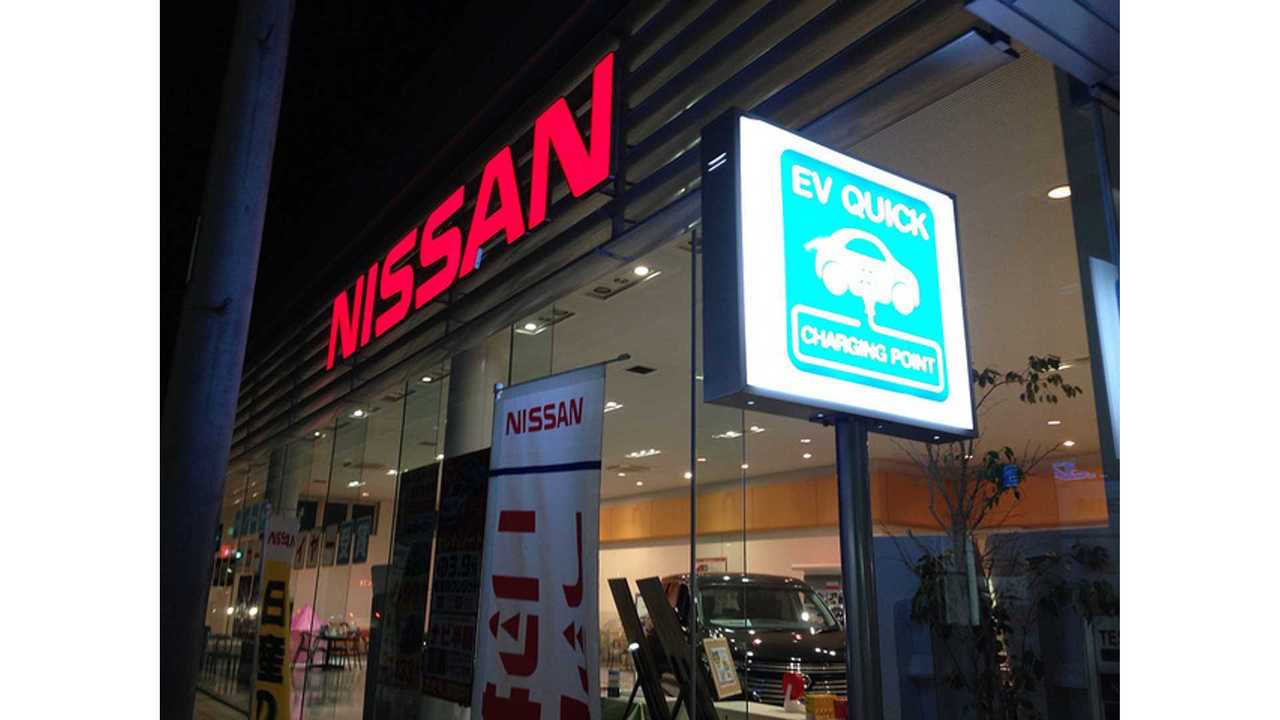 Announcement of a joint project by four automakers in Japan

LEAF gets a quick charge

Almost one year ago, four automakers, Toyota, Nissan, Honda and Mitsubishi Motors, announced an agreement to work together to promote charging infrastructure development and to build a charging network in Japan.  Now we are seeing results and an update from the CHAdeMO association this month.

Normally competing companies, these automakers joined forces to utilize part of the 100.5 billion yen (or almost $1,000,000,000) of government subsidy.

The Japanese program covers charger cost and two-thirds of the installation cost, which means that companies can get CHAdeMO QC in the ground for a price comparable to low power AC charging stations.

"In March 2013, METI launched a large‐scale project named “Next Generation Vehicle Charging Infrastructure Deployment Promotion Project” using 100 billion JPY of supplementary budget for Fiscal Year 2012. With the objective of strategic and quick deployment of charging infrastructure, this project has encouraged municipalities and expressway operating organizations nationwide to issue charger deployment plans, which were made public starting in April 2013."

"This groundbreaking project not only subsidize the cost of chargers but also 2/3 of the installation costs for the municipalities and organizations who intend to install public chargers based on their published charger deployment plan, which shall accelerate the deployment of charging infrastructure along the principal routes nationwide."

"In addition to the government support, in July 2013, four automakers – Toyota, Nissan, Honda, and Mitsubishi Motors – announced the launch of the “PHV/PHEV/EV Charging Infrastructure Promotion Project.” However, as these projects are quite large‐scale, many municipalities were not able to follow through on the concrete installation plan within the initially set time frame. As a result, a one year extension to the original February 2014 deadline for application for these funds was agreed."

Originally, we heard that the “Next Generation Vehicle Charging Infrastructure Deployment Promotion Project” will enable the installation of 4,000 QC and 8,000 AC charging spots, so this new build of 1,700 QC and 3,000 AC stations seem to be only one part of the the ultimate goal.

Currently, Japan has just over 2,000 CHAdeMO chargers, so we should expect to see a huge increase of new installations in the coming months.

Some companies already announced plans do deploy hundreds of chargers (AC and DC) around Japan: NEXCO is to install over 200 charging stations, FamilyMart will install 500 chargers at their stores nationwide, JTB Corporate Service will install 1,000 chargers at accommodation and leisure facilities.

These new sites will likely be linked so that all the users and charging station owners are in one large network.

More info can be found in this presentation.