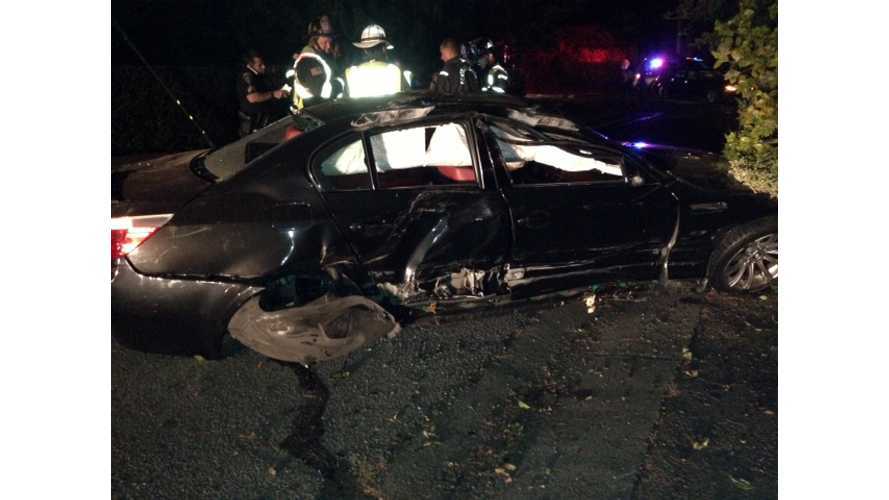 Over at the Tesla Motors website, there's a "Customer Stories" section that highlights some of the positive Model S experiences.

This particular story is both positive and negative.

As Model S owner Vernon Huang tells us below, the safest vehicle in the US sustained damage (the negative part of the story), but all occupants were unharmed (the positive).

Huang notes that, as you'll see in the video, he did not come to a complete stop.  However, the police report primarily faults the BMW M5 driver.

I've used this incident as a teaching point to my teenagers that no matter how defensively you drive, or how confident you are of your surroundings, disaster can always strike. Given this reality of life, I'm glad that I drive the safest car on the road.

I wanted to write and share what I experienced when my Tesla Model S was involved in a major traffic collision. I had been driving my 60kwh Model S for about three months. I was thrilled with my purchase, having done a family road trip from the San Francisco Bay area to Southern California and Las Vegas over spring break. We never experienced any range anxiety, paid a grand total of three dollars for charging the entire trip and astounded bellmen and valets everywhere we went when the five of us would exit the car and unload seemingly endless amounts of luggage.

Needless to say, I was devastated when we were involved in a major collision. My wife and I, as well as another couple, were going home on a Friday night - my wife's birthday. We were crossing a four way blind intersection in a quiet, unlit, residential neighborhood, when without warning, out of the corner of my eye, I saw headlights approaching at an extreme rate of speed and heard the loud roar of an engine. I barely had time to shout an expletive before the other car struck us and my airbags deployed.

It turns out that a teenage boy driving a BMW M5 at approximately 60 miles per hour completely ignored his stop sign and impacted the front end of my Model S. Everyone in the car confirmed that they were all right and exited the car. I called Tesla service at almost midnight and, to my surprise, someone answered the phone and was able to give me advice on securing the car for towing.

The police and fire department arrived within minutes and informed me that the other driver had come to a stop down the road; I had previously thought it was a hit and run. When I examined the other car, I saw an unbelievable amount of damage. The BMW had hit me hard enough that he had flipped and rolled his car at least twice and bounced off a large tree; he was on his wheels facing the opposite direction of his initial travel, and the car had experienced an incredible amount of damage from the impact and rollovers.

My Model S, on the other hand, had damage to the front bumper and looked pristine rearward of the bumper. When I looked in the bushes, I saw that the BMW had hit me with enough force to completely snap off a rear wheel and suspension. Luckily, the driver of the BMW was dazed but otherwise appeared uninjured.

I am enclosing some pictures of the cars involved in the collision as well as dashcam footage. When you examine the images taken at the moment of impact, you can see that the Model S barely moved laterally when the M5 hit our front end. The occupants experienced a slight jostling and the only injuries sustained were bruises due to impact from the lower airbags.

In a previous iteration of my career, I was a Navy Flight Surgeon assigned to a Marine Corps F/A-18 squadron where my training and duties included aircraft mishap investigation. When I examine the aftermath of my incident, I am convinced that fortuitous timing and the solid construction of my Tesla Model S saved our lives, the lives of another couple and prevented four young children from being orphaned.