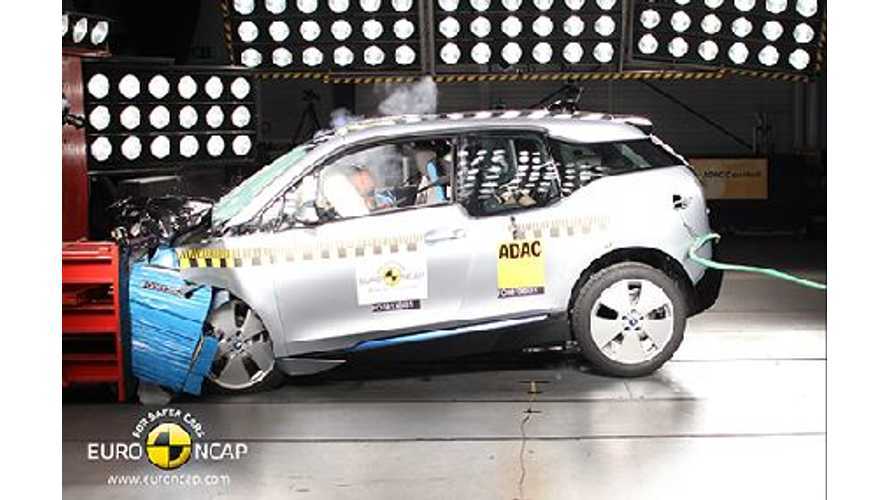 After netting only 4 stars overall in the Euro NCAP crash tests, BMW felt compelled to respond.

The issue, according to BMW, is that Euro NCAP places too much emphasis on areas that don't directly relate to occupant safety.  Euro NCAP would argue that all of its tests relate to safety, be it of the occupant or a pedestrian or of safety assist features that are lacking in the i3.

We understand BMW's argument, but what's fair for all automakers is fair for BMW.  So, the i3 still scores 4 stars overall, regardless of how safe the automaker says its vehicle is in terms of occupant safety.

Notice in the press release below that BMW makes no mention of the 4-star rating?  Instead, BMW focuses on only the areas in which the i3 got 5 stars.  Further note that BMW could make a few simple changes (a seatbelt reminder for rear seats and some hood tweaking to up the safety assist and pedestrian safety scores) to get to 5 stars, but we doubt the automaker will.

Here's BMW's response to the Euro NCAP's 4-star rating for the i3:

I3 Euro NCAP Pole After Crash

Munich. The BMW i3 achieved the highest rating of five stars in the Euro NCAP crash tests governing occupant protection and child protection that coincided with its market launch. As expected, the electric car matches the performance of the best conventionally powered vehicles in its segment in the area of passive safety. The Integral safety concept covers everything from collision avoidance to Intelligent Emergency Call and also meets requirements above and beyond Euro NCAP.

Its revolutionary new vehicle concept allows the BMW i3 to offer customers not only smile-inducing driving pleasure and outstanding environmental performance, but also top marks in terms of safety. An integral safety concept put together for the BMW Group’s first all-electric model includes everything from driver assistance systems focusing on collision avoidance, via passive safety to the Intelligent Emergency Call function – and complies with all global accident protection standards.

The aim of BMW’s integral safety concept is to achieve an optimum combination of active and passive systems that is geared to real-life traffic and accident situations. Among the active measures included as part of this concept are preventive systems which help the driver to avoid accidents. The Driving Assistant Plus system available for the BMW i3 includes both Collision Warning and Pedestrian Warning with braking function. Unique in the segment, this system helps – in urban traffic, in particular – to either prevent collisions or significantly reduce the intensity of the impact. Meanwhile, precisely defined load paths, generously sized deformation zones, a passenger cell whose strength allows it to serve as a survival space, and electronically controlled restraint systems with precisely interlinked functionality team up to optimise occupant protection if a crash is unavoidable. Likewise unique in this segment is the Intelligent Emergency Call function with automatic vehicle location and accident severity detection – a standard feature in the BMW i3. This system, which automatically establishes a telephone link with a call centre, thus cutting down the time it takes for the rescue services to be alerted, earned the BMW Group the special Euro NCAP Advanced Award from the European crash testing institute in 2010. As things stand, the standard testing process still does not include the Intelligent Emergency Call function in its assessments. Legal requirements stipulating the inclusion of a system of this kind in all newly registered vehicles across the EU will not come into force until 2015.

The effectiveness of all the passive safety systems in the BMW i3 was analysed during the car’s development process in numerous crash tests conducted by the BMW Group’s accident research specialists and in cooperation with independent experts. As part of this process, all the accident scenarios referred to for vehicle registration processes and consumer protection tests around the world – above and beyond Euro NCAP testing – were taken into account, including an impact by another vehicle against the rear of the BMW i3 and a roll-over situation.

An extremely rigid passenger cell made from carbon-fibre-reinforced plastic (CFRP) and the precise interplay of its restraint systems allowed the BMW i3 to record outstanding results for adult occupant and child occupant protection in the Euro NCAP crash test. The testers noted an exceptionally low risk of injury in both front and side impacts, as well as in the Pole Side Impact test. Particularly striking here was the low degree of deformation in the CFRP passenger cell, which also enhances the effectiveness of the restraint systems.