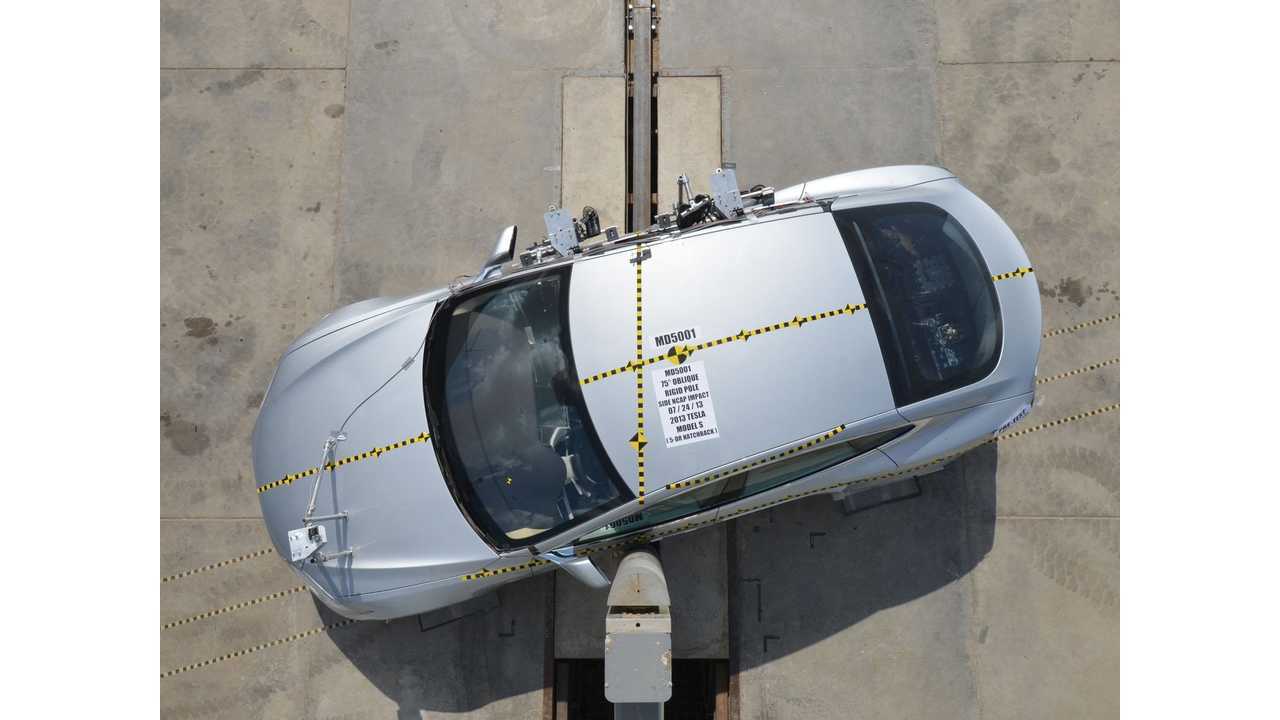 Within days of Tesla reporting that the Model S set a new NHTSA Vehicle Safety Score Record, the NHTSA responding by posting this (alongside an image of the crashed Model S) on its website:

"The National Highway Traffic Safety Administration is committed to improving safety on the nation’s roadways and helping motorists make informed decisions about new or used vehicles they are considering purchasing. The agency’s 5-Star Safety Ratings program is designed to provide consumers with information about the crash protection and rollover safety of new vehicles beyond what is required by Federal standards. One star is the lowest rating; five stars is the highest. More stars equal safer cars. NHTSA does not rate vehicles beyond 5 stars and does not rank or order vehicles within the star rating categories. In addition, the agency has guidelines in place for manufacturers and advertising agencies to follow to ensure that accurate and consistent information is conveyed to the public."

The NHTSA is obviously  implying that Tesla made a few mistakes in reporting on Model S safety.  Let's examine what the NHTSA is trying to say versus what Tesla actually stated (note: Tesla's original press release on the subject of NHTSA crash-test safety has not been altered due to the NHTSA's response).

NHTSA:  NHTSA does not rate vehicles beyond 5 stars and does not rank or order vehicles within the star rating categories.

Tesla: Independent testing by the National Highway Traffic Safety Administration (NHTSA) has awarded the Tesla Model S a 5-star safety rating, not just overall, but in every subcategory without exception. Approximately one percent of all cars tested by the federal government achieve 5 stars across the board. NHTSA does not publish a star rating above 5, however safety levels better than 5 stars are captured in the overall Vehicle Safety Score (VSS) provided to manufacturers, where the Model S achieved a new combined record of 5.4 stars.

Where did Tesla go wrong?  Tesla should have stated that the Model S Vehicle Safety Score was 5.4 and not have stated 5.4 stars.  A minor detail that any reasonable individual would overlook as it's the same result, but the NHTSA isn't thrilled with Tesla using the word "stars" there.  Trivial?  We think so.

NHTSA: In addition, the agency has guidelines in place for manufacturers and advertising agencies to follow to ensure that accurate and consistent information is conveyed to the public.

NHTSA Guidelines: NHTSA strongly discourages the use of potentially misleading words such as "perfect," "safest," "flawless" or "best in class" to describe the star rating received by the vehicle. More acceptable phrases to describe a vehicle receiving a 5-star rating would include phrases such as "highest" or "maximum" safety rating or "top" safety ratings or score.

Side Pole Impact With Airbag Deployment

C'mon Tesla...you know you can't say "best."  Would it make any difference if Tesla reworded its headline to read: Tesla Model S Achieves Highest Safety Rating?  No. the result is still the same.  Nothing has changed but a few words that the NHTSA doesn't want used.  The result still stands.

NHTSA: Advertisements that competitively compare frontal crash star ratings or Overall Vehicle Scores of two or more vehicles should occur only if the vehicles being compared are within 250 pounds of each other and within the same vehicle class. Comparisons for frontal crash ratings or Overall Vehicle Scores should not be implied between vehicles where the difference in weight exceeds 250 pounds or the vehicles are of different body styles (e.g., comparisons between a sedan and an SUV, even if of similar mass).

Tesla: Of all vehicles tested, including every major make and model approved for sale in the United States, the Model S set a new record for the lowest likelihood of injury to occupants. While the Model S is a sedan, it also exceeded the safety score of all SUVs and minivans.

Scores Higher Than All Minivans and SUVs

Here Tesla is making a comparison that the NHTSA doesn't approve of "Model S is  a sedan, it also exceeded the safety score of all SUVs and minivans."  The NHTSA would rather not see sedan and SUV/minivan appear in any safety comparison statement.  Once again, this does not change the Model S' score, nor does it mean that the Model S is less safe than Tesla claims.  There is no dispute of the Model S' 5.4 VSS, which is still the highest of any vehicle tested by the NHTSA, including SUVs and minivans.

So, where did Tesla go wrong?  Did Tesla do wrong?  As we see it, the NHTSA is being overly picky and maybe Tesla's copy editor failed to fully comprehend all of the NHTSA's confusing "guidelines," but in no way does any of this imply that the Model S is less safe than Tesla claims.

We don't have to follow those "guidelines," so we'll tell it like it is: the Tesla Model S is the safest vehicle ever tested by the NHTSA.  And no minivan or SUV can match the Model S' VSS score of 5.4.  When it come to NHTSA crash test results, the Model S is the best.

"Guidelines" get thrown out the door here.