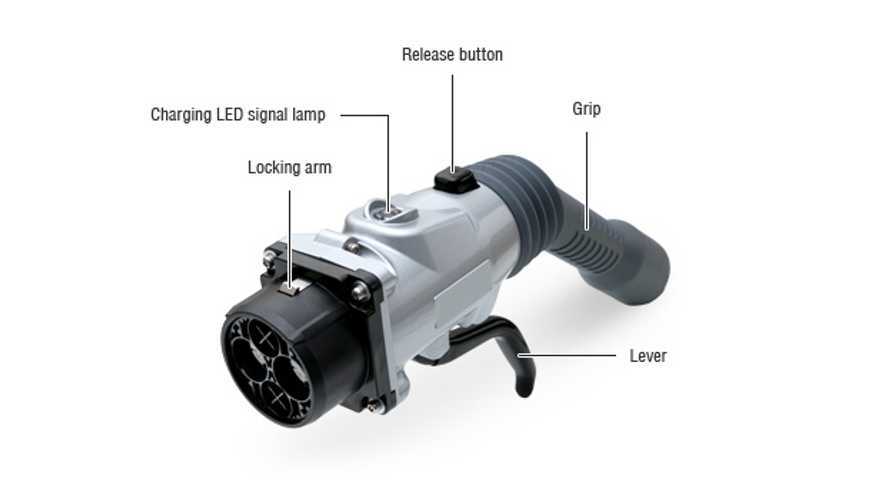 When you look at the facts, CHAdeMO - JEVS (Japan Electric Vehicle Standard) G105-1993, is the only mass market commercially available DC fast charger standard around today.  CHAdeMO is a standard that has been implemented by several large automakers and several dozens of chargers manufacturers.

The first contender to rival CHAdeMO (at least in the US) was, of course, the Tesla Supercharger, but for now it is only a proprietary device, dedicated to the Model S.

The latest arrival, and without any cars, and very few EVSE installations to date is the SAE J1772 Combo (the Spark EV will be first in the fall, followed closely by the BMW i3), along with the European version Combo 2.

But maybe CHAdeMO isn't standing on the losing position. Lets see what the CHAdeMO organization says on the question of power:

One of the key trade-offs when installing a fast charger is that the optimal power output depends on two factors: the cost of delivering the required power at the infrastructure side, and the charging time which is also dependent on the battery performance and state of the technology.

Bringing the required power to the charger includes both the cost of the hardware as well as the cost of connecting to the grid at the required level. The majority of utility companies around the world supported CHAdeMO’s view in eventually setting the most appropriate power level at 50KW.

In the future, as the price of the power units continues to decrease and the performance of the battery continues to improve, faster and higher power chargers be eventually necessary. In fact, the geometry of CHAdeMO connector is designed to allow for 200A, which means it can almost double its power level.

On the other hand, the installation of 20KW units require much less output power and can be an ideal charging solution in certain urban or commercial areas where access to higher power level is not readily available. This flexibility on both ends of the charging power spectrum demonstrates the clear competitive potential of the CHAdeMO in the market.

Nissan, which is main player backing the CHAdeMO standard is saying similar things:

"A CHAdeMO quick-charger delivers 50 kW of high voltage direct current (DC) via a special safety approved connector with specification that can go up to 100kW. By delivering the DC charge directly to the car's power source, the CHAdeMO quick-charger can replenish a battery to around 80 per cent of its capacity in as little as 15-30 minutes."

If this is true, the message is that CHAdeMO can be upgraded (with backward compatibility) from 125 A to 200 A, which at 500 V is 100 kW! Thus, besides aesthetics, there is no real advantage of the other system over CHAdeMO - maybe if others eventually can increase to 150 kW or 200 kW, but not at current 100-120 kW max level.

Another drawback on the original CHAdeMO connector was convenience. Several companies from Japan, like Yazaki and Sumitomo have already issued new designs of CHAdeMO connectors that are simple in use, like that of the J1772 AC plug - just push inside, and click a button if you want disconnect.  There is still no answer for the "second receptacle" problem for Level 2 charging.

Until then, the important thing to realize is that we do not have cars that can utilize power higher than current 62,5 kW maximum from CHAdeMO, or if they do, they only utilize it for a small part of SOC (state of charge) window.

For example, with a 100 kW service, you perhaps could cut LEAF charging time from about 30 to just over 20 minutes (as in the Spark EV, when that functionality is released sometime after the car's launch), but this is best case scenario when temperature aren't extreme.  In a country like Norway or Canada in winter, fast charging can be 2-3 times longer in winter, making a 20 kW charge no different than if you had a 200 kW capability.

Additionally, many people do not use fast chargers to full charge, but rather only  to about 80%, a 10-15 minute process in most cars,  and then they go - they will not notice even less of a difference.

Separately - more power equals more expense, both on the side of device and on the side of utility, which limits the number of places where chargers can be installed.

Based on these factors, we should not count the older standard, CHAdeMO, losing a lot of ground against any of the new arrivals, the SAE J1772 Combo, European Combo 2 or Tesla Supercharger connector.   A more likely scenario is flexible/multiple output station in the more dense electric vehicle areas.

If not for Nissan backing CHAdeMO so fervently, it may have faded somewhat in the face of this new competition.  However, after such a heavy investment in preparing their car for it, in developing their own units, and in building infrastructure in Japan, the US and several other countries, what could they now tell their partners, their engineers, and customers that bought car with CHAdeMO inlet?  It is very unlikely to happen.   CHAdeMO looks to be here to stay, and hopefully will be upgraded to a better plug, and  higher power output, if people really want it.

Moreover, this year CHAdeMO should be issued in  IEC norm (International Electrotechnical Commission) with 3rd party certifiaction, which will make it an easier standard to adopt for new companies outside of actually joining the CHAdeMO Association.

What is interesting to watch develop is if the new arrivals to the fast charging game, have clouded the playing field, and may in fact give Nissan a competitive advantage in the short term at least as other automakers adopting other standards seem reluctant to aid in development of these new platforms infrastructure.

Even if the Combo charger do start to get a foothold, a company like Nissan with a separate J1772 AC outlet already have their bets hedged, they can just add another two pins, making the LEAF able to get access to any charge point.  This currently puts Nissan in the perfect position to sit back and just watch what GM, Ford, VW and BMW do with combo.

With everyone now in the game and looking for market share, the real battle is just beginning.

From Left to Right: Mennekes, CHAdeMO and Combo