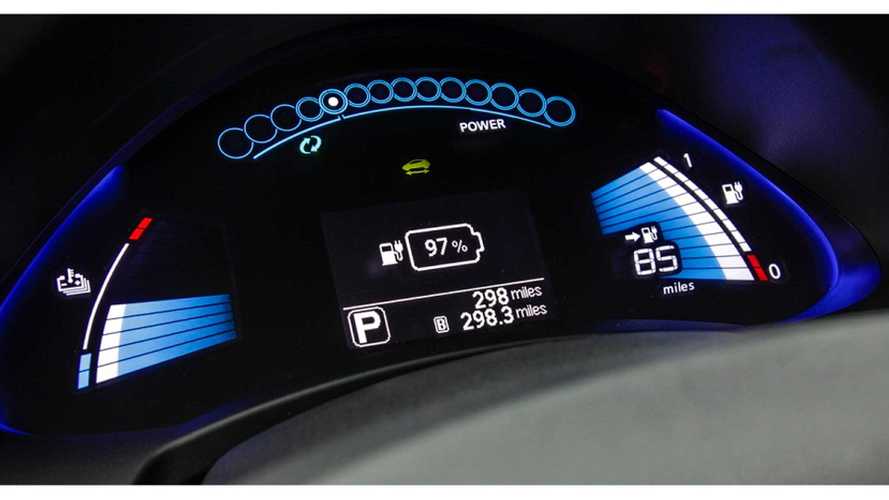 Editor's Note:  The 2013 Nissan LEAF achieves an EPA-estimated 75 miles (as compared to 73 miles for the 2012).  However, a subsequent press release by Nissan says that under the new testing procedure, a 2013 Nissan LEAF with a 100% charge gets up to 84 miles of range, a 11 mile improvement over the outgoing the 2012.  Tony now puts the new 2013 LEAF through its paces to see how range translates in the real world.

A new 2013 LEAF-S wearing metalic slate exterior paint and black interior with a total of 180 miles (290 km) on the odometer was tested today for range autonomy. The car arrived at the Blink charging station at 13520 Evening Creek Drive North, San Diego to top off the car to 100%. The car had started from the owner's house about 8 miles away where it had been charged to 100% and left for 6 hours to allow the automation to balance the 96 cell pairs.

I estimated that the 3.3/3.8kW 16 amp charger would take about 45 minutes to charge back to 100%. Unfortunately, the Blink charging station stopped in only 8 minutes. It is not unusual that a Blink would fail as they very frequently do and fortunately, there was another nearby unit that did work. I plugged the car into the second charging station and it operated for 49 minutes.

Test procedures were similar to the planning for the September 15, 2012 range test in Phoenix and subsequent Phoenix range test demonstration event. Unfortunately, this car does not have cruise control, so I had to manually maintain speed at 100kmh ground speed as measured by GPS; not a fun task, particularly in the somewhat hilly terrain. This resulted in an indicated speed of 65mph on this car, or about 4.6% increase greater than the actual speed.

At 100kmh ground speed, it was estimated that this would yield a target energy usage rate of 4 miles (250 watts per mile) or 6.437 km per kWh (155 watts per km) without climate control. Based on Nissan’s published official range data from Nissan Technical Bulletin NTB11-076a, it was determined that a new car would travel 84 miles (135 km) until “turtle” mode (a reduced power mode to safely get the vehicle off the road before the battery disengages power altogether). This data is also consistent with extensive independent testing, both by myself and many others.

The car had two occupants for the test, both the owner Bob and myself. The combined total crew weight was 450 pounds (205 kg). The weather was absolutely perfect for the event with close to 70F (21C) degree weather, clear blue skies and light easterly breezes. In short, another perfect day in San Diego. Of course, thanks to a change in the 2013 LEAF, we were able to run the climate control fan without powering the heater or air conditioner pump, which we did.

Weather between 1:53pm and 3:53pm at nearby Montgomery Airport (KMYF) in San Diego:

Weather between 1:53pm and 3:53pm at nearby Palomar Airport (KCRQ) in Carlsbad:

The course selected was an 85.8 mile (138 km) loop as measured on Google Maps, starting and ending at the same Blink charging station at 13520 Evening Creek Drive North, San Diego, California and began with:

Both trip odometers, miles/kWh, average speed, timers, etc., were reset by the disconnect of the 12 volt battery earlier. Headlights were off, climate control off (except fan) and tires set to 36 pounds per square inch (2.48 bars) pressure.

A stored energy display meter (Gidmeter) was installed. A new LEAF in optimum condition will show 281 units reported by the LEAF’s automation, for a total of 281 x 80 watt hours per unit = 22.48 kWh stored in the battery. This value, referred to in the LEAF community as “Gids”, is alternately displayed as a percentage of 281 (281 would equal 100%). Of the 22.48kWh stored, the LEAF has 21 kWh available to use to propel the car and operate it's various systems, therefore at 4 miles (6.437 km) per kWh of economy multiplied by the 21 kWh available will equal 84 miles (135 km) of range autonomy. The LEAF battery has an advertised capacity of 24 kWh.

The Elevation Profile Of The Route

The fuel capacity gauge segments were observed to be 12 of 12 illuminated, as were the battery capacity segments. The dash display of State Of Charge (SOC) showed 100%. Battery temperature segments displayed 6, indicating temperatures between approximately 50F (10C) to 100F (38C) per Nissan service manual documents. Finally, the “Distance to Empty” meter, known amongst LEAF owners at the "Guess-Oh-Meter" (GOM), was observed displaying 84 miles.

We got underway at a bit past 2pm due to several problems with the car. First, it would not recognize the key, nor go to READY mode. Also, it kept referring to operating the parking brake on the dash display. I decided to do a reset of the computer with a disconnect of the negative lead of the 12 volt battery. The car then did turn on properly, however it would not stay in Drive; it kept popping into Neutral.

I was ready to give up and consign myself to just driving to the dealer for repairs, but it finally stayed in Drive. Subsequently, at the end of the test, when I turned the car off and then back on, it did the same routine of popping out of D. I used ECO mode mostly because it's easier to modulate the speed.

One small surprise was that the dash SOC% meter matched the the Gidmeter exactly at LBW and VLB (17% and 8% respectively).

If the car had gotten 4.0 miles per kWh of economy, it likely would have made 84 miles.

There is no more nor any less range with a 2013 LEAF under these conditions that a 2011 or 2012 (when those cars were new with fresh batteries).

For comparison, a brand new 2012 LEAF-SL was driven on Nov 4, 2012 in Phoenix with only 138 miles on the odometer (and a recent production date) ran a course and parameters in similar weather as the Sept 15, 2012 LEAF Phoenix range autonomy demonstration. The key differences from that test to today's test is that this 2013 LEAF was as much as 200 pounds heavier as tested, the air in San Diego today was slightly more dense, the terrain had substantially larger elevation changes (although both tests started and ended at the same elevation), and the battery was cooler.

The results for the 2012 LEAF last year were:

The car was driven an additional 4 miles to a charger when these readings were recorded:

I'd like to thank Bob for volunteering his car, and Phil for loaning me his extra Gidmeter.

Postscript:  Tony previously headed up the largest independent test of LEAFs with battery capacity loss that (in-part) prompted Nissan to take corrective action for LEAFs that were  struggling in the extreme hot weather places in the US, like Phoenix.  Our thanks to Tony for this comprehensive 2013 LEAF range road test.