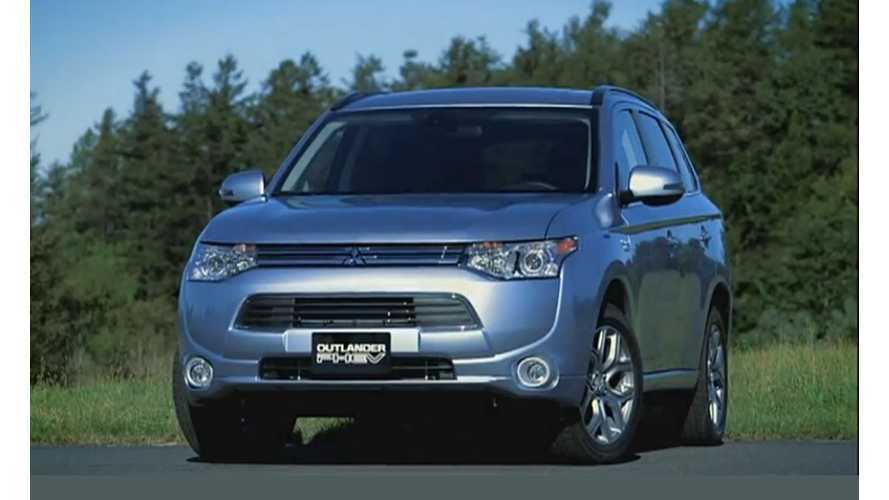 The Outlander PHEV is a four wheel drive, extended range plug-in SUV, and the first of its kind to hit the market when it goes in sale in January 2014 in the US.  The standard gas version debuts in September.

However, in Japan, the vehicle officially goes on sale today, and with that release comes an extended promotional video (below) of the vehicle that gives us a real good tutorial on the vehicle.

As a refresher, Mitsubishi says the car can travel up to 60 km (37 miles) on just electricity, and has a top electric speed of 120 km/hr (75mph).   It should be noted that the range figure is based on the very forgiving JC08 standard.  We expect a more realistic range rating of about 25 miles when it gets rating in the US by the EPA.

The Outlander PHEV is electrically powered by a 12 kWh lithium battery, and also by a 2.0-liter 4-cylinder MIVEC gas engine.  The company says this combination gives the plug-in SUV a 67 km/liter fuel efficiency, which is about 157 miles per gallon.  Again, allowing for conversion to US standards, we estimate about a 80 MPGe rating.  Extended range fuel efficiency is rated at 18.6 km/l (44 mpg) in Japan.

So, if you want to see the Outlander PHEV in action, check out Mitsubishi's promo video below (but beware of serious overacting by some European actors for the english cut of the video):